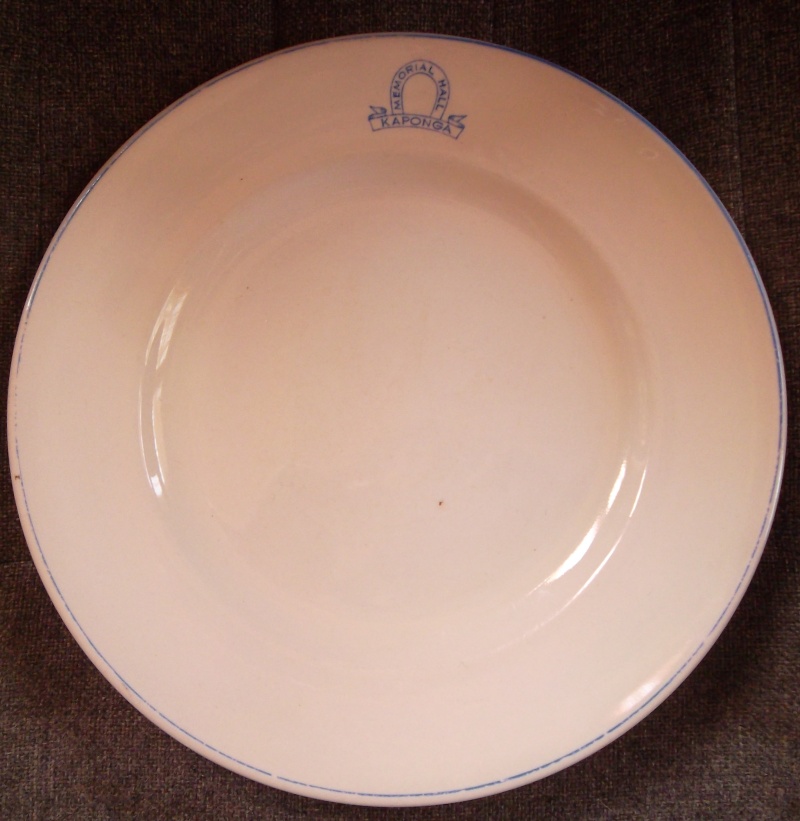 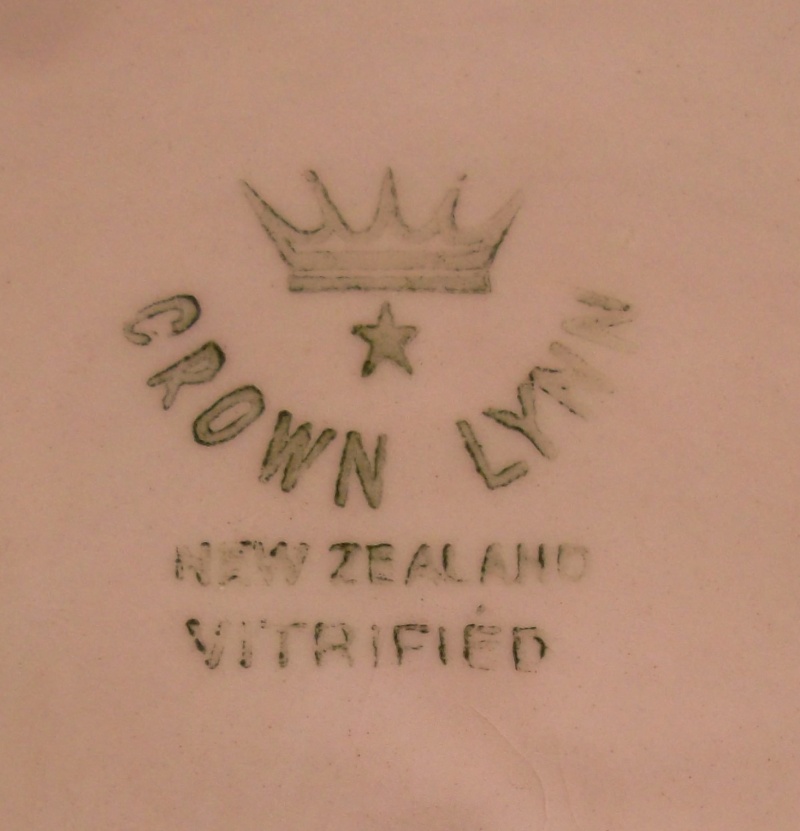 I will go along with that Janice, you just need one more to agree for it to get into the Gallery.
Even though it's not a Navy plate .....

I was thinking Navy... then water, so I thought umm, a "dish like plate" would stop spills whilst at sea! ( whilst the ship was rocking back & forth) LOL

This one is Navy

I picked this up at Tikipunga market yesterday.
It may be what you-all are after. 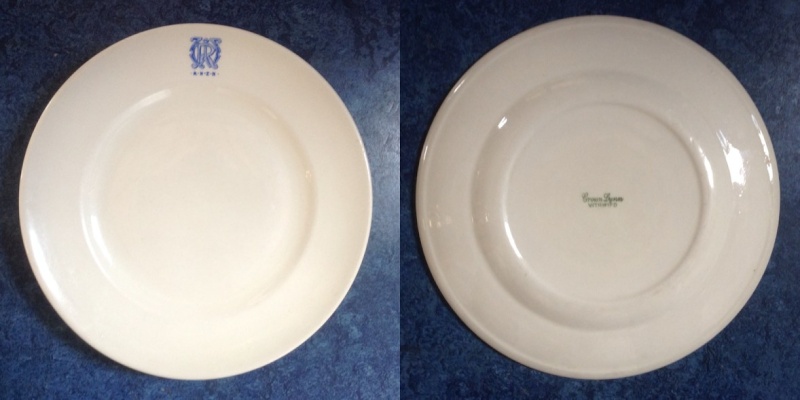 With vitrified shrinkage it would have started much bigger. And the luncheon size is often referred to as a 10 inch plate regardless of actual measure.

I found some other notes that say 808/10 Porcelain Navy Plate 10"
So what does Porcelain mean? (E/W or Vitrified?) and why have my plates not shrunk a whole inch ? LOL

I won't dare to define porcelain. I did post some links to good defs but forget where.

Suffice to say there are two factors which differentiate porcelain from earthenware, one being the addition of white clay and the other being firing at a higher temperature, but often one of those factors seems to suffice.

The word porcelain is used in two quite contrasting ways, one to describe fine often translucent pottery, another to describe the attributes of technical pottery such as electrical components.

For Crown Lynn's purposes here I think substitution for vitrified would be okay.

Generally I have found that where the same mould shape is used the vitrified product will be smaller than the E/W equivalent. From the top my plate appears to match your two but I haven't seen the bottoms of yours to be sure.

If they are the same shape and no matching sizes are available in the records to distinguish them then I can only suggest a change in clay recipe and/or firing as the reason for different sizes.

I note that my early 419 vitrified (48-55) "Navy" mug is likewise MUCH smaller than my (crown and star mark) Tatum 419 mug (5mm OD, on a mug is a big difference): as these backstamps are matches for the stamps on the differently-sized plates I think the same story applies. Therefore they could be the same shape, from the same mould, but totally different sizes.

I have also noticed that with 773/774 duos there was originally a size discrepancy between E/W and vit but the later vit demis were bigger than the early ones.

Also, to no particular point, my Navy plate is a match in diameter for my white vitrified coupe (1980s) and my Pioneer coupe luncheon plates, but BIGGER than my Fleurette luncheon plates (60s-70s).

I have quite a few vitrified plates all round that 9" size, but these were the only 2 measuring 10" diameter.

Edits :- opps
the plate/dish I have looks does not look like this one

Put it in the Gallery Janice.
I'm disappointed that they don't have the plate shapes poster on the Portage site. Now I'm wondering if the one I saw in a photo of them cataloguing the collection was lent to them and not from the collection itself. Won't know until we can visit the Museum I guess.

It is odd to see a vit plate larger than the description size.
There is a gap in dates in the 46xx gallery from 1973 to 1983.
I'd guess from its location that the 4646 is closer to the latter.

I'm still thinking mine (above) will be the 808/10, just an earlier version.
(Unless or until we find another number with a suitable description.)

I'm a bit confused here Jeremy as 255mm is the equivalent to 10 inches isn't it?
I can't find a measurement for the 4646, which should be the same, as the description says the 808/10. Please help me understand your thinking.

Ev, 250mm is often used as an approximation for 10 inches. It is actually a bit over 250 but 255 is MORE THAN 10 inches. Without rulers in hand I can be no more accurate than that.

We sometimes see the same shape with a degree of variation in size. I have noted elsewhere wrt the 419 "Navy Mug": my 1960s one is clearly bigger than my 48-55 yet both are marked 419.

The size variation in the Navy plates is over 20mm which is about 10%, whereas for the Navy mugs it is only about 5%.

In both examples the later one is the larger. Wrt the mug I suggest that the variation in size reflects a change in the process and/or composition of the clay body rather than a deliberate upsizing. Less convinced about the plates, but, as I've said, unless/until another number appears for the earlier plate I will assume that it too is an 808/10. Remember, it does have the added provenance of a Navy monogram which fits the item description.

Ev.. I need to remove the image 808/10 and replace with the Written description - have you got that image?
I also need to go out (running late as per usual) I can fix it later :O) - sorry this week is hectic !

So is yours less than that Janice?

Sorry Ev and Jan, as I am probably away from home until the New Year I will not be able to add any new info here.

If I understand correctly the issue at the moment is that the height of "37mm" as stated at Portage (one and a half inches) would indicate a "dish" or (soup?) bowl rather than merely a wide rimmed plate. Although I did glance at my plate yesterday as I was attempting to tidy up (failed!) the height simply did not register.

This bowl ticks all the boxes. 10  inches wide 37mm high and RNZN. 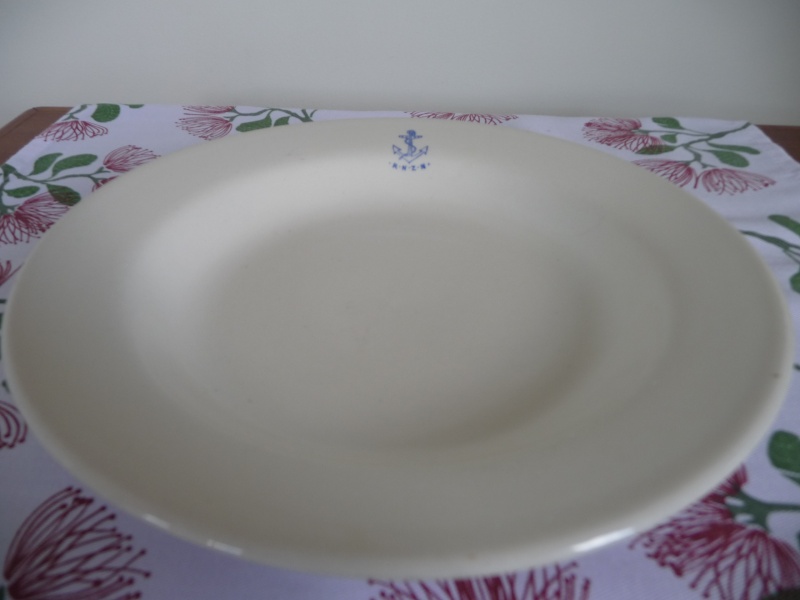 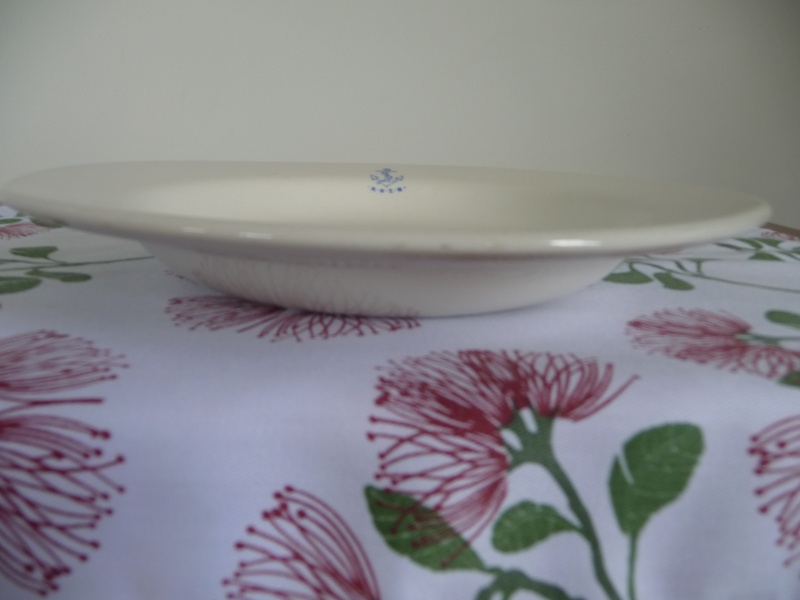 Thanks I will go with that sid