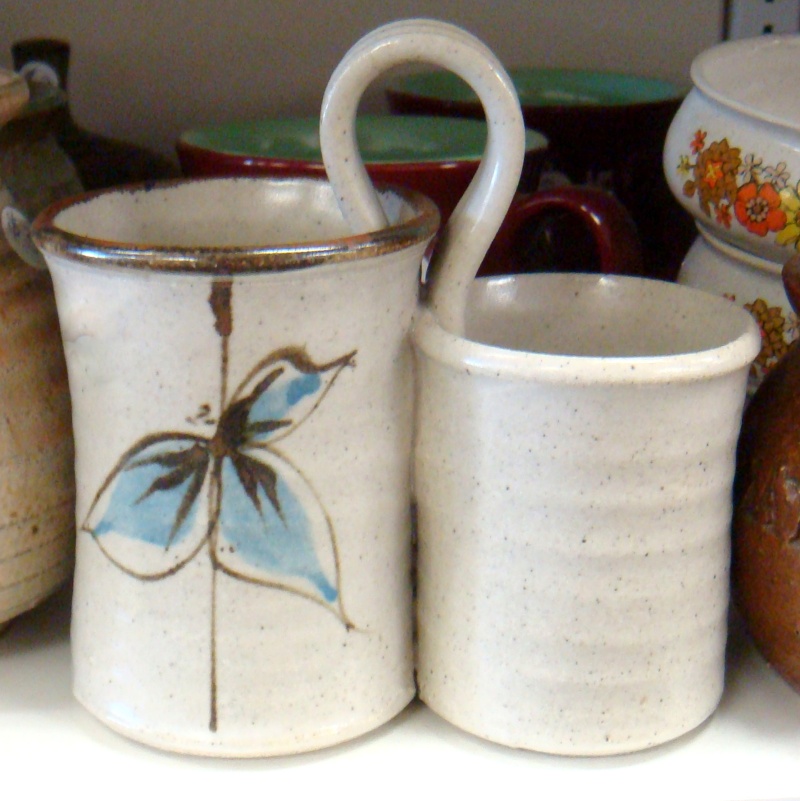 I found this wee wet & dry spoons pot yesterday (I assume that's what it is), and thought the decoration was similar to Royce McGlashens early pieces.

I know it is a sticker, and not a mark, but I seem to remember a while ago, someone posted a pot with no mark, and I remember thinking at the time that it was similar to the pattern Royce used, so it may help someone sometime down the line perhaps.

Country Touch Pottery was my pottery in Mapua from1985 till 1990 and it was up Seaton Valley Road. Then for a short period I traded out of Founders Park and the Nelson Market before moving to England for 10 years where due to varying circumstances I took up garden design and developed my own business. The pot photoed is one of mine and was probably fired in a gas tophat kiln.Probably a Macs Mud body. It was one of a line we developed in the mid to late 80s as the fashion for earth colours died.
My brother and I started potting in the Hokianga in the 70s making our first kiln from a design from the Kamo Brick works. We were mostly self taught from books (Leach and NZ potters) and friends such as Jack Davidson (Jack Pots), Jerry Greenwood and then winter tuition with Yvonne Rust. Later we moved to Kerikeri and potted under the name The Potting Shed. Also sold through Peter Sinclair shops in Auckland. I then moved down to Nelson and with the large number of potters in the area we had a collegial work ethic and got together to compare designs, ideas and techniques. I worked in a studio before starting on my own as Ruby Bay Pottery where I trained David Walker (Akaroa) and Chris Conroy (Nelson) from scratch. We were firing a 2 cubic metre diesel trolley kiln and sold pots to most of the South Island centres and Wellington comprising stoneware planters with inbuilt sausers, domestic ware and ornamental pots. We developed our own brush decoration which we enjoyed. Then as I said earlier, I moved to Mapua and fired in a top hat gas kiln. I returned to NZ and Nelson in 2003 and continued with my gardening business doing design and maintenence till my recent retirement and am now touring in a campervan in the North Island.

Thanks so much for joining the site and adding your interesting pottery history Don.
You have added many names that make up our colourful pottery background.
Touring in a campervan around the North Island sounds just wonderful.  Cheers Ev

Yes, thank you Don for that great insight into your potting. I live in Dawson Road, which you probably know is off Seaton Valley Road. I am curious as to where you were on the road, e.g. what number / rural number, as I suspect our boundry is very close to where you were.

Don thank you for this interesting summary. Did you use a potters mark or just stickers?

To mumof1
Our house and pottery studio were about 1km from the State Highway between two orchards, one of which belonged to the Tucker family. Our drive was parallel to their house drive. We did not have any house numbers in the 1980s but looking at looking at google maps it looks as though it would now be 107 and 107a. There was another house sharing the same drive with us which looks like it would be 109.

To martyr
When I first started potting I wrote a capital A in iron oxide on the base. I think I used RB for Ruby Bay Pottery for the short time I was in that studio and then changed to stickers for Country Touch Pottery when moving to Mapua.

Ha ha! I knew it would be close, we share our boundary with 109, where the large stand of trees are on the ridge. what a great piece of very local history - thank you!

Hi Don,
I was sent these photos and asked if the mark was yours.
Please let me know either way.
Many thanks Ev. 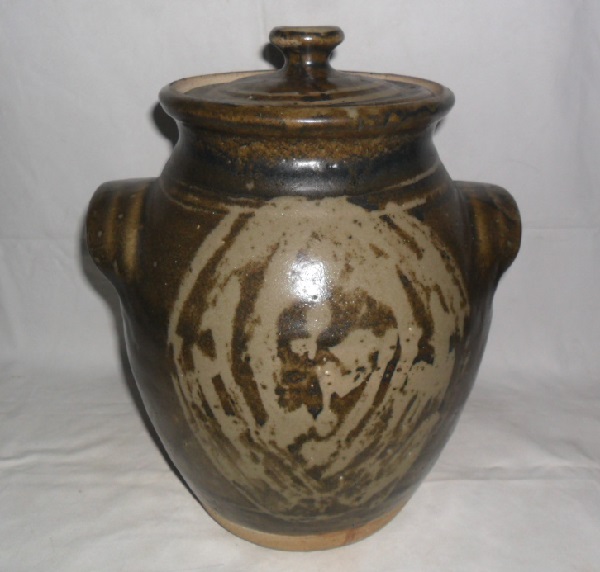 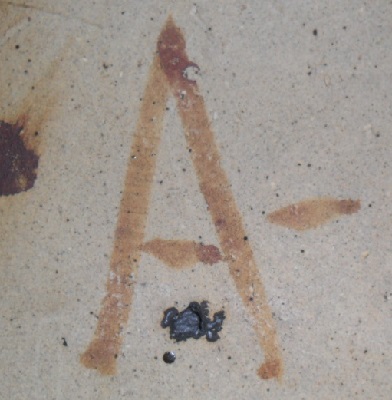 Also Don could you confirm if this was made by Jerry Greenwood please?
Many thanks ..... 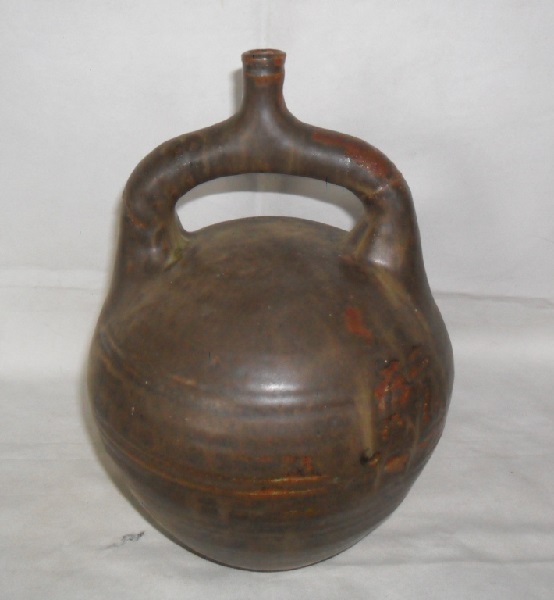 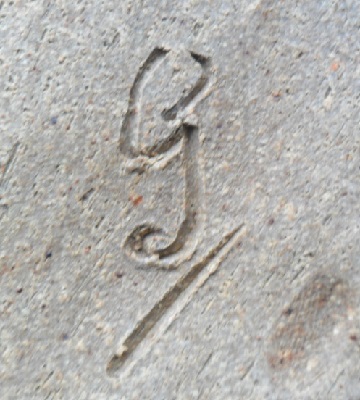 A gorgeous platter, with handles, iron oxide in the decoration: 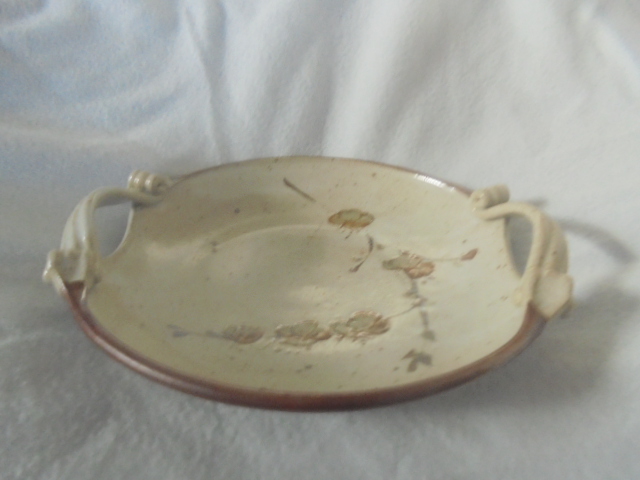 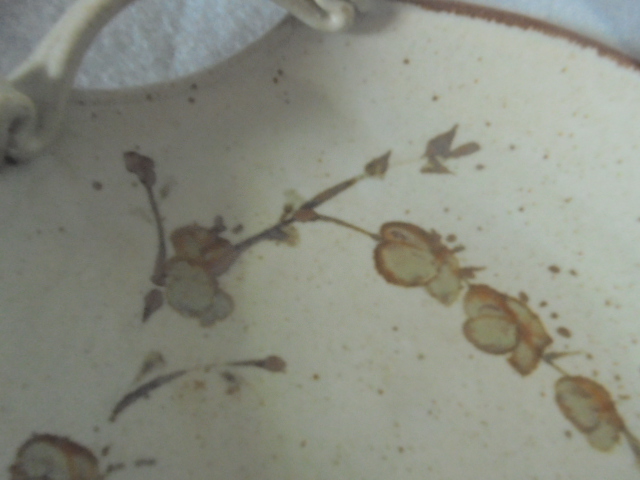 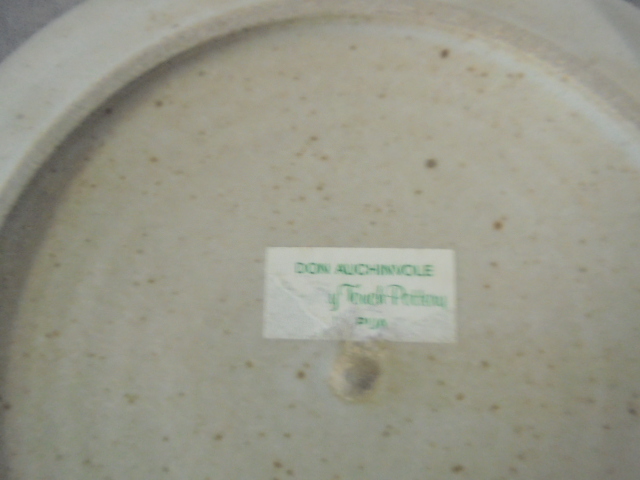