» LITTLE JUG WITH STOPPER - marked 'j' to base

OC Stephens mug. One of a pair. 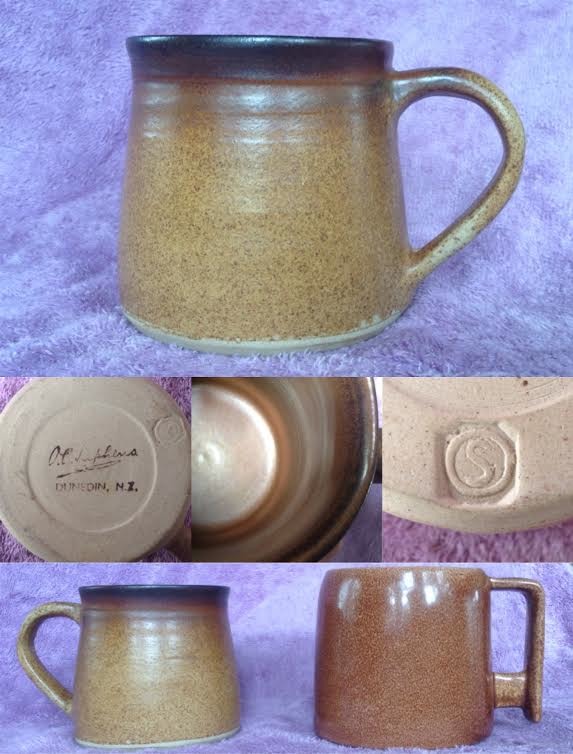 A combination of factors lead me to believe this is hand-potted: there are variations in size between two mugs, they have work marks, there is thickening at the junction of base and sides, there is lack of indentation on the inside of the handle joins, and they have a potters mark not seen on Stephens' slipware.

I have shown the mark from the other mug (centre right) as it is the more clearly formed. This Stephens mark does not match the "S" marks in the mystery marks section of the gallery.

Thankfully the tm seller dropped the price on offer.

Later ...
I see an expired tm listing has a later Stephens mark with the "S" joining the surrounding circle to make what looks like a yin-yang symbol.

Hi Jeremy, the later addition in your reply sounds like the O C Stephens studio pottery mark in the Potter's Marks book. I describe it as a 'skinny' S. Just found it on the nzpotter site http://www.nzpotters.com/PottersMarks/PottersMark_Image.cfm?potterID=528

Yes I'm aware that he made pottery by hand originally, but I've only seen that mark on the nzpotters site. How odd that the mug with both stamps has a wide footring?
Could you please add a photo to show how the handle is attached and finished at the bottom please. These are very tell tale signs of studio pottery and each potter has their own way of doing this.

All interesting to say the least!

Ev, you'll see from the white spot (right photo front mug) that there is some damage to one handle.

There are signs of distress, or failure, at the top end too (not shown), like a crack but looks more like a flaw to me.

You can see the two are the same shape but not a perfect match.

My mistake. What I read was:
"This hand thrown bowl is a late example by Dunedin studio potter O.C. Stephens (born in 1896). He only made stoneware between his retirement in 1961 and his death in 1980. "

Actually I think it means the same thing.

The item in this auction has a different "S" mark. I think mine will be much earlier.

The catalog refers to a copper glaze. Such a bowl sold recently on tm.

I have no idea of the date for these. Any help is welcome.

Thanks Jeremy, the photos don't help me really, but one day I would like to see them or one in real life.
I will add your S mark to the Gallery ..... thanks for that.

On the upper side of (bottom end of) one handle it is a bit rounded where it connects but on the other is quite sharply acute, which you don't really get on slipware.

One tapers straight to the base, the other has a slight flat between handle and base.

I added a little more to previous post that you may not have seen.

The hand-potted bowl I linked to above with the other S mark also has the wide shallow footring: http://www.trademe.co.nz/Pottery-glass/Porcelain-pottery/Other-NZ-manufacturers/auction-852543240.htm

I suspect it's just what he did. I notice on one of my mugs there are concentric semicircular scratch/grit marks in the area within the footring as though it has been worked/machined while green. 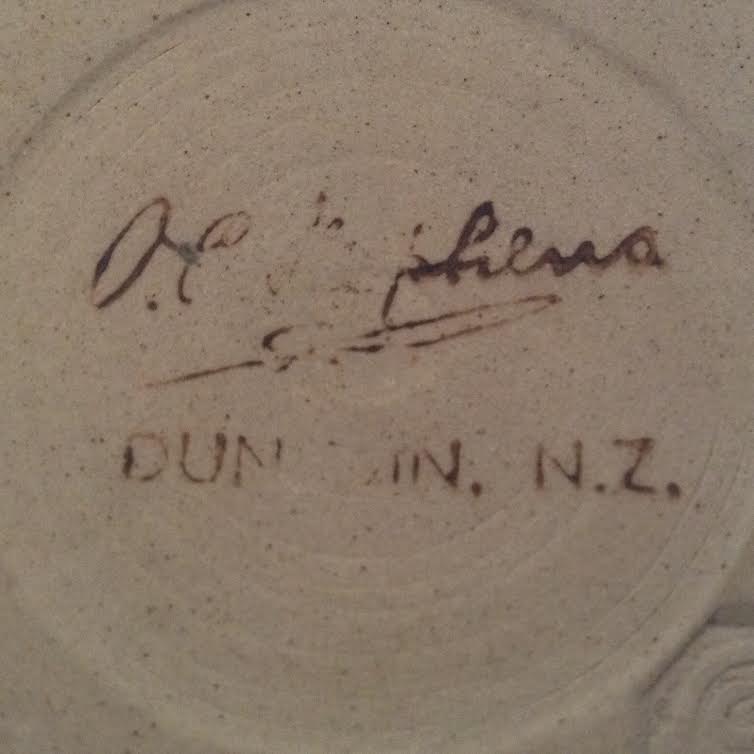 Jeremy just came by and showed me this mug and it is definitely hand potted.
Thanks Jeremy as I may never see another.

Ev wrote:Jeremy just came by and showed me this mug and it is definitely hand potted.
Thanks Jeremy as I may never see another.

I was just about to take my leave of potter Rick Urban at his Warkworth shop Ofhandandheart this morning when he produced this gem and I had to take out my wallet once more.

(The overcast sky was just too bright for decent photos today.)
(I'll do better another day.)

I can't quite see his stamp Jeremy. Is it the same as that on the other mug?
Well done you!!

Ev, the impressed mark is very soft. It is the same as the other one.
I just put the photo in to show that it was there.

As for well done me, I visited Rick specifically to buy an older Ross Mitchell-Anyon mug, to survey Rick's own work, and see what else he had that I hadn't noted on his web page. As with gallery exhibitions, I find large quantities daunting and cease to take in new information very quickly, so it was Rick I must thank for specifically bringing the OCS to my attention.

I'll try and make some better photos another day.