26cmD  Rim shape dinner plate..have we got this pattern yet?
I had a look thru the gallery but may have missed it.

Note: This is a Rim shape plate thats a little different.. it has sharper edges & is a couple of mm taller than my rim shape Willow dinnerset....?? 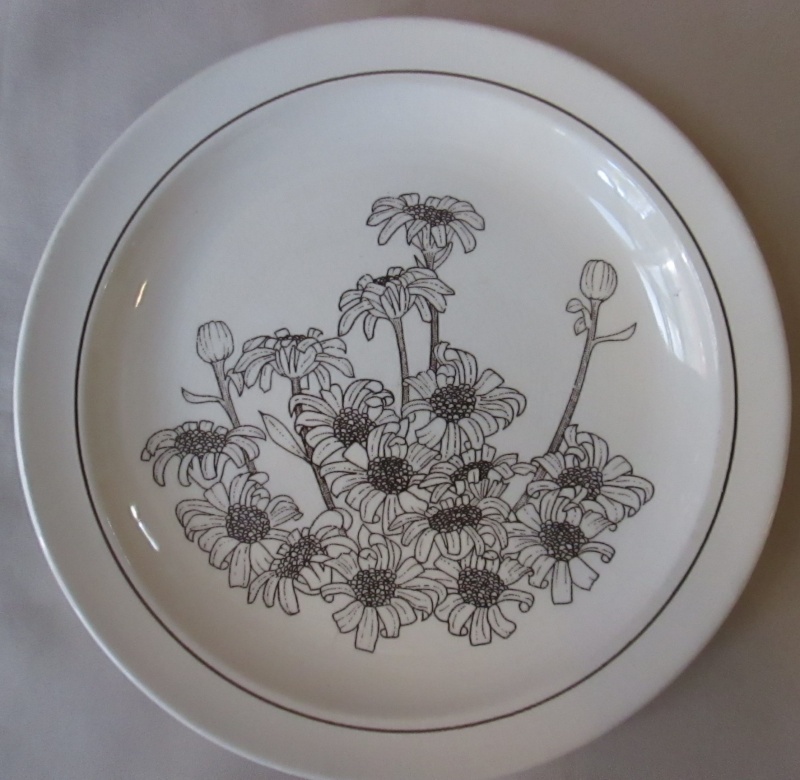 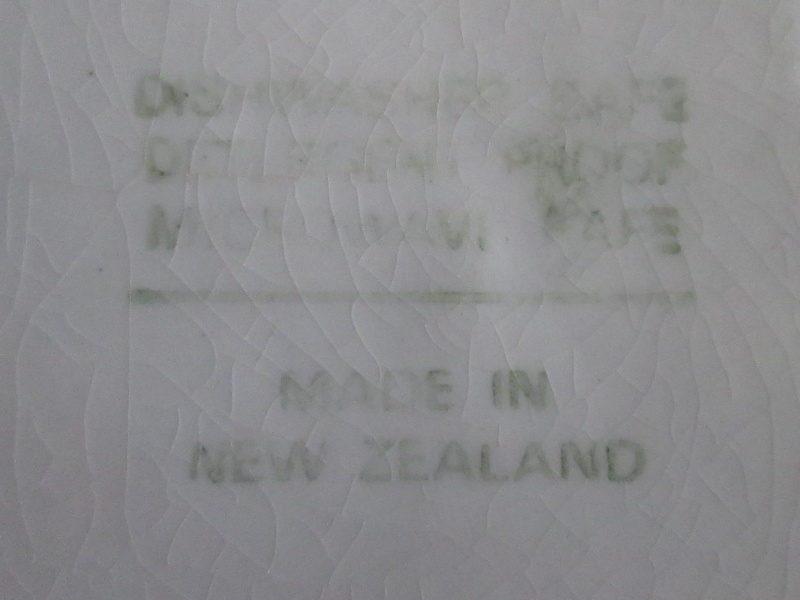 ummm... this looks so familiar, I thought at first Sorrento but no, then hampton, not that either....
I am trying to imagine it in colour ? maybe its a outline version of something..
I can put it in the "no-names" gallery for now.
Janice

This is in the Portage Museum archives. I'm a bit busy atm, but will come back and find it later. I have wasted so much time downloading Windows10 and getting some order back onto my lappy and now I'm all behind.

Not sure now if this is the same as it doesn't have enough flowers .... perhaps this is a side plate ...?  Spring Garden d404

I have this photo in my files... they are dishes - still not helping to confirm the name of the dinner plate !
The pattern book usually shows the whole pattern though?
Photo amended ( Janice) 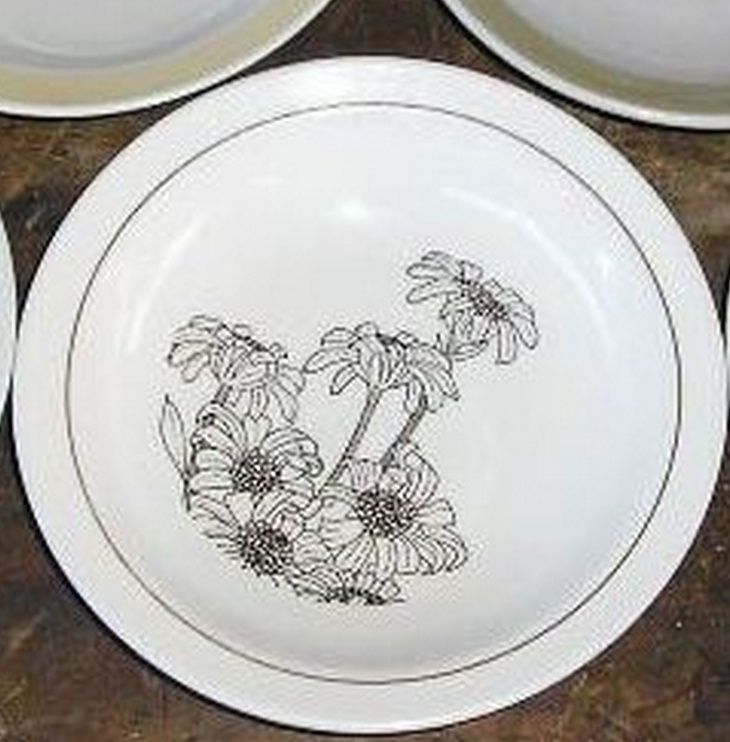 The thing that I find most exciting about all this research is that we are able to get a clear handle on which patterns are designed in house and which are not. Broadly speaking the Murray prints are in house and the transfers are imported but it is so wonderful to see them in the design books. Happy!!!!!!!!!!!!!

Malkin and Murray Curvex patterns were designed in house and the production plates also produced in house.

Dave and Mark pushed the boundary's in terms of design with what was the cheapest and simplest of production techniques.
They had to develop designs that could be cranked out for the low end market along with those that had more "style" for the Crown Lynn back-stamp. I will try and find and post some examples.

The English manufacturers of the machines were amazed at the rate of production the engineers had achieved with good old Kiwi #8 wire ideas.

Did you know that Pine and Palm Springs were produced on the Malkin?

As to transfers there are several answers. Those that were produced by lithograph, multi colour, like Sapphire, Autumn Splendor, came from overseas. Usually English, Johnston Matthey, but also America, Commercial Decal. The problem was that Crown Lynn was a relatively small customer and so couldn't have their own designs produced nor obtain exclusivity. This meant either taking what were called Stock Patterns that were also sold to other dinnerware manufactures around the world, or in some cases tying in with an exclusive pattern being produced for a company that didn't export to New Zealand.

As it was not practical to print lithograph using inks for ceramics in NZ Sir Tom started the in house production of silk screen transfers. This solved the problem of small production runs but limited the Design Studio in terms of the number of colours in a design , and most important, the density of the colour, ie no shading.

Again Dave and Mark really pushed the boundary's particularity with the designs for the Forma shape. Again I will try and find examples.

janpots wrote:
I have this photo in my files...

I really thought that there was another that matched Kat's design.

Dale, your information is mind blowing and if you have trouble loading photos just email them to the site on newzealandpottery@gmail.com and I will load them for you.
Most of the Crown Lynn records of the patterns show which machine was used e.g.
Countryside Brown - Murray Curvex
Riverside Brown - Murray Print
Glendale - Dekram

Dale thank you very much for the info about Crown Lynn you are putting on this site. It is so wonderful to hear from people who worked there.
VERY much appreciated.

This is the same pattern Spring Garden d404.
A dinner plate and a side plate.
We only have the one record and it has orange and brown flowers on the cups.
Mon found two cups at the Hamilton Market.

Belinda has coloured cups with green flowers and also with brown flowers, but I can only find this pattern in the records I have with the orange flowers. 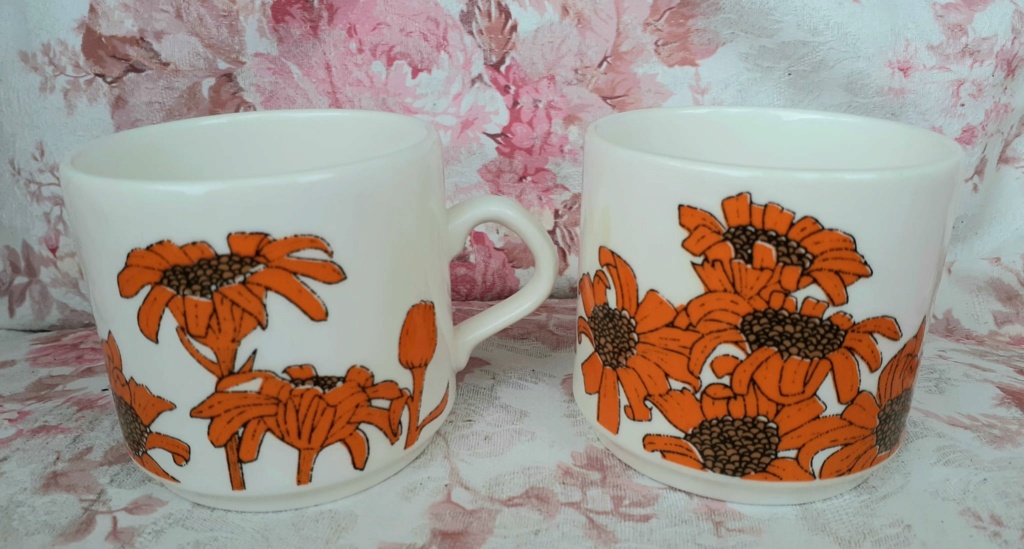