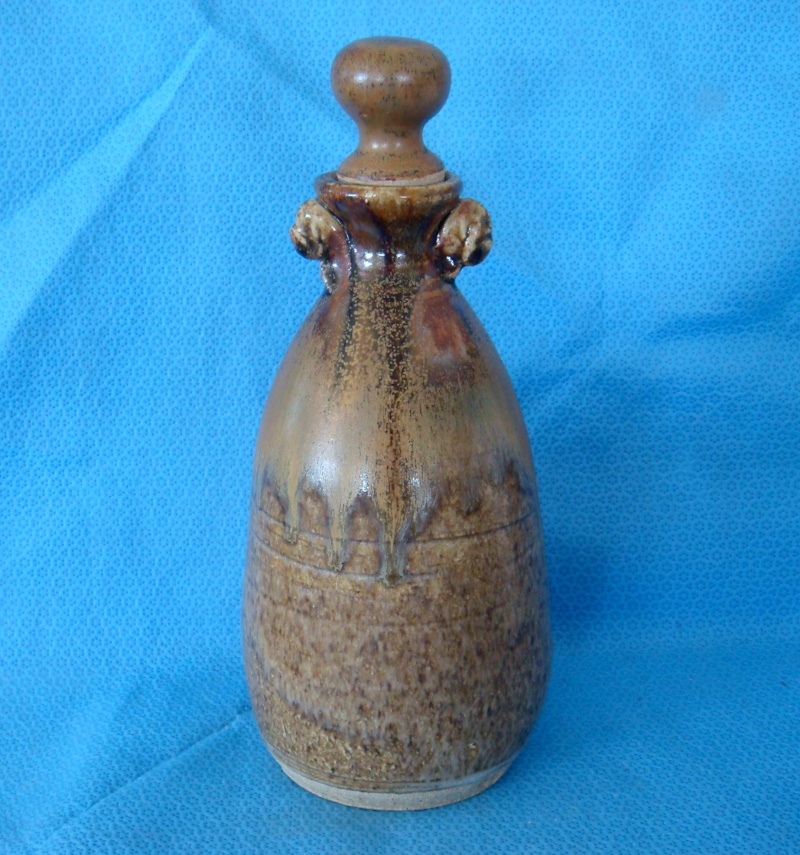 I had to buy this, the patterning in the glaze is amazing 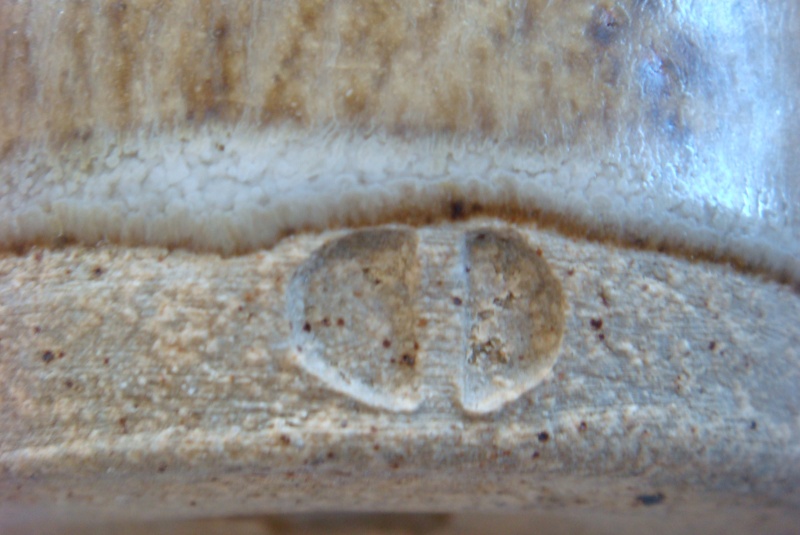 I don't recognise this mark though, any ideas please?

That's a mystery mark I've been chasing for years. My guess is a female potter from Auckland who worked for many years, but I don't know for sure. Ev may even know them but not recognize the mark.

Ev, do you think there is a chance this might be Janet Smith's early mark?

Hi T&C there is every chance this could be Janet's mark, but I don't know either way.

The reason I think it may be Janet Smith is this:

I bought a stoneware vase some years ago that has a very similar mark - I call it the screw-head mark - for which I have been trying to find an attribution ever since. In New Zealand 20th century studio pottery glaze and decoration terms it is quite unusual. 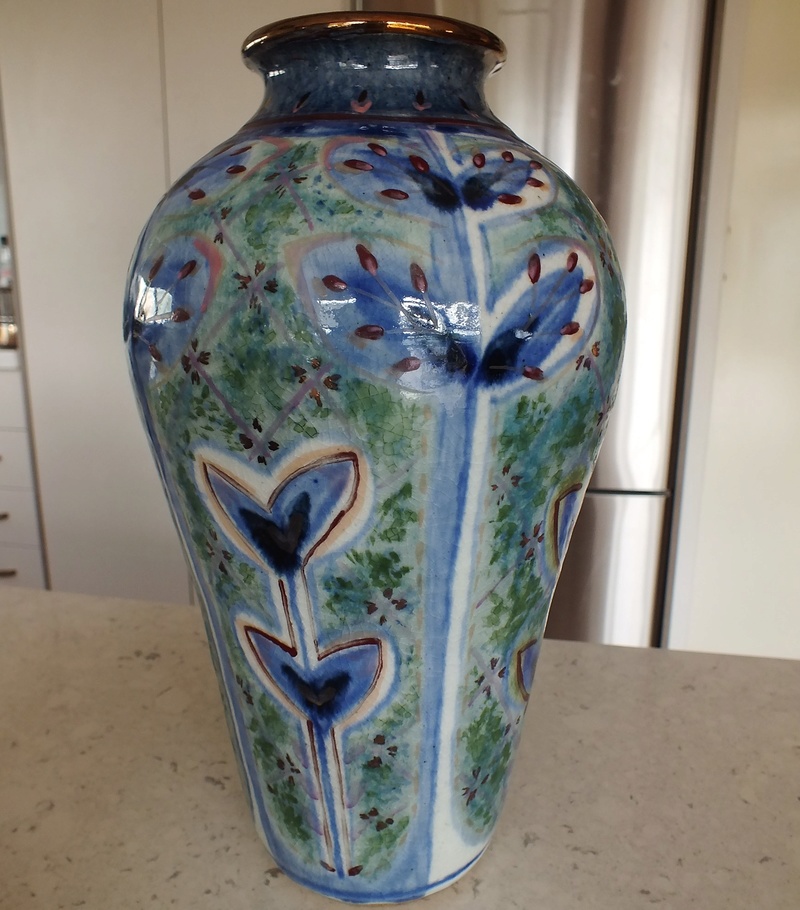 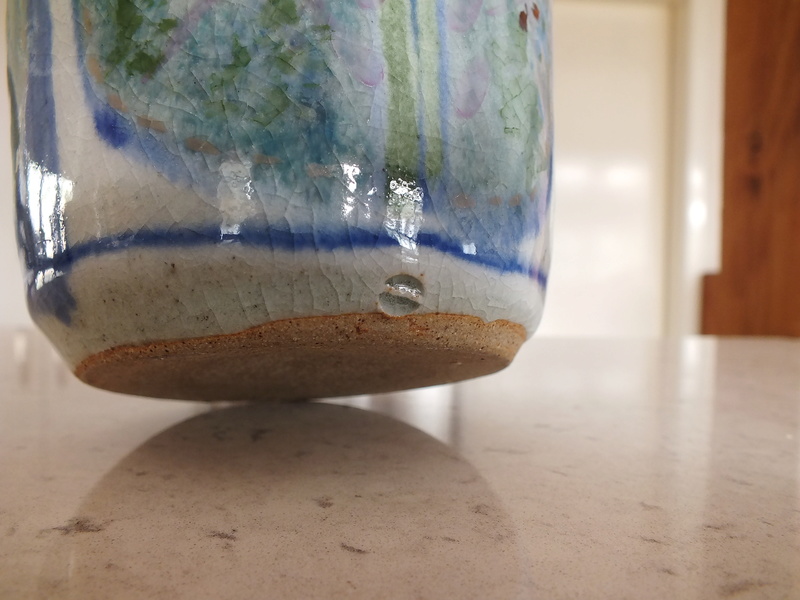 The vase is an East Asian upright form known as a Mei-ping, which has a high shoulder and narrow mouth. It has been fired, I guess, a number of times to achieve the final decorative effect. Probably bisque fired first, it was then decorated in under-glazed cobalt blue and green, sealed under a transparent celadon crackle. Then lower fired green and puce enamels were layered over the top, and a final firing seems to have been done to add the gilding or coppering highlights and rim. It is particularly eye-catching because the decoration has been done in a modernist painterly style reminiscent of (in my opinion) Marc Chagall.

So who had the skills and inclination to go to these unusual lengths to decorate a New Zealand stoneware studio vase? Evidently quite an eminent potter ran my reasoning.

However, I wasn't able to find another one done in this style, despite having seen the screw-head mark occasionally. Until recently... 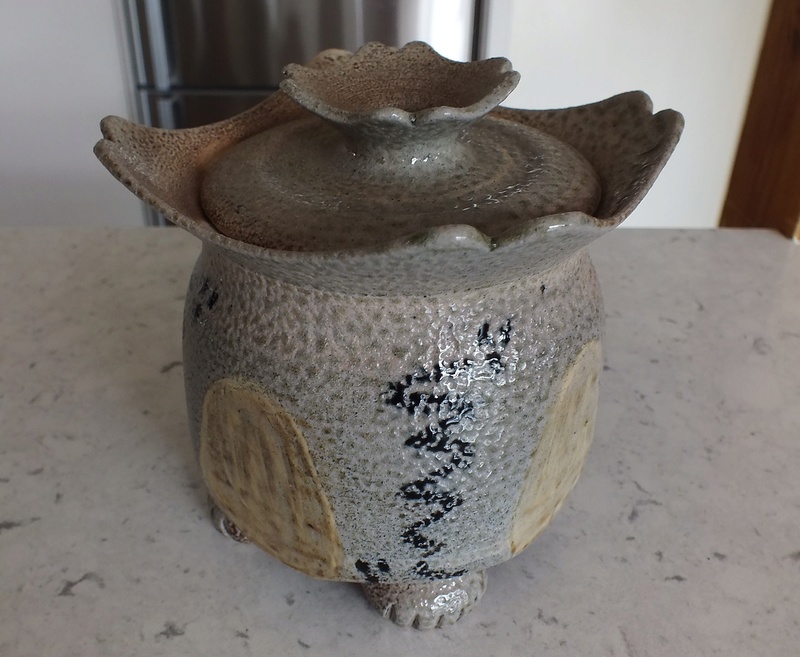 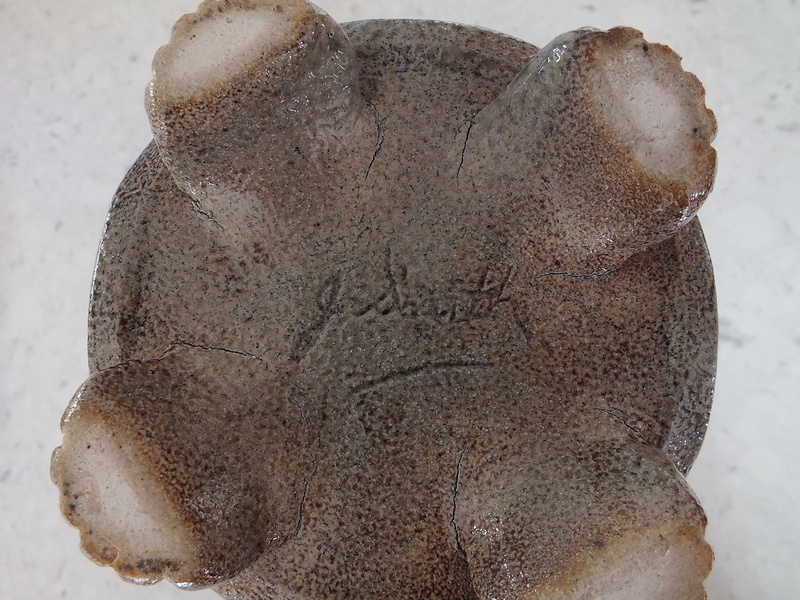 This didn't allow me to connect the two pots above.

But then, a few weeks ago, I found another one of these pagoda ginger jars with clawed bun feet but unmarked. Obviously it was made by Janet Smith, and excitingly for me, decorated in a very similar distinctive manner to the first vase I have. The decoration is again under-glazed cobalt blue under a delicate transparent celadon crackle going towards what the Chinese call 'peach blossom', with over-glazed low-fired gold and puce abstract flourishes. 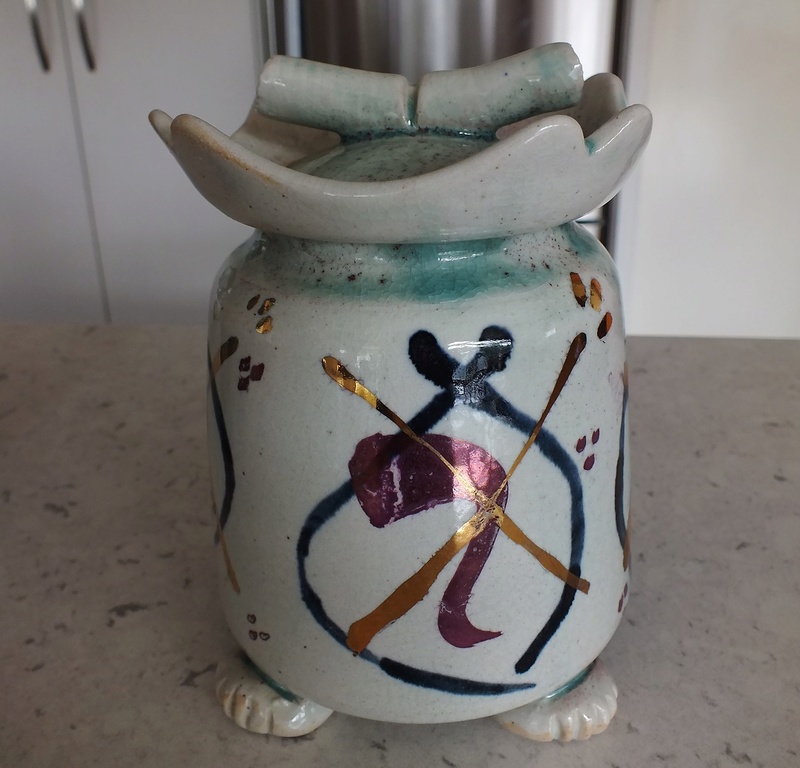 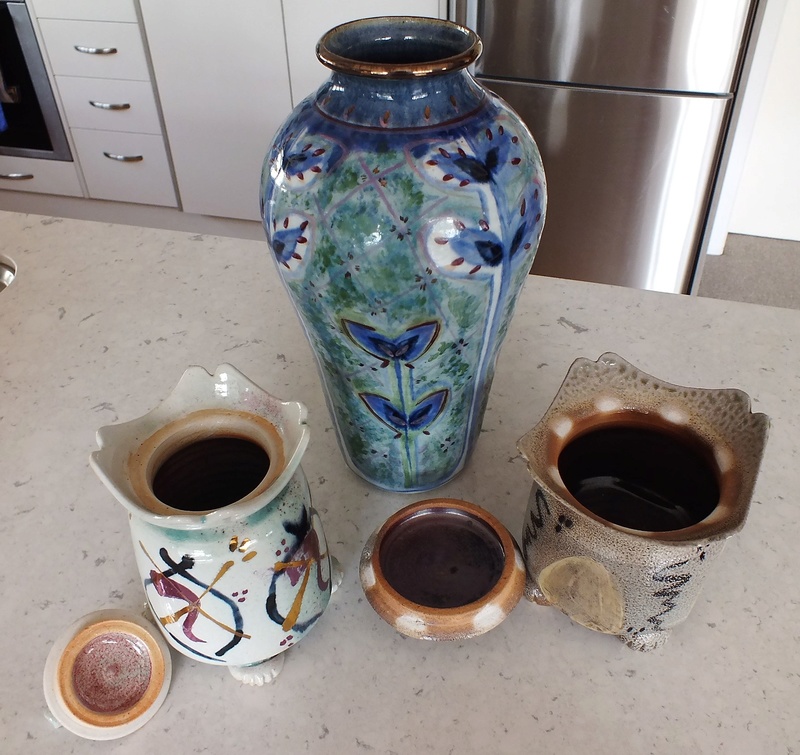 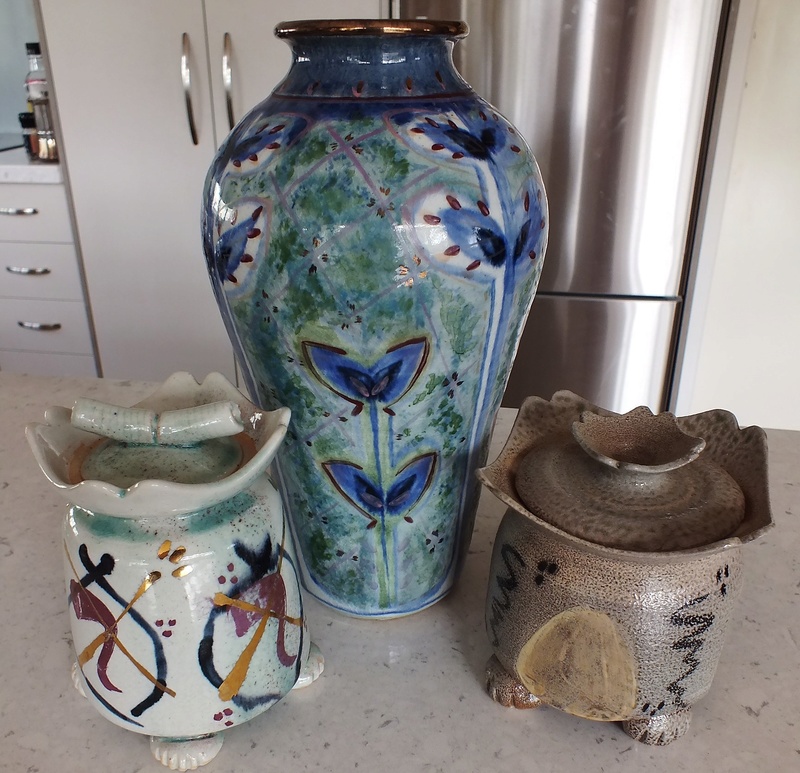 I'm not sure this is quite enough to say definitively that this mark is Janet Smith's, but it does suggest it is. She is one of the most eminent potters working in the Waikato today. She's been the regional delegate to the NZ Potter's Society and has exhibited with the likes of Barry Brickell and co.

So is this mark her's?

That's a great post T & C and I think you have done a jolly good sleuthing job here. I think it would be best to contact her to get her nod.

I have already tried to contact Janet, she appears to have changed her e-mail several times, but I think I have found the correct one now, and am awaiting a reply.

Hi Anne,
It will be interesting to see what she says. Hope we get a reply. Thanks.

Another vase by the screw-top potter - Janet Smith?

Not sure, but the same mark and squiggly deco makes me think its a possibility.

Here is the reply from Janet:
If the signature on the bottom of the pot is J Smith or GJ Smith it is mine
I cannot get the images of the work, if you want to send it by email I may be able to
recognize the work
Cheers Janet
Can someone send her photos of the mark and works perhaps? I will remove her e-mail address once someone tells me they have sent an e-mail so it is not public. oakford@xtra.co.nz

Perhaps just send Janet a link to this topic?
Though your first two photos have dropped off and need replacing.

I already sent her the link, which is why she says she can't get the images, I was hoping that the group photo and the mark would help. Either send them to me via pm to pass on, or to her directly. Will look for the original photos.

According to an Emily Myers who posted this mark on PIninterest it is from The Weathered Nest which sounds like an English pottery to me. Join up with Pininterest as looking for N.Z. studio Pottery. Wonderful posts come up although many have nothing to do with pottery here!

Further to my previous post I have seen several pots with this mark in opp. shops in the Wgtn. region over the years. All of vg. quality but not like any of those pictured.

The name Harley Gamble has been put forward for this mark

On Facebook Jimmy Ballard has stated that this is the mark of Harley Gamble, but as there is no info out there about this potter I will add that identification is pending more info.

Look under Pots for the 80's

I just want to add what the link says, in case it disappears as links seem to do.

An exhibition catalogue during 1980 - 1984 includes Harley Gamble along with Nicholas Brandon in Wellington.