This afternoon I spent an enjoyable hour talking with Phyllis Shirley Atkins, one of the Waikato's early craft potters. This post is to record that visit and put a wee spot light on a potter who deserves to be better represented in the record. She is now in her mid 80s and uses a zimmer but is humorous, bright and loves discussing pottery.

I had been meaning to track Mrs Atkins down for at least two years, since finding out that the mark PSA is hers. Serendipity intervened two weeks ago when her granddaughter Elisha appeared at our door to pick up a Trademe auction of two pots. It is through her that I have been able to visit the flat Phyllis shares with her husband in Te Awamutu. 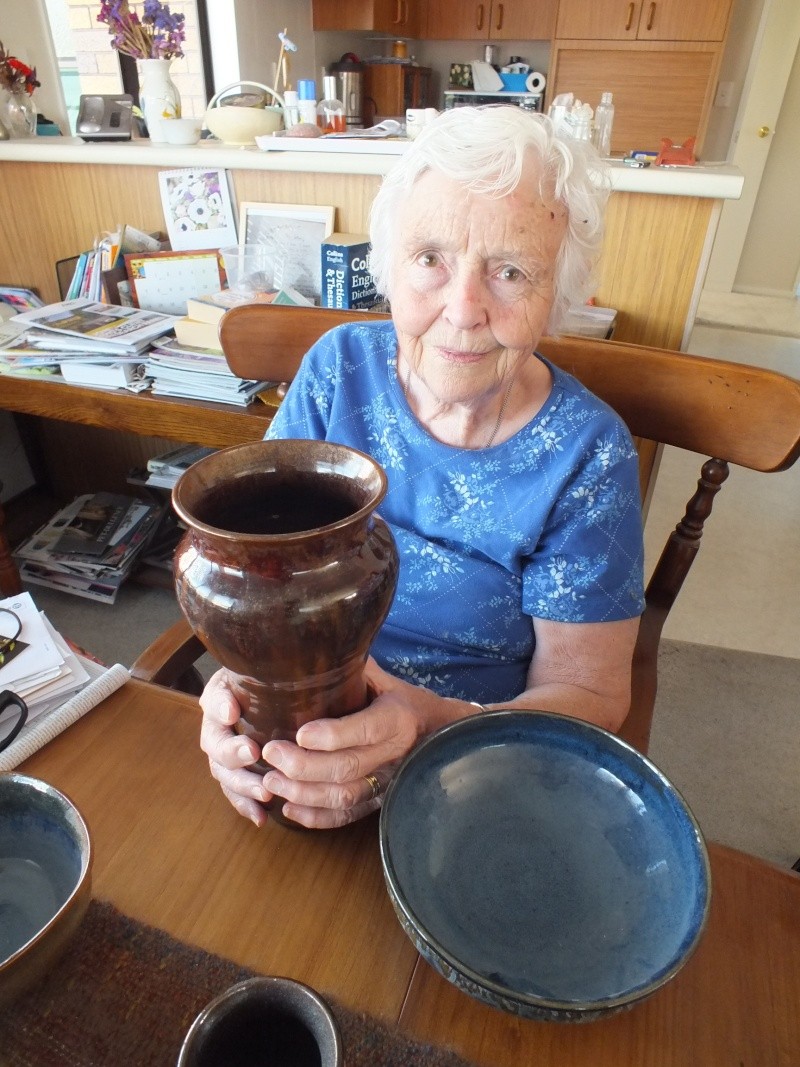 Phyllis Atkins fits within the earlier tradition of New Zealand's first generation of 'lady potters' rather than that of her contemporaries in the post-war studio-pottery movement. Her peers are better thought of as Olive Jones, Elizabeth Matheson, Briar Gardiner, Elizabeth Lissaman and June Clark (the latter two also Waikato lady potters). Her glazes, volume of output and her remarkable isolation from the rest of the New Zealand pottery movement on a remote farm at Oparau near the rugged Waikato coast south of Raglan give her work a very familiar feel for anyone who has collected the pots of Olive Jones or Elizabeth Lissaman.

Phyllis developed many of her own glazes though trial and error. For example, the browns may contain a mix of native wood ash and estuary mud. 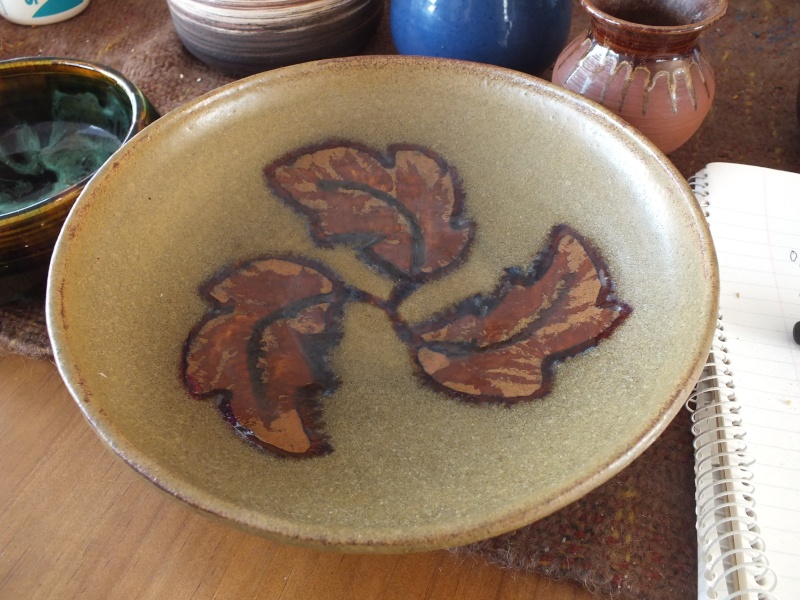 Her kiln was a small New Zealand made electric kiln which she fired to between 1100 and 1150 degrees meaning the vessels are strong, resilient stoneware. She often fired her pots more than twice if not satisfied with initial results. This can result in some unusual thick, lustrous glazes. A characteristic of her pots is that you will seldom find one with much of the crazing that can afflict the work of some of the earlier lady potters. This seems to be the result of a happy marriage between the local clays from around the farm at Oparau and nearby at Hauturu and the glazes she tweaked and developed. Phyllis also experimented with using Nelson clay but found the local stuff to be just as good if not better. It ranges between reddish and buff in colour if you are lucky enough to find a pot.

Phyllis started potting in the early 1960s, which is a wee bit later than I had thought. Her only professional contact with other potters seems to have been a brief course of night classes at Hamilton East School to learn the basics. After this, it is fair to say that Phyllis believed she had found her vocation. She was assisted by her husband who kept the kiln going, jerry-rigged grinding equipment from old sewing machines and hand-turned knife-sharpening stones and found new deposits of clay for Phyllis to test. 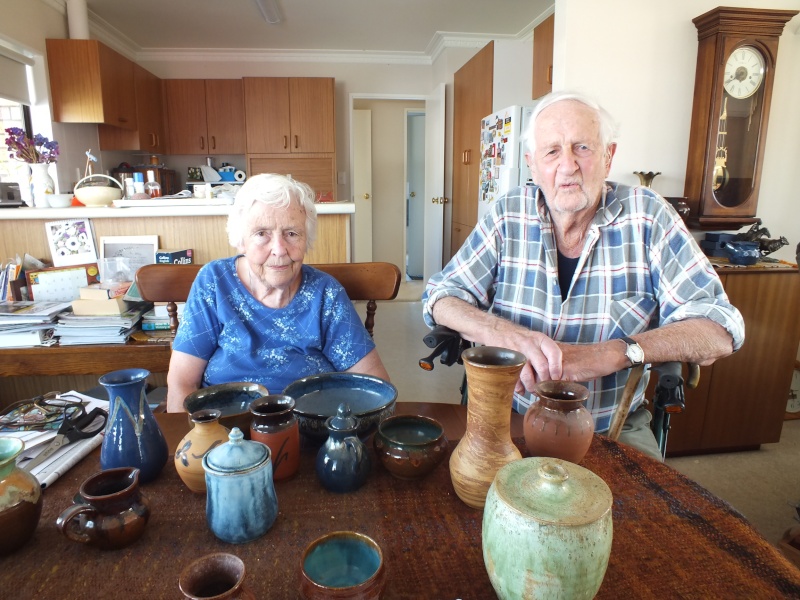 The confusion concerning how to decipher her numbering system arises because there were actually two different ones. The first from the early 1960s starts at one and runs consecutively into the mid thousands. Sometime in the mid 1970s Phyllis found this unsatisfactory and started a numbering code with the first two digits representing the year, the second two the firing number.

The kiln was small with two levels - like Elizabeth Lissaman's first one in Marlborough in the 1930s. One level would usually be stacked with about three medium sized vessels and the other shelf would have about half a dozen smaller objects on it, so each firing seldom included more than 10 pots. Firings were done as and when required.

Phyllis says her work always sold very readily even though she was well aware that her glaze colours and forms were out of fashion in the 1960s to 1980s - the height of the era of the brown and grey toned studio pottery movement. She sold at fairs around the southern Waikato and was even called upon to dispatch consignments to meet export orders from Australia on several occasions! The following picture is of an order for pin dishes she did for Te Awamutu's anniversary one year. Te Awamutu is known as New Zealand's 'Rosetown.' 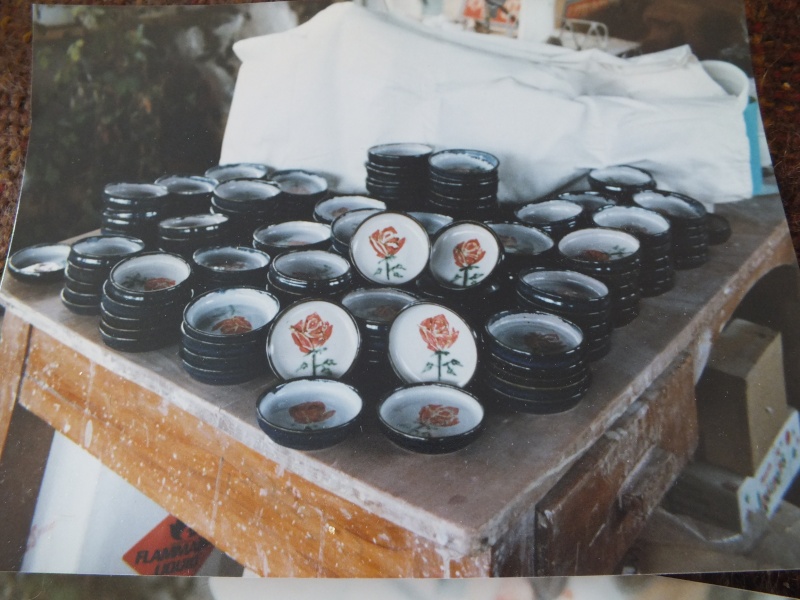 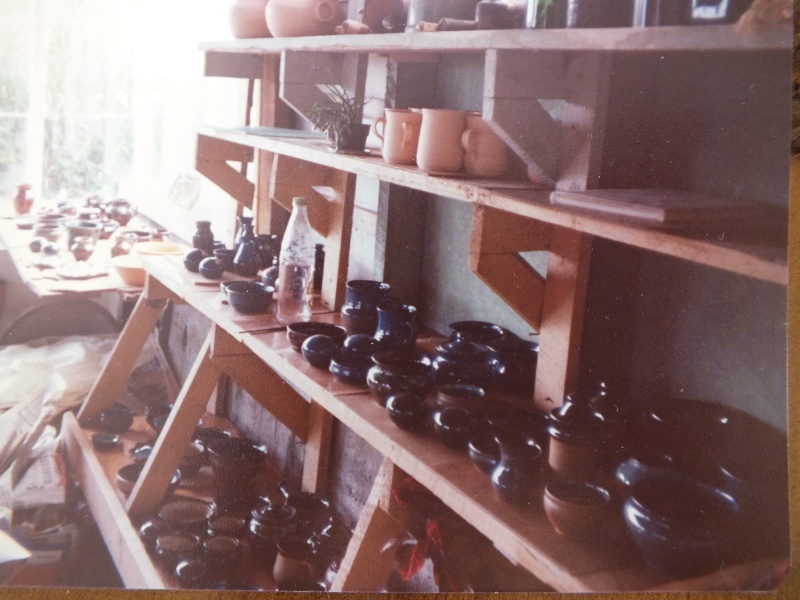 Phyllis Atkins stopped potting in the mid 1980s, following a trip to Europe.

She had a full studio operation and left a significant number of very well potted and glazed objects that can sometimes be found in op shops - if you are lucky enough to elbow out a member of Phyllis' family for whom her pots have quite understandably become objects of considerable desire.

Last edited by teaandcoffee on Tue 8 Mar - 15:31; edited 11 times in total (Reason for editing : Getting the most important things wrong)

This is marvellous pottery history teaandcoffee and thank you so much for sharing it so wonderfully with us. I will correct the spelling on the other topic when I get a moment.

Ev - my mistake with the names. I have corrected the post now thanks.

Some pictures of Phyllis' work: 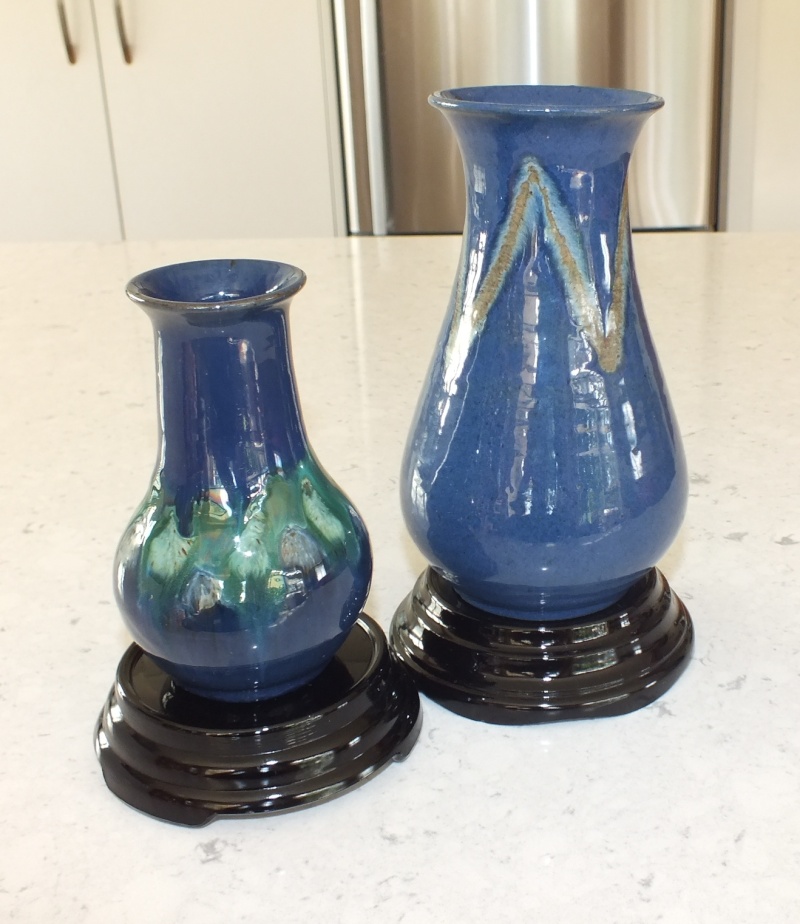 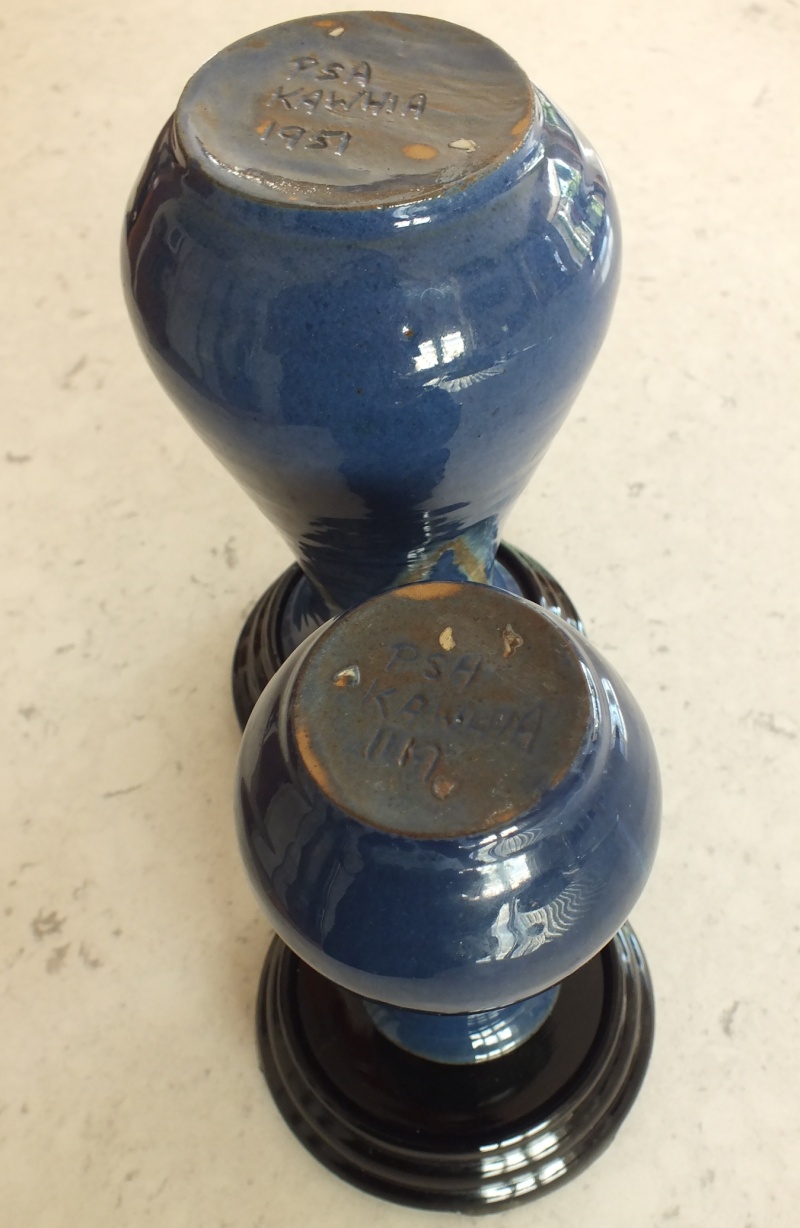 These vases are 1960s pieces going by the relatively early numbers. 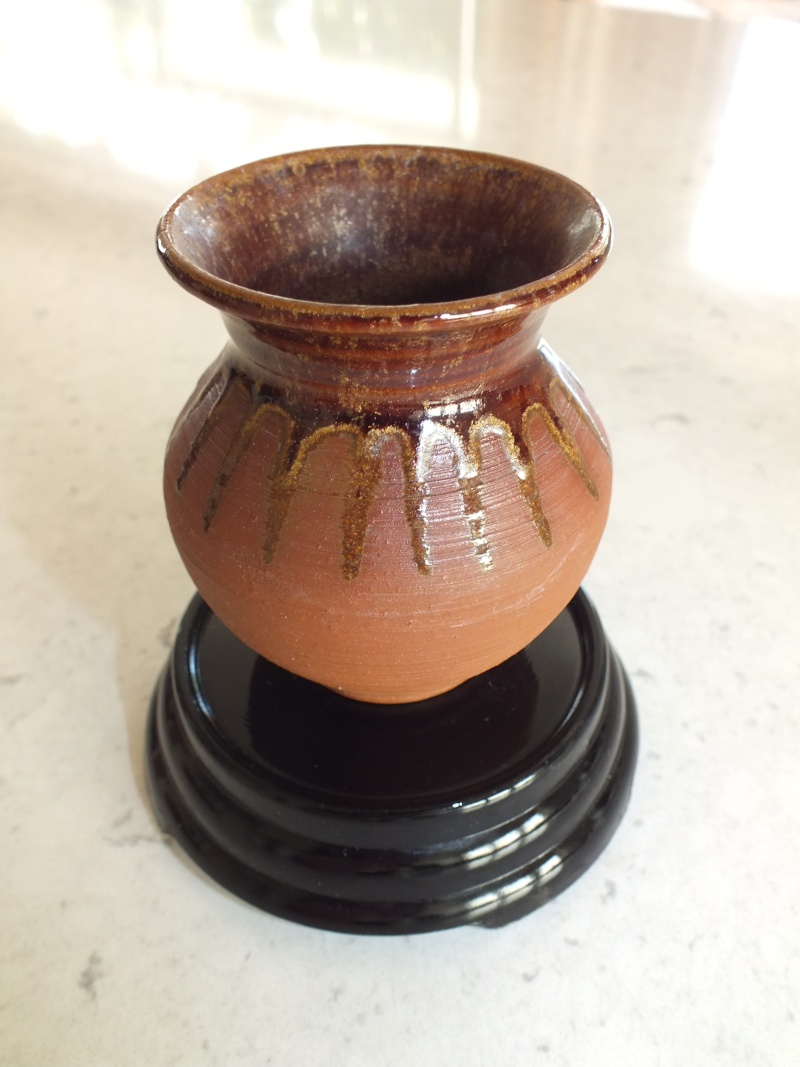 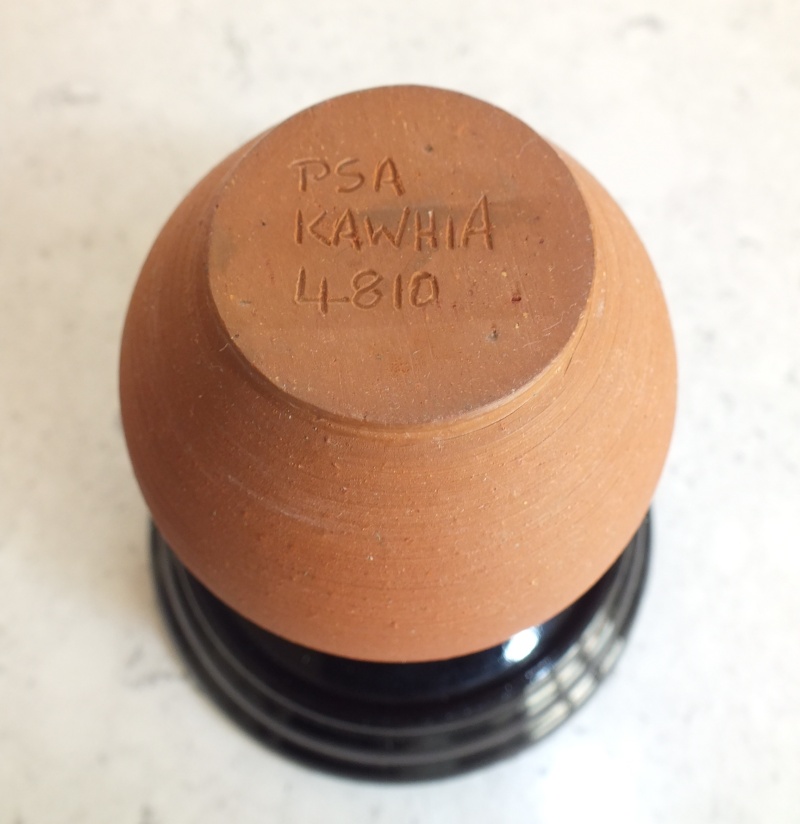 This vase is from the 1970s and was termed 'a glaze test piece' by Phillis. Another larger piece from the same series can be seen on the table among other pots she has retained. The glaze exhibits some shimmering crystalline effects around the edges. 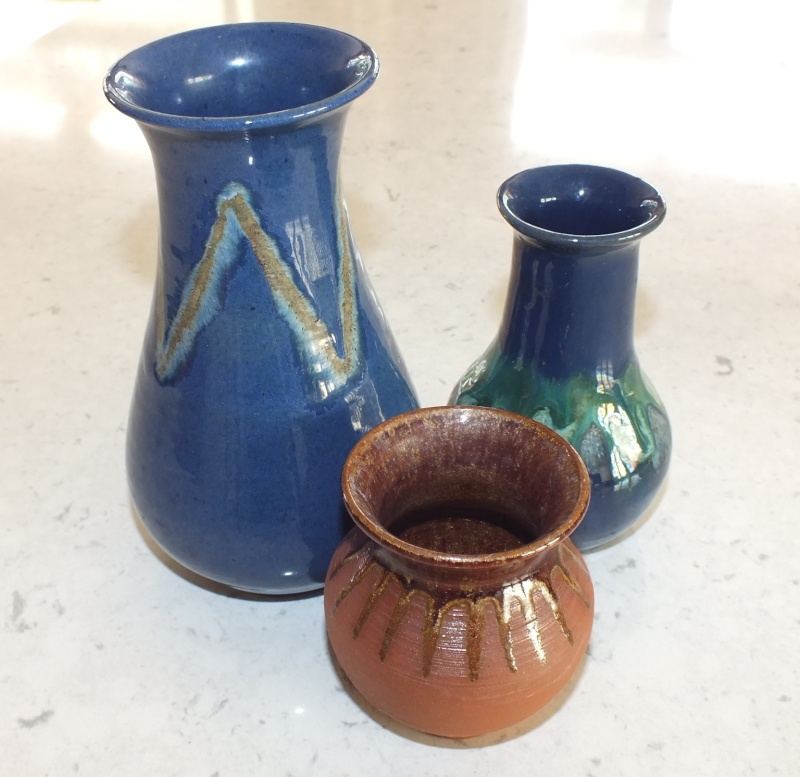 That glaze works well with the bare clay. I like it very much. Thanks for posting these examples teaandcoffe