I've recently acquired two different butter pats and I'm a bit confused by the them. They both carry the transfers from the Golden Fall pattern, but only one is marked as Golden Fall (with the plain black backstamp), with the other simply marked as Ascot. They also use different version of the transfer, as shown below: 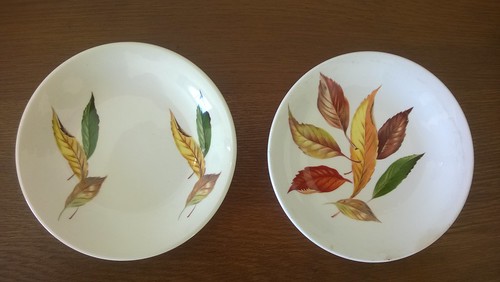 Back of butter pats

Note: both are actually the same size, despite the Ascot pat looking smaller in the photos.

(I know the same transfer was used for the Poplar pattern, but that includes a grey 'hash' pattern over top of the leaves).

I can't think of a reason why they would do this Bruno other than that they could so they did ....

One possible explanation is that the Ascot marked ware was made for a particular retailer, as eg the Roydon range was for McKenzies department stores. Unfortunately I didn't ask about Ascot when I was doing my research. Incidentally to further complicate matters there are actually two Ascot back stamps. The other one has a stylised pair of binoculars. I will drop in a pic later this morning.

I checked out some records and Ascot was sold at McKenzies.
I noted that there were Ascot Cake Plates and also Ascot Butter dishes just for McKenzies in the mid 1960's.

Wow - thanks for the information Maryr and the research Ev!

It had never occurred to me that the different 'house brands' of Crown Lynn might be specific to particular retailers, although it makes sense once the idea is raised that some shops (or indeed Crown Lynn themselves) might want to differentiate their products, or target different market under different banners.

Brilliant Ev. Here is the other Ascot mark. It was a few years before i looked at it properly and saw the connection with Ascot races! This is a little butter dish.

Not sure what it means at this stage, but each of the Ascot entries in the records have the Décor number 800. I have searched for what patterns have the Ascot back stamp and they vary considerably.

Ev there seems to be a new system for putting up photos and I can't make it work! I will have another go later.

Using mumof1's other Ascot backstamp to test out if there are any changes to adding photos that I should know about ....

Yes it definitely has changed !!  I could only use the first option to copy and paste, let's see if it works and I will check out Forumotion for notifications!!

That's no good, let me try again ...
Argghhhhhh no better this time !!