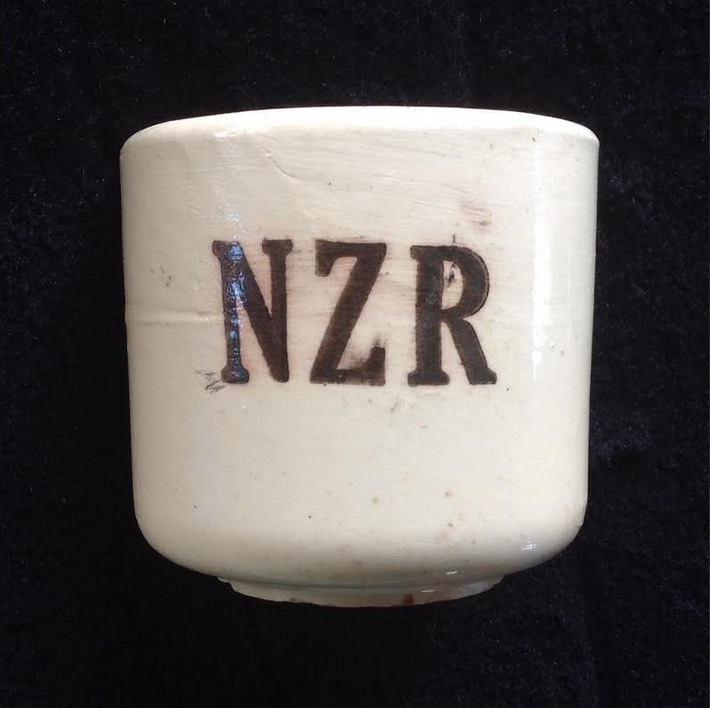 I recently outbid another keen trademe buyer to pay a lot of money for a box of broken pottery. I was thrilled (and still am) because I knew this broken pottery would hold a lot of information. I picked them up Saturday. 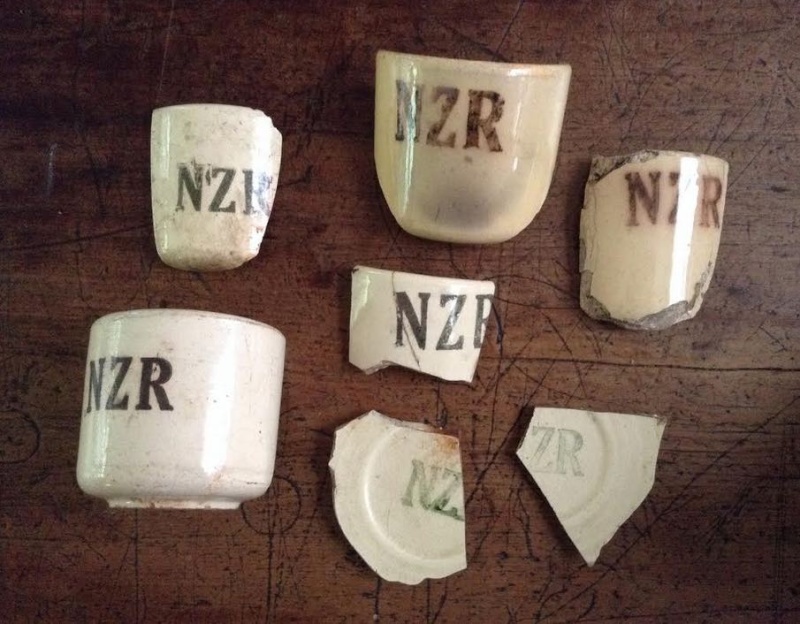 *I will link other examples of these two types later. Done: see bottom of post. 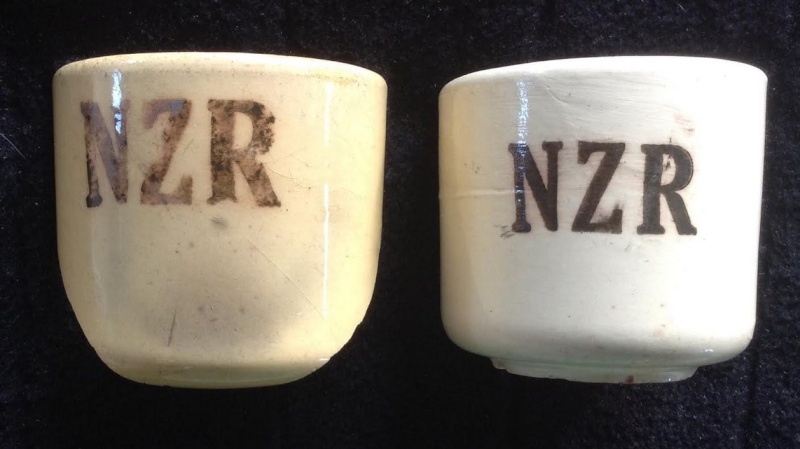 I will be checking the sizes of the cup shards against later CL cups. 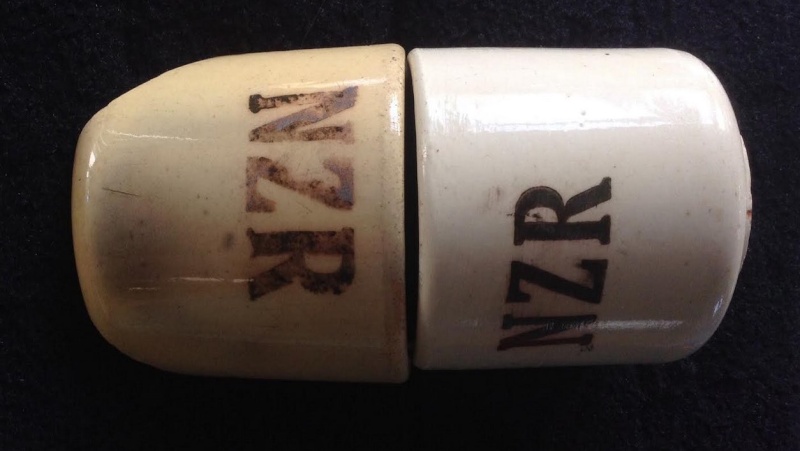 the straw cup (l) is a colour match for Ambrico straw cups
it has what could be mild crazing or stress cracks
the white cup (r) may be vitrified
it has no crazing, but there are brush marks in glaze and/or manufacturing marks in body 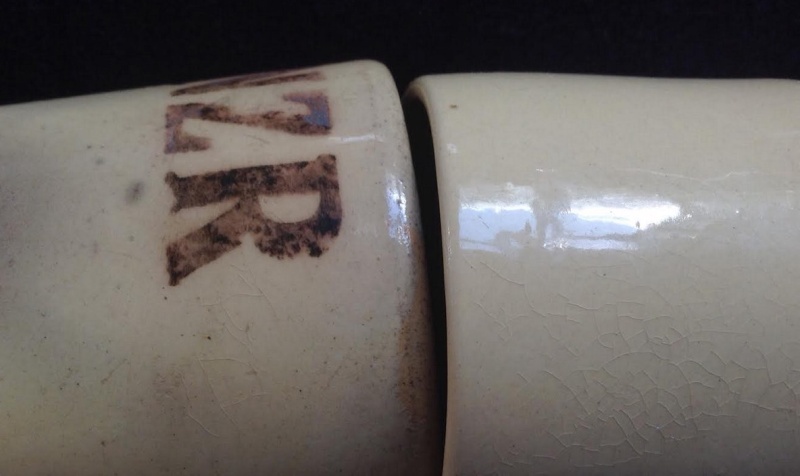 NZR straw and Ambrico straw cup with handle are the same colour
3rd shard (see the photo above with all the shards), straw colour, has no crazing 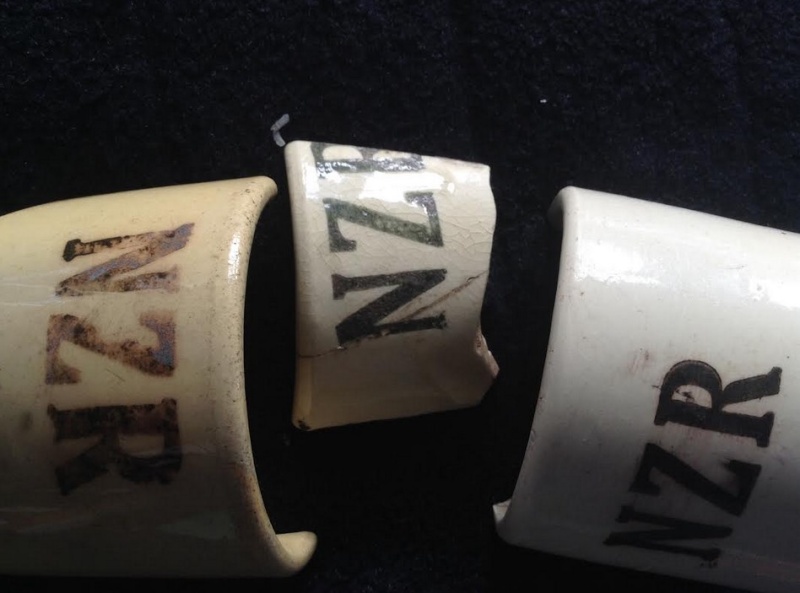 The photo shows three different colours and two sizes of stamp. There is some variation in the fonts.
It is interesting to see that the glaze on the whiter cup has a similar brushed appearance to my US Navy handleless cup. I have not seen this elsewhere on Ambrico pottery. 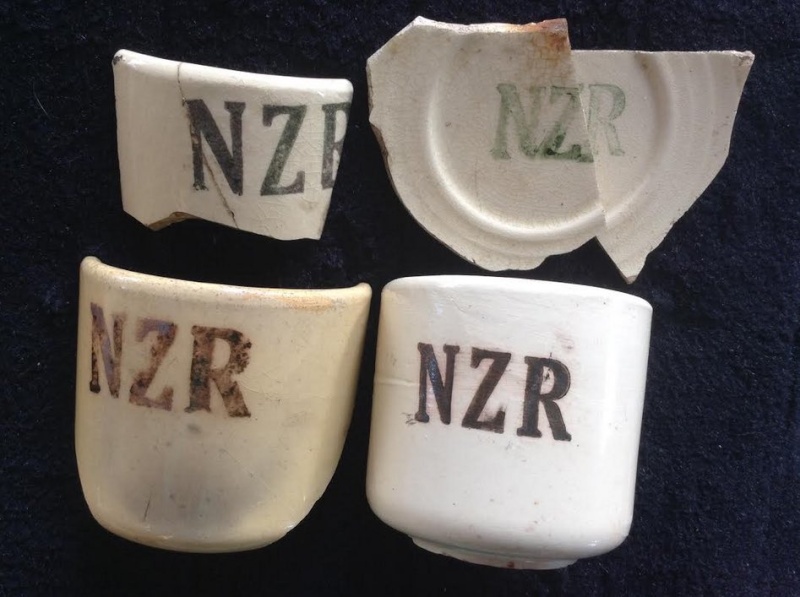 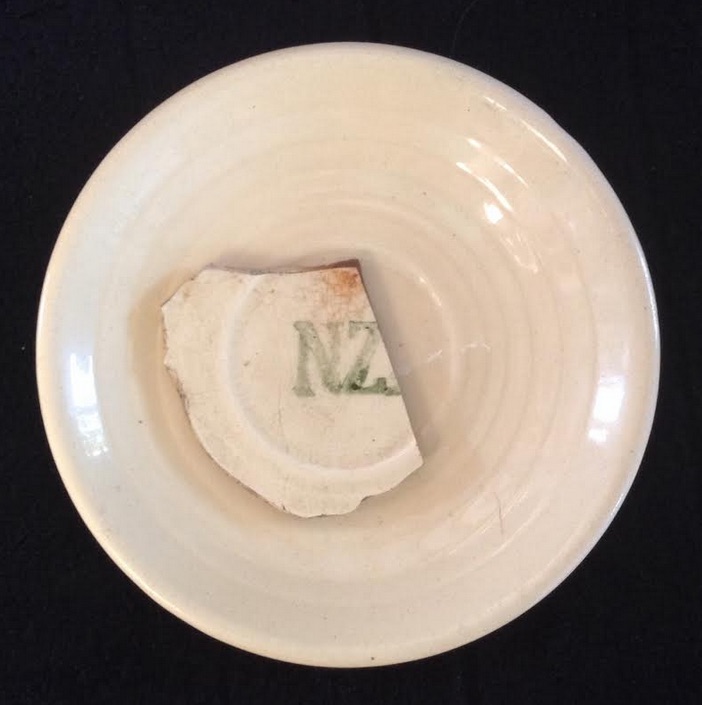 --------------
Discussion
Assuming that these shards are all Ambrico (I will address that at a later time), I think it is clear Tom Clark and co were on a real learning curve with these cups. I do not have foreign shape matches for these cups so whether they were copy shapes or original designs remains an open question.

Part of my rationale for buying these shards is to relate them to later Ambrico and Crown Lynn cup shapes. The following photo is an example.

I have placed the NZR cup forward in the picture to reduce the effects of picture edge distortion (which would have made the outer cups look wider). The three cups are the same dimensions but the NZR footring is slightly smaller: the Erg cup is slightly rounder at its base.

I have previously noted that the saucers we call Paris have two distinct weights. gloworm has shown that the heavier ones are a good fit for the straight-sided, handled, straw cups. The lighter ridged saucers used with the tableware have the same profile, including what for them becomes an oversized cup well.

The straw cup is a match for one at Paekakariki Railway Museum:
http://stationmuseum.co.nz/Interest_1.htm

I am assuming that cup has no handle because I do not see one in the photo.
A similar straw cup, but with a handle, was up for auction at Cordys in February. The description suggested Milton for the maker but all too late I am thinking Ambrico. The handle is beside the stamp, not opposing it, which supports my view that the Paekakariki one has none.
http://www.cordys.co.nz/html/catalog/365.pdf page 10 of 36

The white cup is a match for one at the Auckland Museum (and which can also be seen in a photograph in Val Monk's Crown Lynn A New Zealand Icon, page 19):
http://www.aucklandmuseum.com/collections-research/collections/record/am_humanhistory-object-14821?k=K3905&ordinal=0

---------
I will be adding more on this topic.
The second instalment will address English NZR cup (shards) from the same lot.
---------
24/4/18
This is as good a place as any to store my picture of Peter Jack's NZR cup.
It has the same green stamp as the saucer shard so no doubts that it is indeed Ambrico. 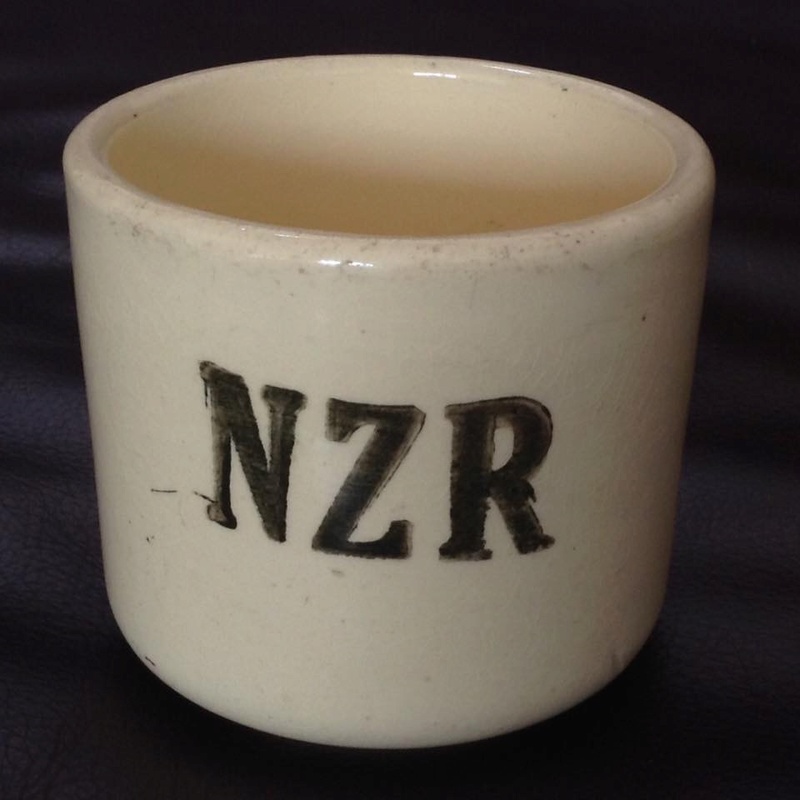 This is fantastic thanks Jeremy as it's real grass roots information.