I found a pot this morning at a garage sale. The interesting thing about it is that it is dated 1948 and marked MC or MG between an L and a C. 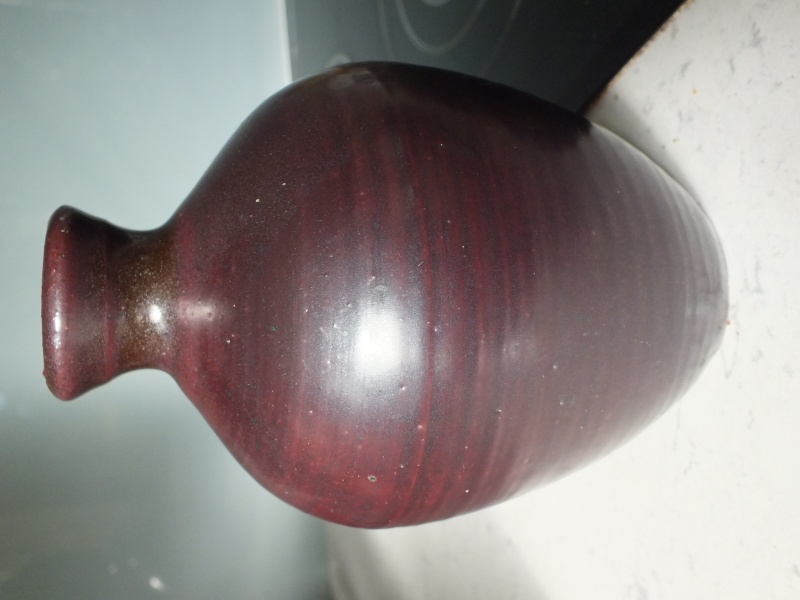 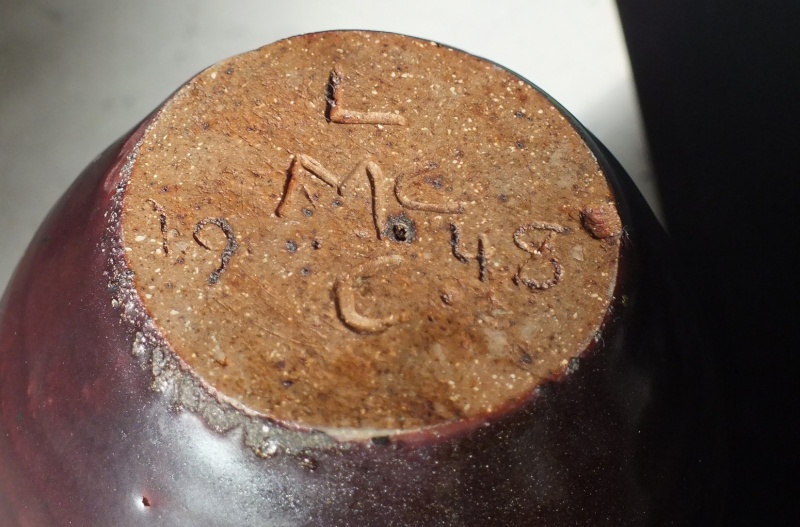 The pot stands 165 mm high. It looks to be in either an iron Tessha glaze or something manganesey. I'm pretty sure it's from New Zealand. 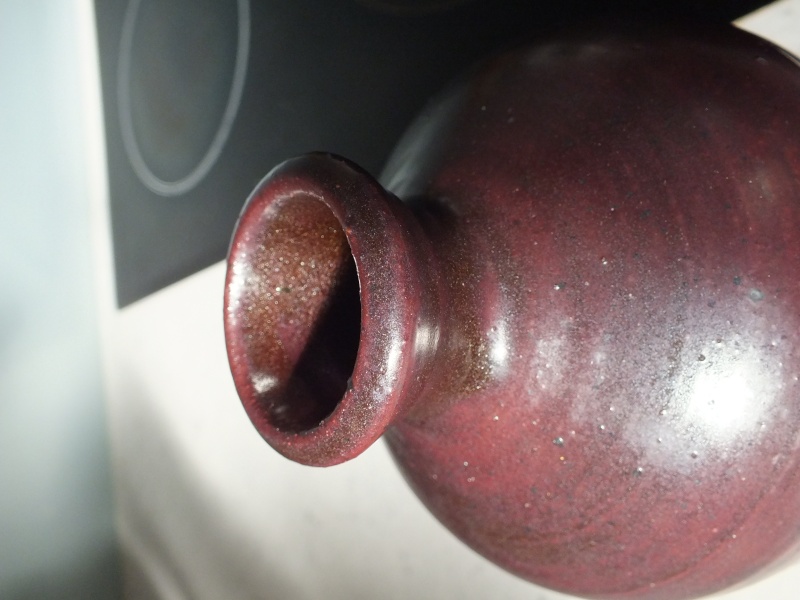 1948 is the crack of dawn for the New Zealand Studio pottery movement and the number of candidates working in stoneware in 1948 can probably be counted on one hand. The form and potter's finger marks around the waist remind me of R.N.Field's pots, but the mark makes me think it could be a very early Len Castle. He started potting in 1947 so this pot could be within his the first 12 months as a potter - if its his.

I have seen a Len dated 1949, and there is a nice tessha glazed vase on page 125 of Making the Molecules Dance, also from that year. 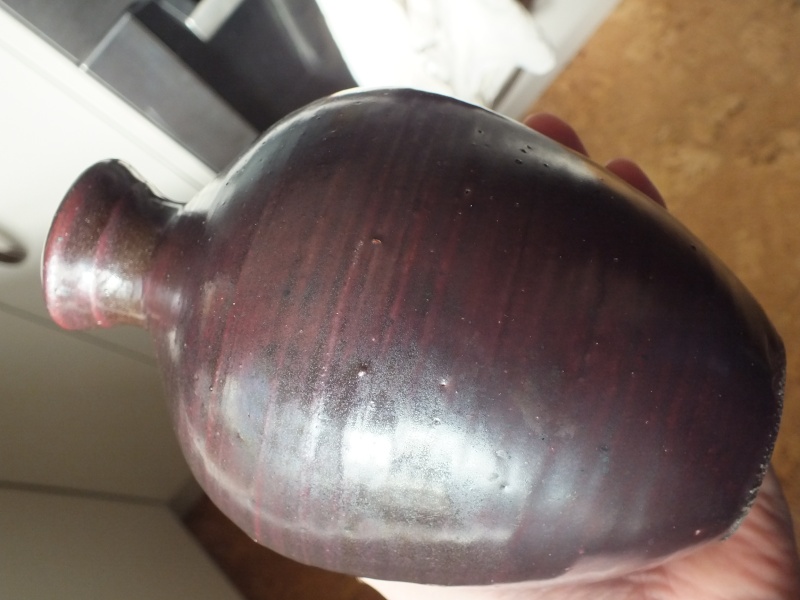 Has anyone seen this somewhat confusing mark before and do you think this could be a Len? As you can imagine, I'd love to know.

Why have all my photos turned sideways?? I tried to reload them but the upload program flipped them on the side again. 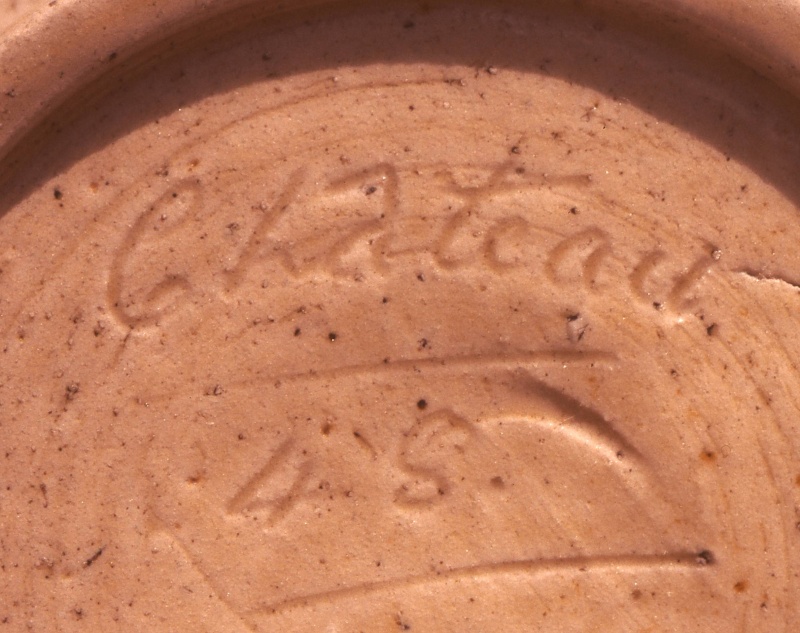 Thanks for having a look at it Tim. You are right, the hand looks different. But who else might be a possibility for 1948? It has a good feel in the hand if you know what I mean.

That's a good question. And I've been trying to find out who else was around then as some of the early Crum era pots appear to be made by potters other than Castle, Stichbury, Barrow, Storm....you would think that RN Field would have popped a few pots in those big industrial kilns......It does not seem to be the case.....why didn't Brickell put pots in the salt kilns? Or Pat Perrin?......Who was actually in the Field pottery class?.....I tried asking Avondale College.....no luck. Stichbury was teaching pottery to trainee teachers.....and his teacher was also teaching pottery beforehand. Was his name Clarke? Can't remember...bit of a mystery really....but keep searching.

My Mum was one of those trainee teachers

she would have been doing her teacher training late 60s

Just a random connection there.

Cat - its quite nice having a tangible connection to this first crucible of New Zealand studio pottery isn't it?

Tim - It probably doesn't matter that much, but in 1959 Len Castle gave a short bio for publication in the catalogue for the exhibition of New Zealand craft work: http://assets.aucklandartgallery.com//assets/media/1959-new-zealand-craft-work-catalogue.pdf.

In it he wrote that he began work as a potter in 1948; but later, in books you've been involved with, he gave the date as 1947. Do you think we should believe the earlier source or what he mentioned to you some decades later? Or perhaps might the discrepancy suggest that if it was 1947, it was later rather than earlier in that year? Thanks.

Thanks for that link, haven't seen it before....printing it out at this minute! Ok yes the 47-48 issue is something I have always wondered about and usually I make up a story in my head that in 1947 Castle was learning to be a potter and by 48 considered himself a potter......it's just for convenience really. I suppose it takes time to get set up and history tends to shift and move....but as far as we know 1948 is the earliest date on any of the pots. But the 1948 pot I have is not by someone who's just learning to throw.....they have already mastered that....so I guess that fits in with the 47-48 learning then exhibiting....are you a potter if you have never sold a pot?.....perhaps Castle sold his first pots in 48.....therefore that was what he considered to be the starting point....good question.