Latest topics
» Vitrified Patterns are moving to their own Gallery

» NZ POTTERY? marked to side and base with S is Stephen Carter

» Thinking about Selling a 488 Mint Condition What is It Worth

I've acquired a few more of these. There are two or possibly three different sizes and a range of colours. In some cases the detailing is highlighted by adding another colour or by removing the glaze. 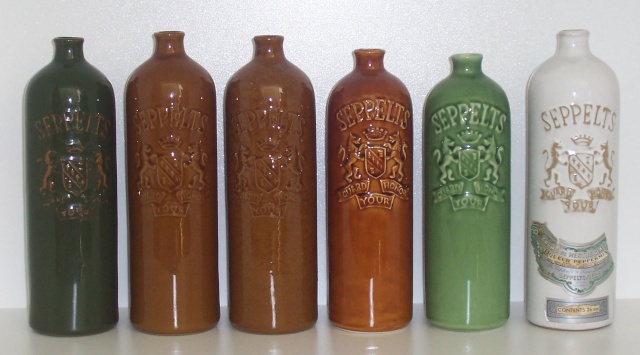 Wow that is a great collection Tony.
When you say 'removing the glaze' do you mean just using a clear glaze over the terracotta clay?

What it looks like is that the pigmented glaze has been wiped off the raised section of the coat of arms exposing the clay body - as on the white and darker green bottles. There looks to be a transparent glaze over the top. There are two different bodies - a grey brown and a near white:

A maroon one, darker than this in real life - less pink: 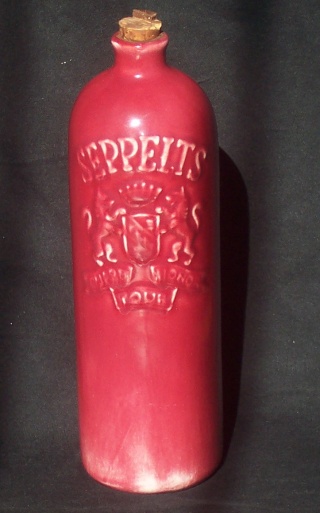 That is stunning Tony!
I can see why you needed it - to fill out your collection.
What years were these made by Crown Lynn Tony?

How many colours do you think they made?? A great collection and backstamped too. I think we concluded they were of similar ilk to the ginger jars?? I wonder then if they share the same colour range...

Perhaps there is a yellow one then Heather?

I think the dark green one is the probably the same glaze as my Armed Forces Bowl.....

I don't recall seeing any more colours than the ones I have (so far) but I think there are versions where the coat of arms had gilt highlights.

The smaller ones with the tiki and three stars backstamps have a white clay body and the others a tan body. The two most similar to the ginger jar colours are the lighter green and the maroon one. Can only wait and see whether cobalt blue, mint green and yellow variations turn up.

I am the proud owner of a green Seppelts bottle and my other half only wants to know what would it have contained ....? Hmmm ....

Made in Australia - Seppelt Wine Jug

I picked this up in Australia - Umm not sure If I should post it here as its not NZ made.. 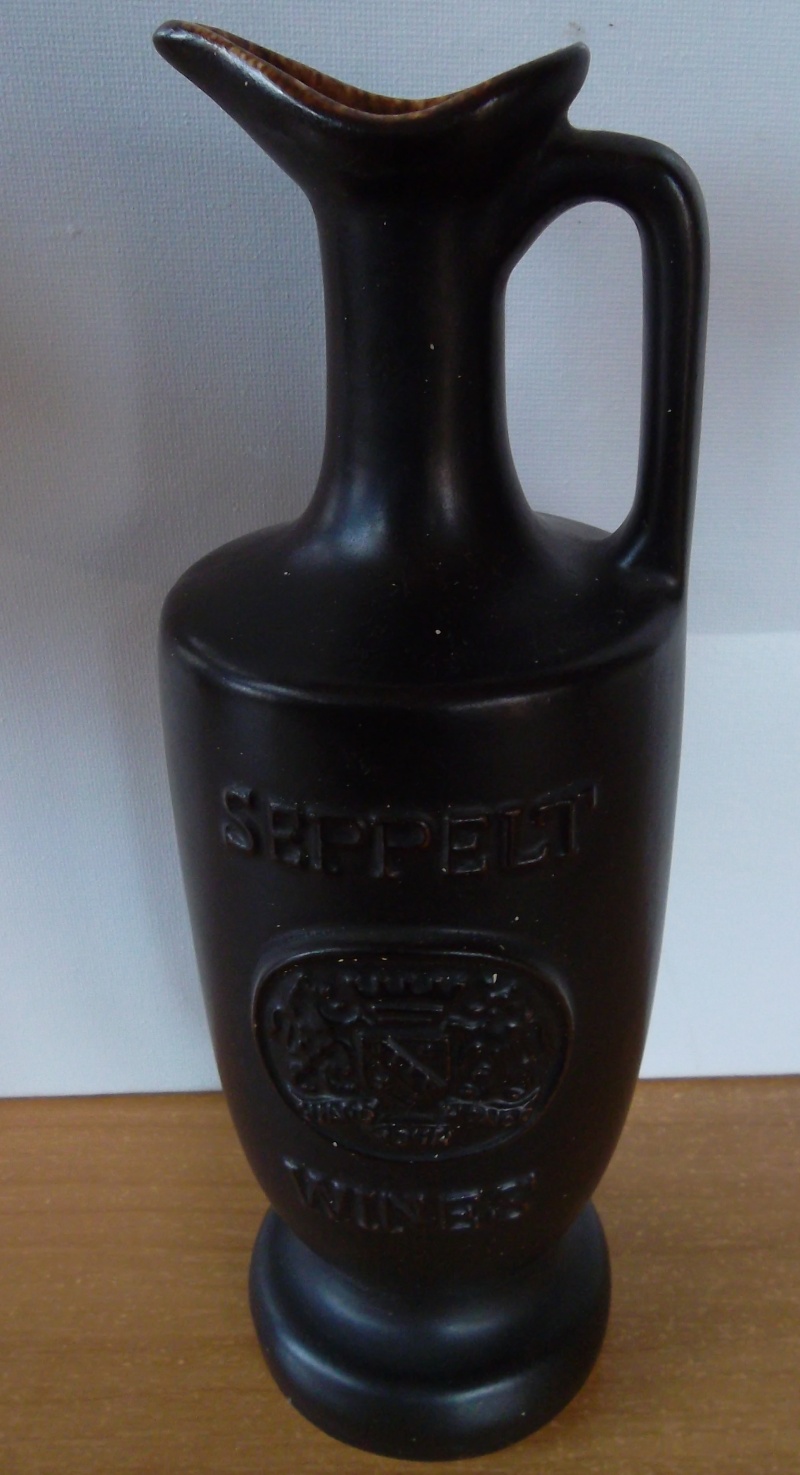 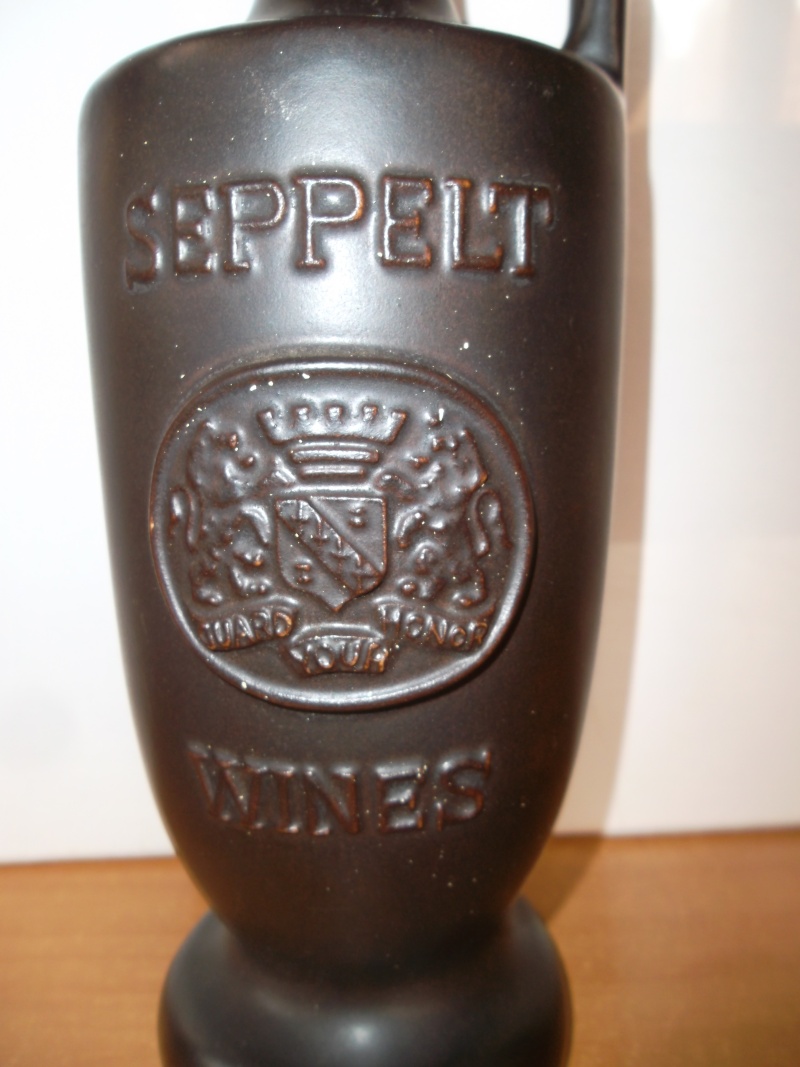 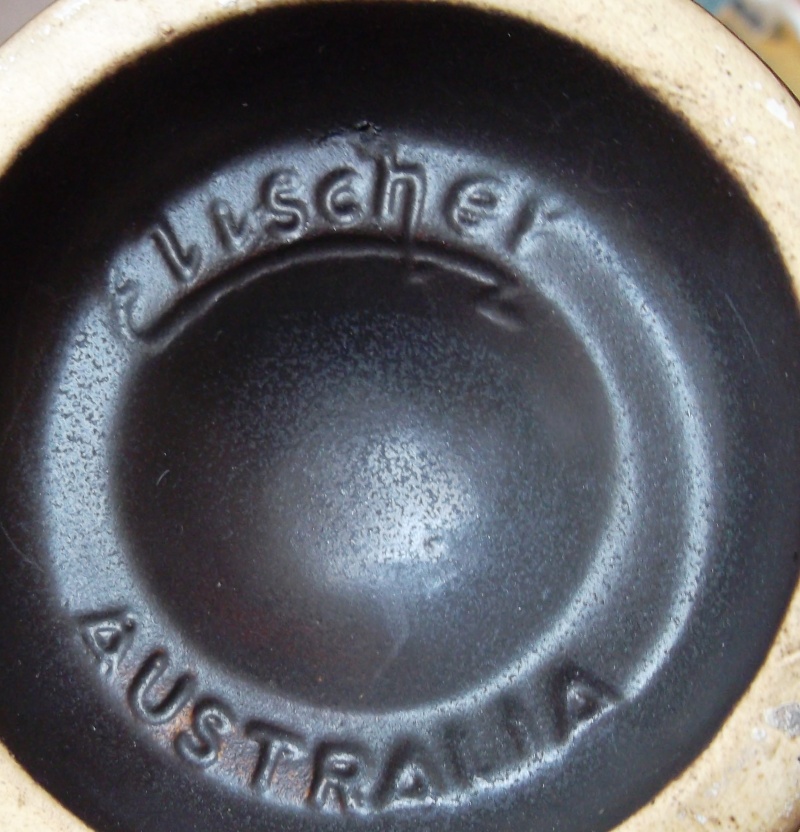 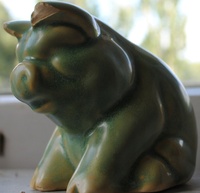 Elischer made "The McCallum" jugs just like Crown Lynn, at least two sizes.

My Seppelts bottles arrived Thursday and they are in pristine condition. 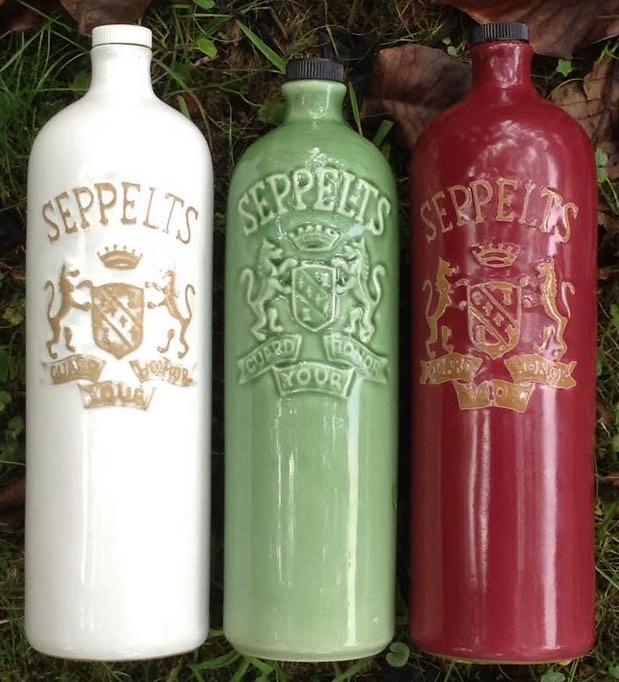 One red, one white, with Ambrico and CL marks, and a slightly shorter green one with tiki mark, all as per TonyK's photos.

The real point of adding photos here is to get a better look at the red bottle, which has a much clearer embossed area. These reds are always hard to describe but I think the representation on our computer is a good match for the bottle placed right beside the screen. Please excuse the reflections: I try my hardest to find a location without them but never seem to have any luck. 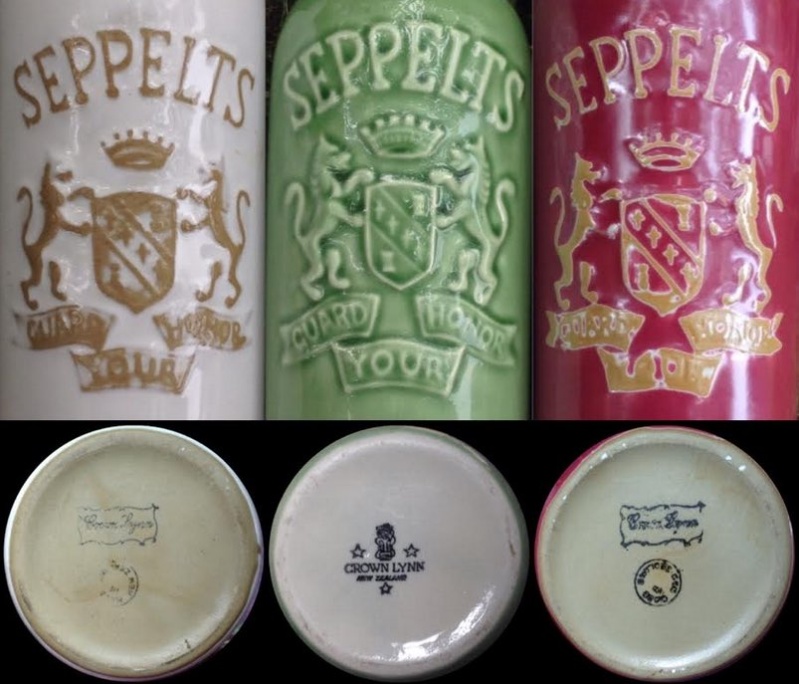 The white one presents as cleaner than TonyK's too as it has lost its paper labels (although of course I would not recommend removing labels as they too form part of the bottle's history).
.

Love these bottles! In all my years of op shopping I have never found one. Interesting that they appear to be of different heights. Tom Clark told me that they didn't learn to "block and case" to create identical moulds until the English experts arrived after the war ended.

In this case I think the two distinct sizes as first described by TonyK are likely connected to the change in clay body, which is also marked in time by the different backstamps.

I have found that cups and mugs of the same shape vary quite a bit in size over the years, which I think would have many reasons, my two 772s being the most recent example. To test Tom Clark's comment I would have to compare multiples of very early shapes, but it is mostly cups and mugs I have, and they are largely jiggered ware rather than castware.

I am intrigued by the earlier of the bottles as they have both the early Crown Lynn backstamp and the Ambrico Made in New Zealand stamp, perhaps indicating that they were made at the very start of the use of the Crown Lynn name. I wonder if that arrangement was then replaced by the single Crown Lynn New Zealand one ??

I have frequented antique shops for as long as I can remember but less so opshops. Not that I would have even noticed Seppelt bottles anyway. Likewise I wouldn't have noticed my Carlyle bottle if I hadn't seen them here. Also the Seppelt bottles may get snapped up by bottle collectors: I should talk to Brooke and Olwyn about that as they have bottle collecting connections. I can only remember the one auction on trademe for Seppelts and I left that for Ev but these ones were listed as a buy now so I felt compelled to act lest they disappear. I think they must have been sitting in a collection for decades.

Bit later
Brooke was over this arvo and agrees the bottle collectors likely have all the Seppelts.
.

I am Jenna and I live in Adelaide, Australia. I work at Seppeltsfield Wines in the Barossa Valley, which was the ancestral home for the Seppelt family. I am starting to inventory the collection of bottles/ photographs etc that we have on sight and am hoping to learn about the significance of these Seppelt Bottles. I have a brown one in my collection and was wondering the rarity of the bottle. I did read that they are difficult to come by in antique/op shops, and therefore I would assume sought after by collectors.

If anyone has any insight I would greatly appreciate it.

Welcome to the site Jenna

These bottles may be easier to find in Australia, perhaps on ebay or one of the online sites.  I would say that most of them that were made here were sent to Oz.  In New Zealand they are fought over when they turn up on our online trading site Trade Me.  There are just not enough to go around.
I was lucky enough to win a green one last year and I was very pleased to do so as these were made during the 1940's and are collectors items.

Jenna, like Ev I bought my bottles on trademe.

I bought them on a "buy now" a short while back and I think I was the only viewer so it may be that no one else even knew they were for sale. They had been in another collection for decades.

Thank you for your help, I might have a look at the Trademe site and perhaps an equivalent site in Australia.

***Before introducing the glass bottle, please note that the "tiki and three stars" stamp on the green bottle also has the words "New Zealand" which makes it a mark that we do not have in the GALLERY***

Antiques Club on Wednesday I took my Seppelts bottles along as the club night theme was the colour red. (It was in no way connected to the visit to our site that day from Jenna from Australia: I'd made my show-and-tell choice earlier in the week.) During the course of the evening Brooke told me there was a glass Seppelts bottle for sale on trademe. I didn't jump at it immediately as I'd seen other Seppelts bottles before and they were of no interest but a short while later he showed me a photo on his phone and I couldn't believe what I was seeing: same shape bottle in glass. At 25 x 7.5 I thought it might be same size as the green one. Brooke sent me the link and I bought it when I got home. 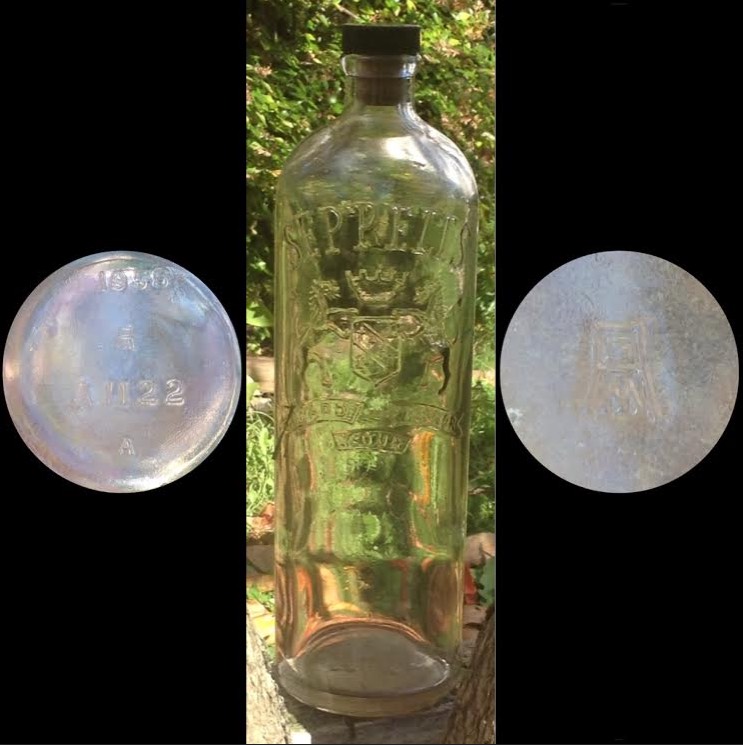 I will have to check up on the glass-maker's device some time.
(The big A reminds me of Albrecht Durer's device.)
That was easy: AGM
Australian Glass Manufacturers Co.
Melbourne Australia
From: http://koghisberg.com/?p=5071
AGM set up ABC Auckland Bottle company in 1922 but the glass Seppelts bottle does appear to be Australian.

Here are some re-dos of shots from my original post to include the glass bottle.
Note that it is slightly smaller than the green 1950+ bottle but otherwise pretty much the same. 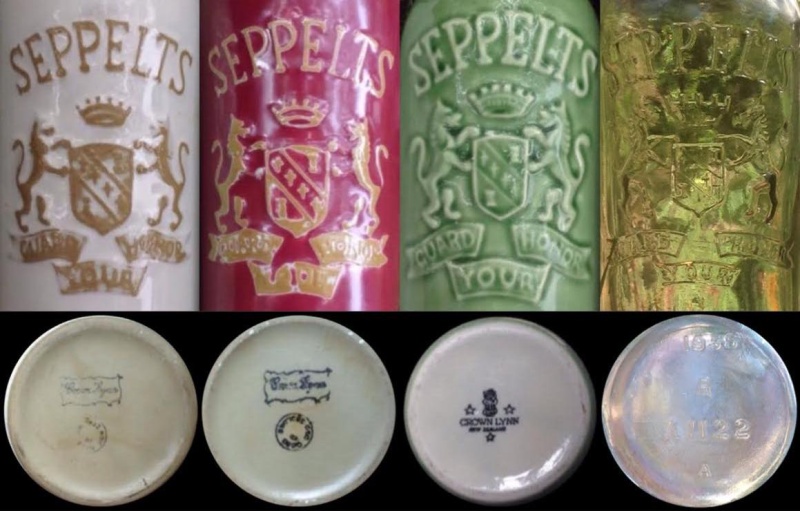 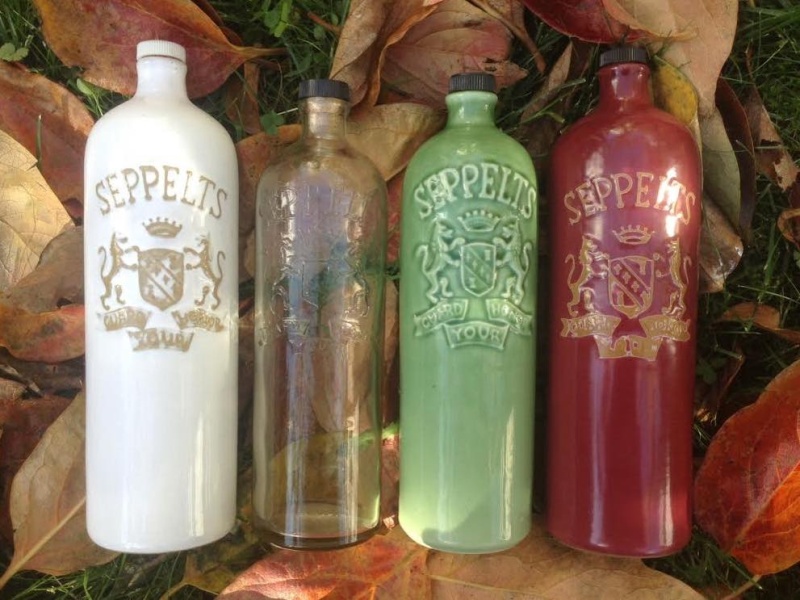 As for what the crown Lynn bottles might have contained Ev, a couple of mine smell like cough syrup, perhaps an indication of a fortified wine. Seppelts is known for its Port.

My white one has the partial remains of a paper label saying "Creme De Menthe Glaci...." and "Liqueur Peppermin...."

White for mint, red for cherry ... perhaps they are colour-coded.

There is a red Seppelts bottle for sale on eBay and I've decided not to buy.

Seller originally had it advertised as Italian because of a photo mix-up.
We've sorted that out now.

It looks like the smaller size one with the tiki mark to me.

The starting price is AUD10 and shipping to NZ quoted to me as AUD35.
NZD and AUD are just about equal atm.

What do I have here

Had this bottle for 25 years, my mother had it before me. I remember her getting it checked out by someone they didn't know what it was.

A few years ago I found a green Seppelts ceramic bottle like the ones in this topic, can anyone tell me a value? It's a beautiful bottle and I doubt I'd part with it but can find little information

These bottles are not often seen in New Zealand, but I did manage to buy one that was listed on Trade Me a few years ago for $25.