I have had my eye on Romina Marinkovich's mugs since even before I started collecting mugs so imagine my delight in seeing one at the Salvation Army Family Store for just $2 in mint condition (and made this year) when they retail at $58. I even had it on my maybe list for the next trip to Auckland, so I get to save $56. 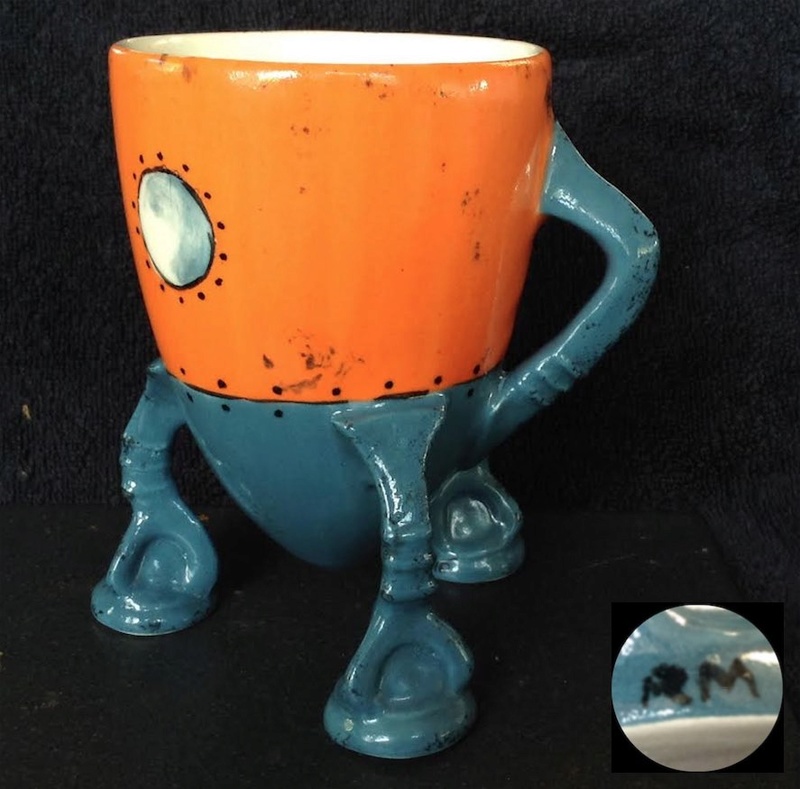 I have only ever seen these at The Vault (formerly of High Street and now located) in Ponsonby Road. The Vault also has a Wellington store.
https://www.thevaultnz.com/category/fruitfire/149.aspx

Given the choice, I don't know which I would have bought so it's good to have my mind made up for me. I couldn't have bought one of the Thunderbirds series because then I'd only want a whole set. The only alternative really would have been the Rocket Mug, which is also pretty cool but at $2 I'm good ... and this one has the grooviest feet!

Romina also has vases and her trademark Andy Warhol Bananas at The Vault. Her own Fruitfire website also has farm animal mugs "Someone not Something" and other items.
http://fruitfire.co.nz

While at Sallies I also bought a Wattleware mug similar to Ev's one (so I won't bother posting it), but a bit smaller, which was overpriced (for an opshop) at $4 but with my saving on the Luna Mug-ule I'm over that already.

The Fruitfire work all appears to be slipcast so I don't know whether it belongs in this category but we don't really have one for slipcast artware, as opposed to slipcast commercial ware. The mugs are cast as components and then assembled so each is unique.

Footnote.
It turns out that the Wattleware mug was actually a cup. I know this because since then they put more out for sale, but with saucers. Sallies let me have one with no further charge.