and he is an exquisite Modeller and is now working at Studio Ceramics, but they have announced that they are closing *sobs* so I want to record this as a tribute to him ...

Anyway Bruce let me go through the Modellers drawings that were contained in a desk that came from Crown Lynn and we have had many insights thanks to his generosity.

Bruce showed me an urn that he had found a mould for that was at Crown Lynn and it fascinated him and he made one and decorated it in gold.  He got into all sorts of trouble for doing this as gold is so expensive.  He had no idea what the Amphora represented and I was gobsmacked by it as I knew that it was made to celebrate the making of over a hundred million or so pieces of ceramics by Crown Lynn in 1959 and was given to Walter Nash in a ceremony of celebration.
Te Papa now have the original http://collections.tepapa.govt.nz/object/187196

I took a photo of Bruce and the Amphora and I let him know the history of the Urn.  He wasn't aware that it had a lid. 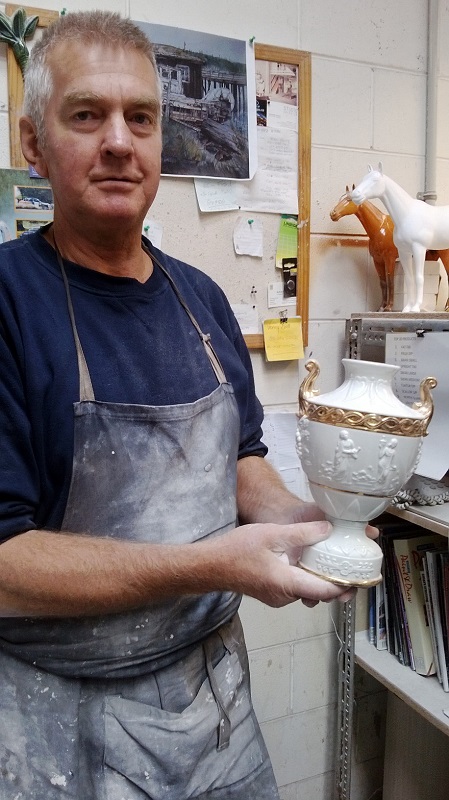 Bruce has donated the Amphora to Te Toi Uku the Crown Lynn Museum and also the desk filled with Modellers Drawings and this makes me extremely happy.

Re: Bruce Yallop worked at Crown Lynn as a Modeller for many years

How wonderful. What a generous man.