Carousel Pat. 493 is a lovely pattern and I'm slowly pulling together a 4-place mixed setting of Carousel and Four Seasons (Four Seasons being released under the Kelston banner vs Carousel under the Crown Lynn brand). 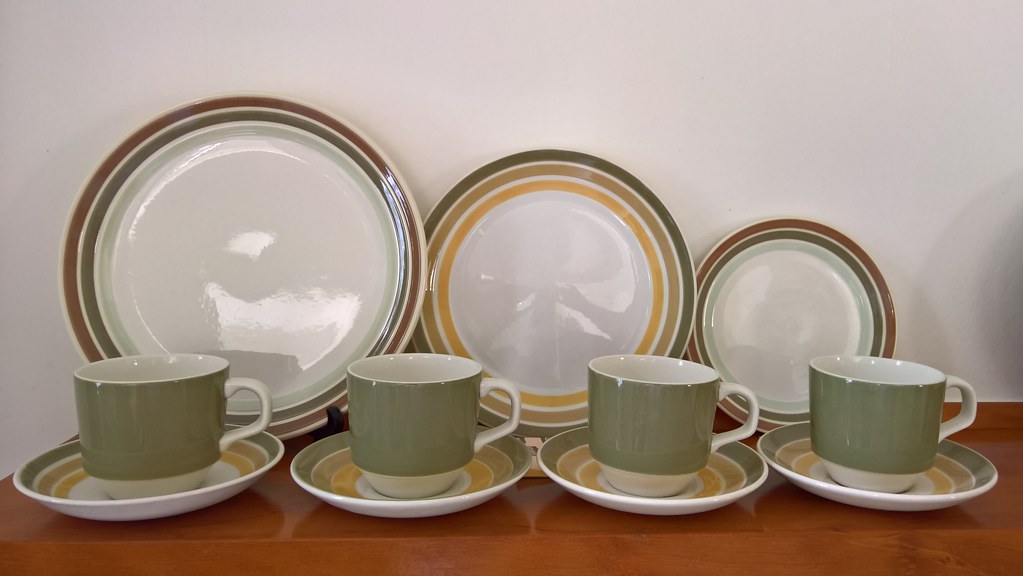 Anyone that's encountered Carousel knows that there is some variation between pieces. From the 6 saucers I have, I've counted 3 different backstamps, 2 colour intensities and 3 different banding styles. Add to that there are two different cup styles (3012 and 3019) and in my set saucers with two different sized wells and there is a lot on potential for mix and matching!

So for fun decided to make a quick mix 'n match quiz - can you match the Carousel Backstamp with the tops of the saucers?

Simply match backstamp A, B and C with the saucers 1, 2 and 3 (no double ups)
The bonus saucer also matches to one of he back stamps.
Click on the images to see a larger version.
I'll post the answer in a few days

I have too have noticed variation as mentioned.
Okay. I'll go with 3c. 2a and 1 and bonus with b
Janice

The thing that impresses me about these patterns is that the cups have clear glazed handles and base. Someone told me how they achieved that but I can't remember. Also the plates often have shadowy bands on the underside. This is from the bands of glaze volatilising slightly in the heat of the kiln. The plates were stacked very close together.  These sets are real quality.

Maryr, As I remember the coloured slip was applied to the unfired leather hard ware before the ist firing. After firing clear glaze was applied and the 2nd glost fire.
The shadowy bands you mention are from the ist fire as the plates were stacked on each other.

re the backstamps, would suggest C is the oldest, then B and finally A which reflects the need to show as much information as possible for the consumer.

I would also suggest the wide bands are the oldest, the tighter were what we sold while I was there. Also spent some time trying to produce some in the decorating department much to the amusement of the ladies.

Thanks v much Dale. When they applied the coloured slip, did they spray or paint it? How did they protect the white bits of the cup from getting colour on them? It seems a pretty magic process to me.

Wow - some good information there - thanks Dale.

JanPots - thanks for having a go - that is pretty much how I would have guessed as well, but from the plates I have they matched as:

My gut feel had been that backstamp 2 was oldest, being similar in style to backstamps from the mid-late 50's. Backstamp 1 is so similar to Ponui which came out in '69, while backstamp 3 matches one on a piece of Earthstone ware I have (which I have always assumed was released through the seconds shop).