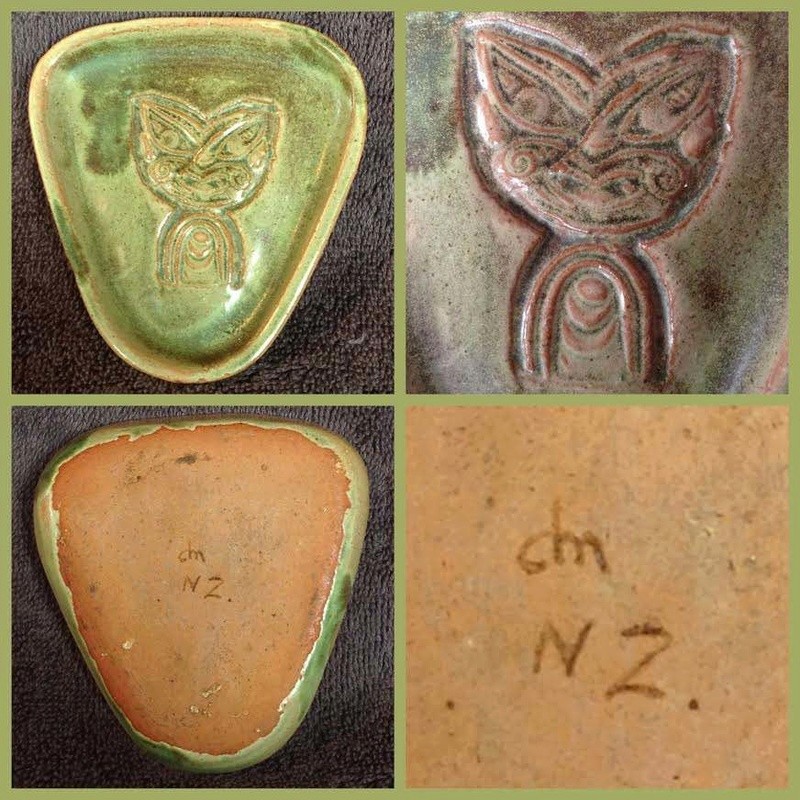 Joss gave me this on Friday. Bought from the Blockhouse Bay antique market.

The inscribed mark could be chm, or clm, or cm etc.

I showed this to Tim Caulton on Saturday and he had no ideas of maker or age.
I thought the colour indicate earthenware but Tim raised the possibility of stoneware.
.

I do have an unproven hypothesis about this mysterious type of ware which pops up occasionally.

It is quite distinctive and of New Zealand studio origin, but almost entirely without documentary literature.

Its characteristics are:
- Red to orange clay petrofabric that appears on first impression to be earthenware, but on closer inspection is quite high fired - tending towards stoneware
- The appearance of having been fired in an electric kiln
- Industrial glazes all in the same family (don't know the technical term) - made up of opaque white and either green, or blue
- Etched, stamped or excavated pictorial decoration, often with Maori or rock art 'primitivist' themes

In art historical terms, they look to my eye to be early to mid 1950s. This is somewhat supported by the forms these currently undocumented potters chose to use, which are usually in those 1950s biomorphic/amoebic/kidney sort of shapes.

My hypothesis is that it is this modest ware, out of which might have developed a popular, more design-led New Zealand ceramic modernism had the Leech/Cardew/Hamada Anglo-Orientalist philosophy not seized the craft pottery movement with such vigour in the wake of the 1957 establishment of the New Zealand Pottery magazine. This moment in the development of decorative and utilitarian ceramics in this country never found its way into the literature. Quite simply, it preceded its advent.

Some potters who used these sorts of glazes in the 1950s include Ina Arthur and Doris Lusk/Holland.

What I think we may be seeing in these objects are harbingers of an epoch that never really dawned in New Zealand; a future which may have led to there being more Roy Cowans in the 1960s and 70s and somewhat fewer Barry Brickells, Peter Stichburys and Patricia Perrins (in her later years). I am happy to hear contrary thoughts...

I may have seen a similar figure somewhere before, or perhaps I've seen that koruru face on our 10 cent coin more than once ...?
It is possible that the letters are dm.

Thank you teaandcoffee for a wonderful would-be history lesson.
It sounds as though Tim may have had similar ideas but did not form such a clear picture for me. I'm excited and I'm sure Joss will be too when I tell him.

I have seen random pieces of pottery with similar kind of impressions pass through trademe and have considered buying but not known what to make of them. They haven't moved particularly fast or reached even modest prices.

Thanks Ev for showing the similarity to the ten cent piece.

And yes I guess the mark could be "dm". The photo probably shows as much as I can see with my naked eye (right eye focuses to about three inches) which is that the top of the "c" gets as close to the upright as it possibly can without actually touching it, while the lower end completely misses.

I hope we get to see some more of this work here to get a stronger idea of this body of work. I will continue to show it around.
.