Would love to see this range in colour if anyone has them all ....

(Yes this is wordy. Do remember to stop and breathe now and then.)

Ev, as you haven't used an exact date, I'm guessing you are offering 1967 because of the pricing being decimal with LSD subtitles bracketed.
If it's 1967 then the cans are most likely 782s with 793 saucers.
If the ad is 1968 then there is a possibility they could be 3618s, 3022s, or 3023s, which I think less likely. How long did dual-pricing continue for?

One range of colours for two shapes does not necessarily mean all colours in both shapes, they may have been spread between the two.

We already have some of those colours recurring in 782 cans and others not appearing at all ... so far. Could that then indicate that some of the colours were for vit only and others for E/W only? Or would the glazes have been designed to worrk as both E/W and vit?

I have lifted some text and a picture of coloured 782s from the long Cook & Serve topic.

"24/6/14 Coloured cans.
"As it is a while since I posted my different coloured cans and I now have some new ones I thought it time for an update.

"White and lime green came on Form saucers as complete sets. The mushroom one is a Reflections can and belongs on a Reflections-patterned saucer. I believe some of these belong to Viking sets: brown, oyster, yellow. The two standard Cook & Serve colours, tango blue and yellow, bottom row each end, were found without saucers."

I have no inclination to change any of that. (Of course Viking is still under discussion too.) That gives us BROWN, TANGO BLUE, AND OYSTER. In addition I suggest that OLIVE GREEN (one colour, no comma between words) is the colour of my dark green saucer, which we have seen elsewhere paired with Napoli cans. Here is a colour sample as seen on a saucer. 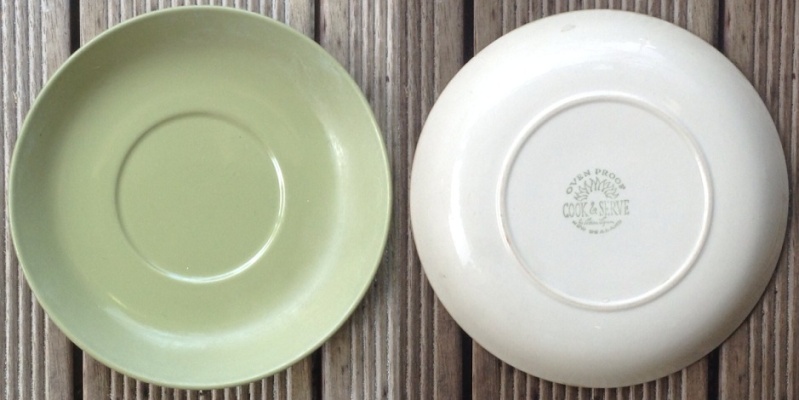 I think Janice is the collector of 3020s. Would the two of you be able to suggest the correct colours for that shape? Between the two shapes we may be able to put the whole colour range together.

Trawled back through my notes and they say this is from the 1966 - 1967 folder from the Museum. That is as specific as I can get as I didn't photograph the page dates as I had enough to do