Another batch of pots 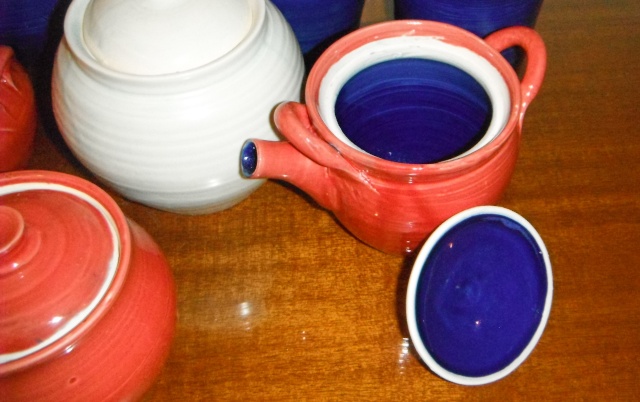 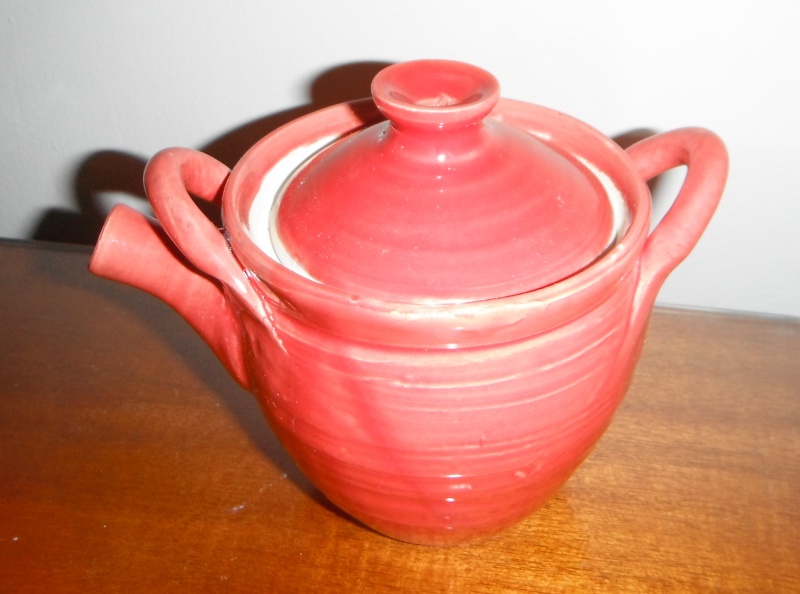 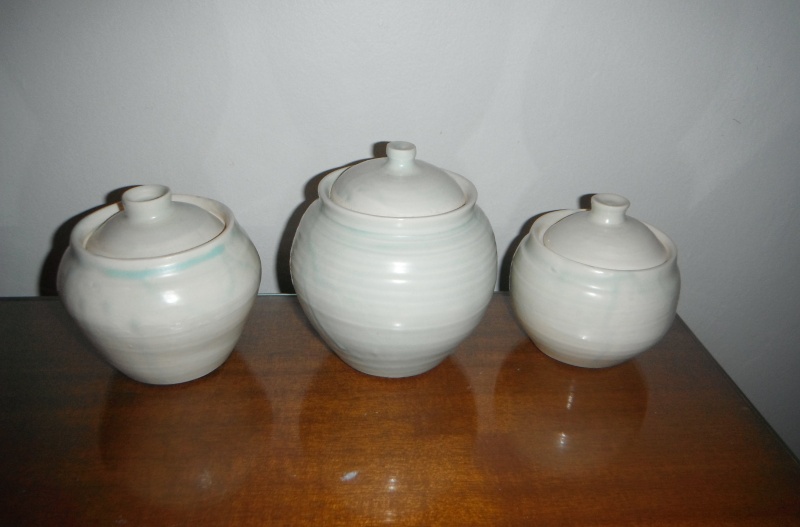 Great work Tony Love the strong confident shape of the lidded bowls and the blue insert? in the pink teapot is a real eycatcher and suprise..

Keep up the good work.

I coil built this garden pot. It's 450mm tall and is currently wearing a linseed oil and beeswax coating for its appearance in an exhibition. Hopefully it'll go in the next Bourry Box firing in May. 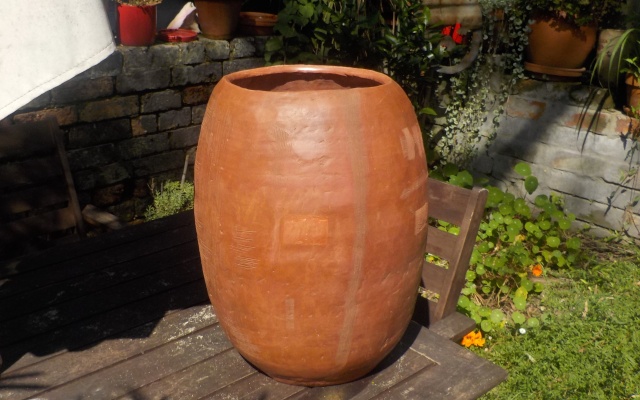 Very impressive Tony! You are doing so well. All I have ever managed was a small bowl, and then my back stopped me from doing any more, but I am hoping to overcome that in the near future and have another go at potting.

Thanks Anne - I've heard of a yoga teacher who has devised a series of exercises for potters to counter the effects of working on the wheel. I think she presented a Yoga For Potters class at a pottery symposium here a few years ago. For some potters there seems to be a degeneration from working at the wheel to needing a stand-up wheel to giving up throwing completely.

No problems from this old girl. Just get on and do it. But then I don't have any health issues, so I guess I'm extremely lucky! I should appreciate this fact, but I don't as there are so many other things to think about that I can't do anything about, but they keep me awake in the small hours. 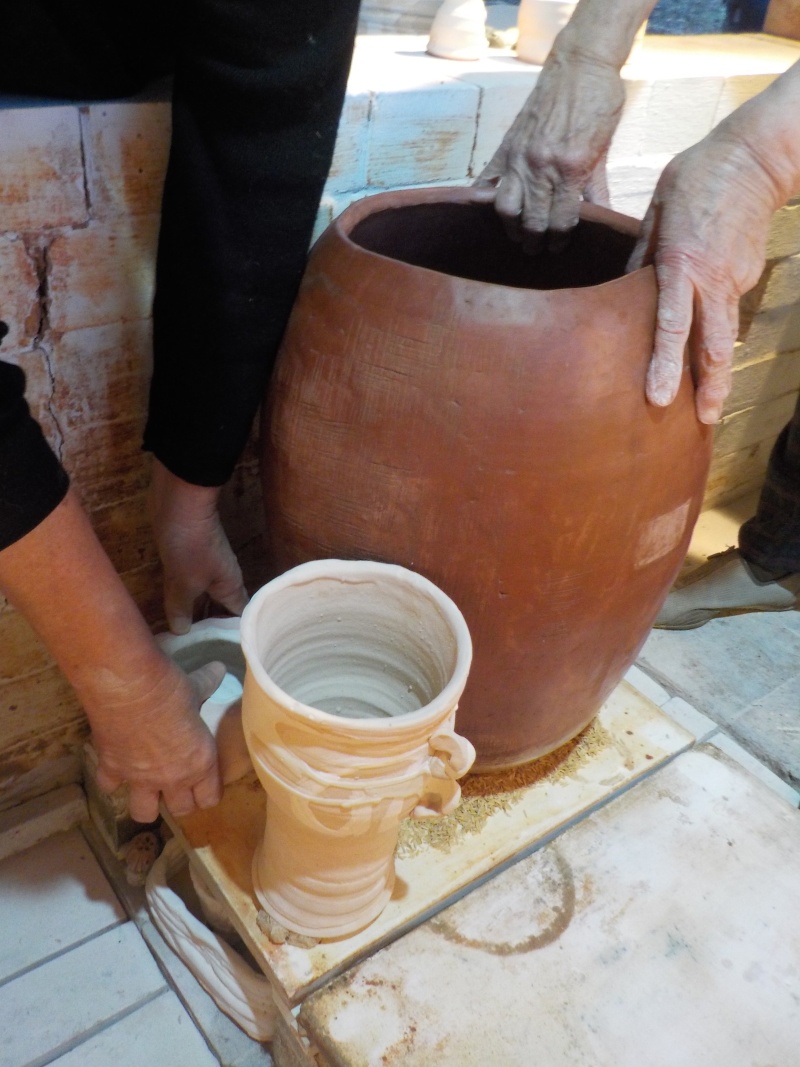 My pot getting positioned for the firing. 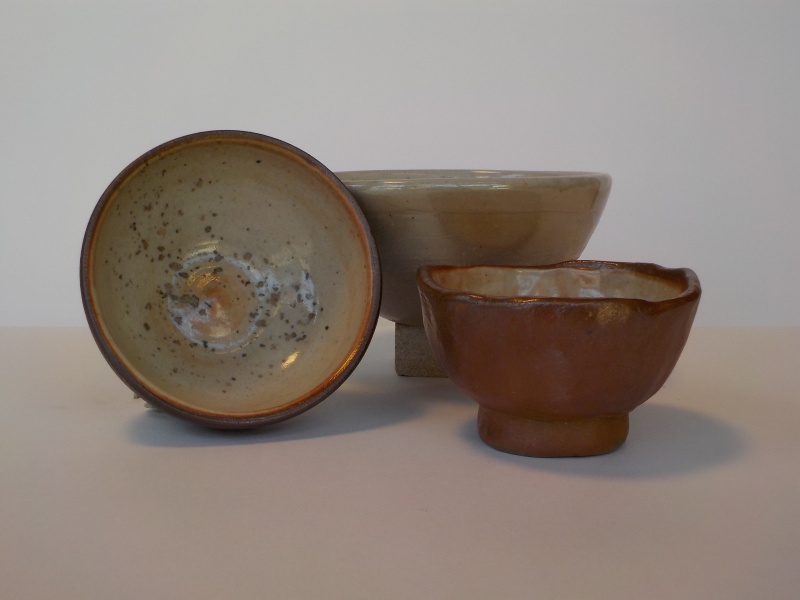 Pots from the last Bourry Box train kiln firing - they're used as the cover photo for an Inner West Collective's page.

This is so wonderful to see Tony. From your first fired pieces to now are great leaps and bounds, even getting onto the cover of a page is awesome.
I notice your big pot sitting on grog and can understand why. Does it have wadding too, like the pot beside it has?

It's sitting on a bed of rice husks. There are three different kind of wadding used - one made of Hallam clay and wood shavings - one of another refractory clay body and grog (I think) - and another used solely for the top of props for shelves to rest on. The wadding was pushed on to a blob of PVA glue and sometimes shells were pushed onto the balls of wadding. Shells were also used to separate pieces that risked kissing or touching walls or shelf edges.

I have a solo exhibition at Inner City Clayworkers Galllery in Glebe. The Cooperative is closing after 34 years on February 5th and my show is the last one.

I can't make the new photo loader work but the show is here: http://www.clayworkers.com.au/

Congratulations Tony you have come a long way in the last 7 years and this exhibition is appealing and interesting.  Bravo !!  Well Done !!!!

Well done Tony, you have made amazing progress, my hat goes off to you!

Another batch of wood fired pieces. 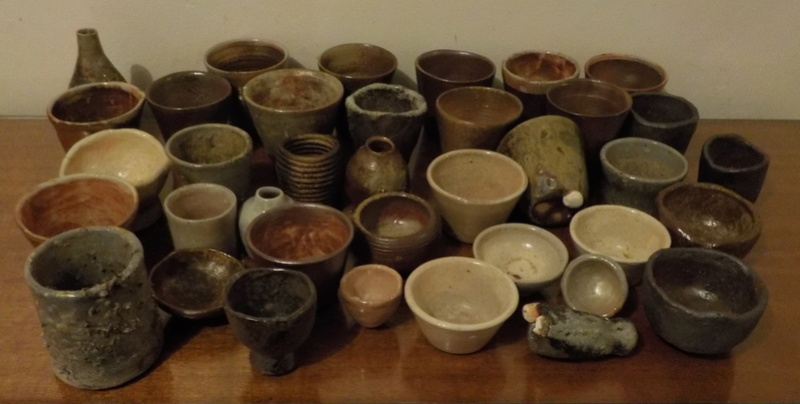 Lots of variety of finish results Tony, have u glazed any & how?
We are getting pieces ready now for woodfire, I just wondered if you had any special finishes/results.

I dipped the outside of several of them in a shino that my s-i-l Jen Lyall makes to a Janet de Boos recipe and brushed shino in the insides of some. It gives colours ranging from creamy white through blue greys through browns to a brick red depending on the thickness of the glaze, the clay body, and position in the kiln.

Other potters in the group I'm part of used chun, tenmoku and celadon glaze. This kiln has been fired 8 times so far and for the last three firings there have been digital pyrometers at the front and rear of the kiln. There is an irish wood firing magazine The Log Book http://www.thelogbook.net/ and Jen and another wood firer Ursula Burgoyne are writing an article for it, an update of an earlier article by Ursula, describing the process of a split firing broken with a gap for sleeping between two days. This firing the kiln was lit at 7am Saturday fired until 9pm that night with stoking begining again at 7am Sunday and finishing at 8:30pm. The kiln had dropped 500C overnight.

I used "wild clays" for a few pieces some from Lovett Bay where my wife's family have a bach, some from a backyard in Glebe and some from the mud in Blackwattle Bay down the hill from my home. They seem to be terracottas with high iron content and the below the high tide line ones are salt saturated. Over the firings Jen has built up an idea of the hot and cold spots in the kiln and has also got advice on kiln packing to allow the optimal ash and heat movement. Over the weekend one of the group worked out that hardwood fence palings fed through the front right sidestoke port was the best way to lift the heat at the rear of the kiln for the final few hours. There were pairs of groupings of pyro cones at four points in the kiln which were monitored through spyholes. Notes were taken during the firing of the shapes of the cones as well as the two digital readouts.

I think this firing was the most successful at getting even heat front to back and getting the high rear cool spot up to cone ten. Some of the potters used porcelain clay bodies and some used raku clays. A few raw pieces have been included in past firings. My sense is that the results are based on guesswork and good luck on a foundation of experience and time. Most of the technical discussions went over my head but I made a lot of tea and coffee and carried a lot of wood.

Tony,
Having just spent the last ten weeks assisting in the building of a large bourrie box kiln at the a Quarry Arts Centre I find that I am likely to be in Melbourne at the time of the first firing, so I may have to wait until a second firing later in the year to report back on our technical information.

This is the fourth kiln Mike Regan has built but even he is unsure of what to expect from it. We do have an expectation of cone ten in the chamber, obviously, but have shelves in the chimney for earthenware or possibly bisquing in later firings depending on what temperatures we reach there. The original design for this kiln had long throat arches, intended to produce anagama-like results but the built kiln still has a reasonable throat length into which Mike will be placing selected pieces: they should get a thrashing!

We have had a go at drying the kiln prior to first firing but have only raised the temperature slightly using gas burners in the firebox and a small fire in the chimney. The latter has really made the kiln roar so we know have a good draw and may even need to damp it during the firing.

Amorangi Hikuroa, one of the Quarry's clay artists, will be mixing a shino to a Greg Barron recipe for general consumption and Mike told me today that he has three glazes made many years back by the late Jan Gillespie. I have tested my own ash glaze (Avondale clay and ash from Kat's fireplace mixed to a Simon Leach recipe) at cone seven with curious and unexpected results so I'm keen to see where it goes at cone ten. Mike has made an ash glaze (different clay and ash but the same 50/50 recipe) so I'm looking forward to the results of that too.

Like Kat, I am amazed at the variety of effects you have produced and hope that we will have similar to show you in a fortnight.

I will be submitting pieces in earthenware (for the chimney) and stoneware, some raw clay some bisqued and some even going in for a third firing, but because I will not be around next week I only have my ash glaze to work with.

Hi Jeremy
The kiln unpacking is like Christmas morning and you never know whether you're going to socks and underpants or a MacBook. I had three pieces in the ports between the firng chamber and the chimney at floor level that were wild clay with a shino glaze and that ended up looking like roughly cast iron. A small shino glazed white stoneware beaker ended up looking very refined and subtle in comparison. There's always a lot of discussion about packing to get the optimal movement of heat and ash. Pieces fired in or near the mouth of the firing chamber can be very feral and heat distorted and high near the chimney shinos do not perform well.

One of the wood firers who visited during the firing suggested the kilns have minds of their own and can act out of character in some firings. My impression was that he thought eight firings was about when you could start to have developed some understanding of the nature of a particular kiln. It also seems that as well as a lot of technical knowledge there was also a lot of guesswork and hoping.

This is my work that was in a wood firing at Auckland Studio Potters that I took part in around the year 2000. It was 100% successful and was an exhilarating but tiring experience and Peter Lange kept an eye on our progress. I used a lot of glaze and loved the flashes from the ash and fire. 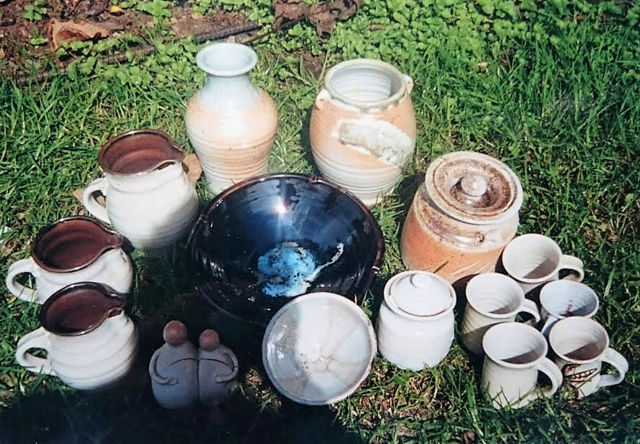 Nice work Ev. Is that chun in the bowl in the centre?

I don't think I have ever used Chun Tony, I can't recall what that glaze is. I know I used a lot of Shino, but it only got hints of orange as it may have been too thick.

This small jug had a brushed shino inside and a dipped shino on the outside with quite different looks depending on the thickness. 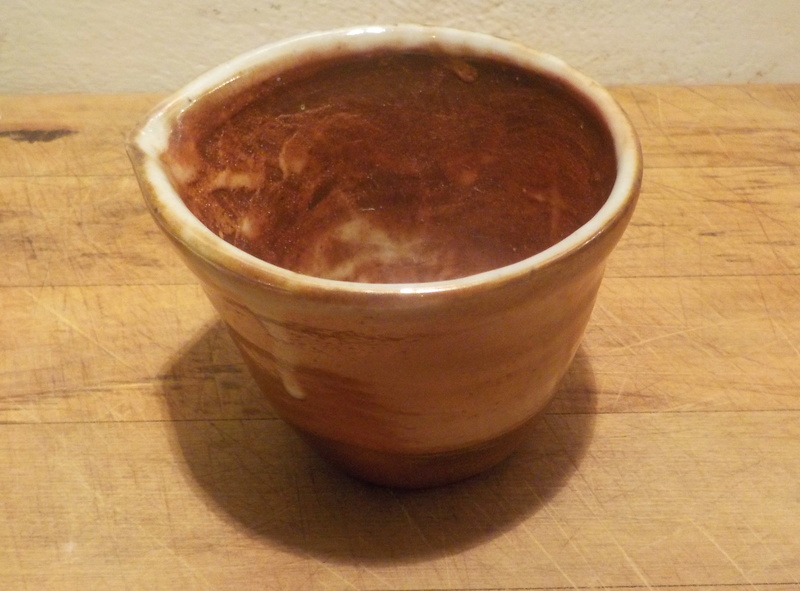