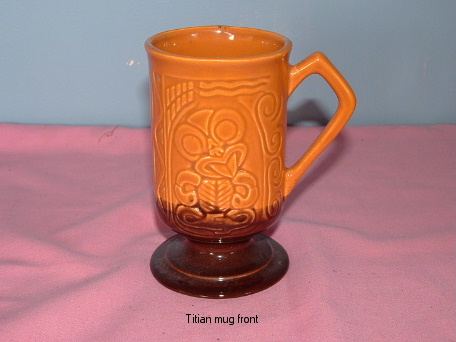 Hon-john was right all along!

Ev, I have led you astray.

Despite the orange glaze and "Orzel" looking handle, this mug has a genuine "Titian" mark (and maybe initials MR).

See the last photo in this auction:
http://www.trademe.co.nz/pottery-glass/porcelain-pottery/crown-lynn/cups-saucers/auction-691965829.htm

Auction price is cheap and I'm tempted but I don't like paying postage for damaged pottery.

Well done Jeremy. I thought that glaze would have been Orzel as I've seen it on the basket weave ware. John did say it was Titian and now seeing that Titian stamp on the base, yes he was correct. I like the way that things work themselves out over time and so many things come to light.

Ev, More thoughts on the trademe mug after after our discussion on Hobby Ceramics.
The base mark clearly shows Titian but there is also "MR" scratched into the rim, the whole base is glazed and shows the tell-tale triangle of stilt marks.
Were Titian items at this tine marked by the maker in this way?
Did Titian glaze the bottoms like this?
My limited experience tells me that Titian left foot rings unglazed.

I recall that Titian didn't do a first bisque firing like Crown Lynn or any other pottery that I know of. This would take a lot of skill I reckon. You really need someone who knows a lot about Titian to ask those questions. Someone like haselnuss or mumof1.

I don't know about that mug. I have quite a bit of Titian now, and have never seen any initials on them. The mug is more likely to be a hobby ceramics type I think. I noticed that it is a little wonky, for want of a better word. However, I am no expert on Titian, and, as is usual on our journey of discovery, have been proved wrong many times. Many of the Crown Lynn pieces, mostly vases, have 1 initial on them, but we don't know what they mean. To have 2 initials seems suspect to me.

This trademe seller has many lovely pieces of Titian for sale but the two Hei Tiki mugs cause me some concern:

They both show two characteristics often seen on Hobby pieces:
The foot rings are glazed, like Hobby, but not typical of Titian.
They each have three stilt marks on their bases.
Also, one has what appears to be "SS" scratched into it.
Val gives some pretty good examples of the stilt marks in her Hobby Ceramics topic:

The colour of the glaze looks like it could be wrong, but it is actually very similar to that on my Titian Intercontinental mug:

I would love to get a Hei Tiki mug one day but so far those I have seen on trademe, these two auctions and the one mentioned above make me very cautious.

The same or a similar Hei Tiki mug has been listed by different seller.
http://www.trademe.co.nz/Browse/Listing.aspx?id=775358832

I also think that the three stilt marks are not common on original Titian pieces.

But I own a blue Urn vase that was sold to me as an unmarked Titian vase. It was cheap and I took the risk. Anyway, the weight is ok, I compared the weight with the same Crown Lynn shape.
It is professionally glazed inside and out, has age crazing and then the three stilt marks on the base which I did not expect at all.

The Auckland international Airport Titian mug, that I purchased of Manos, is a little uneven/wonky on the top rim and the sides are not all straight either.The Tnb.306. has very wonky sides.

I also have a V.177. vase that has green speckled glaze which is on the outside and only a little on the inside at the top which looks untidy. The base is also covered all over in the green glaze including the rim. I am pretty certain that the vase is original and not hobby c. because I have seen a few hobby ceramic ones in the V.117. shape and they are heaps lighter.

And then there is the Titian Studio Jug from dollcrown in the gallery in a similar green to the Hei Tiki mug.

I'll get hubby to take pictures over the weekend.

The Hei Tiki mug for sale IS exactly the same one that sold earlier in the year. I commented at the time about it possibly being Hobby and am still not sure.

I'm feeling a greater need to buy it now but can't remember the earlier sale price. I think it may have been $30.

These new pictures may help or just confuse further:
Does anyone recognise the glazes on the two shiny-bottomed vases.

The spots on the green one make it look Hobby to me, but the blue one is quite an even glaze.

This Titian shape is sold by one of the greenware outfits, without a Titian mark, and appears regularly on tm in this glaze.