Another project underway now, to find out what all of the Crown Lynn cup shapes are.  Crown Lynn cups have been used and will continue to be used by generations of Kiwi's.  I have gathered lots of cup shape numbers, but will need your help to identify them.  Will add a thumbnail of the shape when there is definite identification.

Lets start off with one of the most popular cup shapes - the 781 or what is now commonly known as the Tulip shape:

The coffee can shape has the number 782.

The 3610 shape was used for the Public Hospital ware.  I have one of these, but am not sure if there were other shapes in the range.  Here is the shape I have..

The 3019 shape was used with the following patterns:  Kashmir Rust, Rondo, Fleur, Milano Blue, Pageant, Albany, Clematis[Oyster], Corvette Brown, Taipei, Petula, Vila, Zambia, Blue Pacific, Topic and Strata.  I have a Clematis cup, so hopefully this is the right shape!  Would really like someone to confirm the shape that has one that goes with one of the patterns mentioned please.  The 3019 is the Shape 25 cup which was introduced in 1968.

Could the 3024 be an Apollo shape cup .. as it goes with Kismet, Moonglow, Kon Tiki and Kashmir.  Did they make more than one Apollo shaped cup ... as the 3072 is the shape goes with the white Apollo d14050 dinnerware ....?  Found that Athena Orange has the 3024 fluted cup, which is the Apollo shape in the records.  No idea why at this stage...

The 3044 is the Nursery Tales and Smurfs cup. It also belongs to Kirstie Pink, Kylie Grey and Kelsie Beige.

The 3050 mug belongs to Jasmine Flower, Duet, Pioneer, Chelsea, Spring Fair, Pampas and Homestyle.  This shaped mug was extensively made during the 1980's.

The 3061 cup belongs to Spring Fair, Jasmine Flower and Pioneer to name a few and is in the Classique shape which was first made in 1982.

The 3066 cup belongs to Duet, Chelsea, Pampas and Homestyle.

This shape is the Octagonal mug ... I have one somewhere in my files...!

The 3619 cup belongs with the Red Thistle pattern and Tres Bon.


The 3620 Mug can be found in these patterns Vitrified Teal, Mode, Plain White Vitrified and 2 Red Lines.

This is a work in progress, ..... woooo it's going to take some time!!!!!
[When this is further along, I'm going to try out a new serving host to put the Cup Gallery in, as Gallery space is low on here right now.  Wish me luck   ]
[b]

Although I sold the samples I had and have lost the photos when my last HD crashed I am pretty sure that the 3010 cup shape that you have listed is exactly the same shape as the eggcups in the same Hospital design, smaller of course.

I've been out of action due to phone/internet problems ... all fixed now phewww

I found a Pampas 3066 in amongst my cups selection

Are any of these shapes of interest Ev? happy to provide more detail if required, Cr

Somehow I knew you would have the Pioneer cup - shape 3061.
I have one but camera has gone kaka and needs a camera doctor!
The 4th pic in the top row is the shape 25 cup - 3019.
I will try to pick up the pics that you have posted.
Not sure about the rest, as I don't know the numbers for them ..... yet.

Thanks for your reply Ev sorry to read about the camera.
3066 shape cup is also used in Symphony Cream d24050

Testing out the phone camera and took a pic of the Pioneer cup ...
Is it my imagination or does mine look smaller than yours Jonno?
I will put them side by side to view ....
Think I've worked it out ... on my one the brown glaze goes a lot further down the cup, which makes it look shorter

I don't think yours is a forma shape Ev. The side of forma goes right down to the saucer where yours has an indent at the base. What do you think? 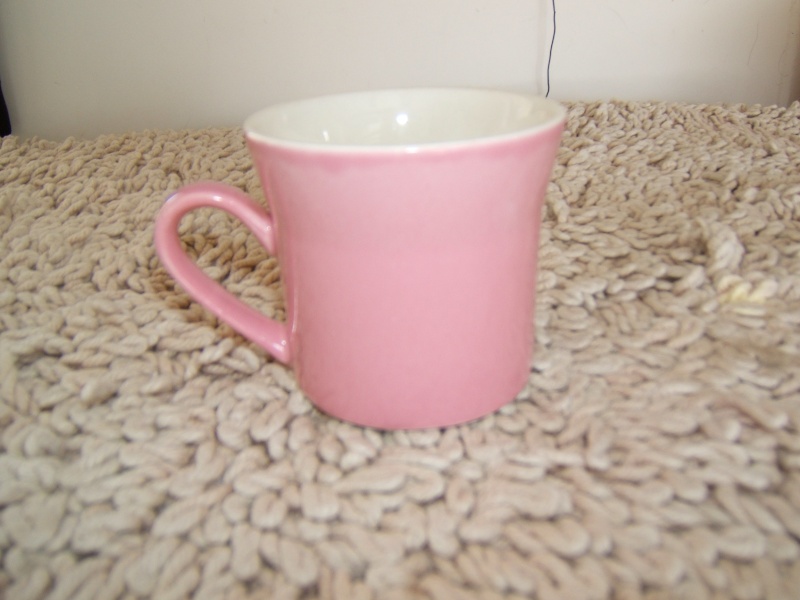 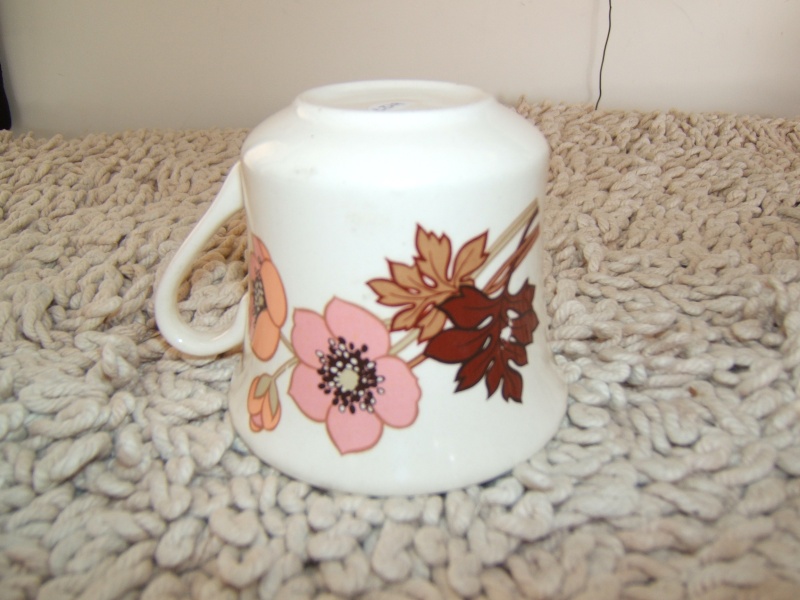 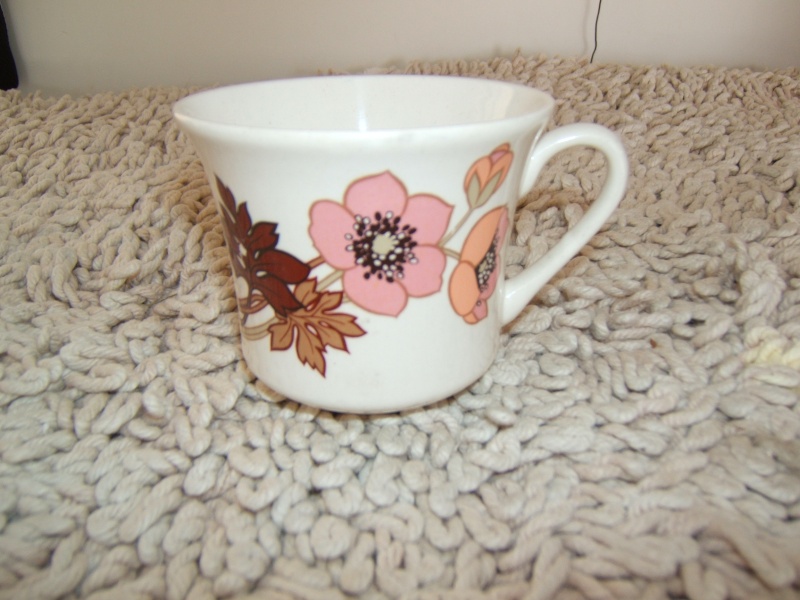 [/url]
The pink one is forma, the other I don't know. Cheers, marl

Hi Ev,
I agree with Marl I have two examples of the other cup one Wild Wheat that I have already posted on this thread the other is Sapphire here is a photo .

The Sapphire cup measures 87mm at the lip>to 67mm near the base curves to the lip and has a single locking ring. Can't measure the Wild Wheat as I have given my set to one of my grand-daughters.

The Forma shape cups measures 80mm at the lip and 69mm at the base but rather than a curved reduction is a straight bevel for about 25mm and then almost straight to the base, this bevel mirrors the edge of the saucer shape .
The Forma shape cups also have two docking rings one at the base perimeter and another inner ring of 48mm dia. and were called 'self-docking' (p114 Monk). This outer ring fits the raised center of the forma saucer.
Hope this makes sense.
The height is 74mm for both cup shapes.

Thanks to both of you, as I checked the catalogue and the Pioneer D.17400 set that my cup matches is in the Classique Shape. So this makes my cup and the others posted the 3061. There are no Forma sets in the catalogue, so I'm not sure of the number for the Forma shaped cup atm, but I will find out.

what shape would this one be?

I have some wild wheat cups if you would like measurements.

It looks like it could be the 750 in the Shapes Gallery, but I can't compare the handle. It's definitely an old three digit shape.
I guess I should add all of the old cup shapes to this topic and make an off-site Gallery.

thanks, I haven't got a 'handle' on the numbers yet!

just had a look in the gallery - forgot there were cups in there and it is definitely a 750, cheers! Now I just want to know what pattern it is lol

Sorrento is in the Forma shape isn't it? If so we have the Forma cup shape!
Will check current and expired listings on TM to confirm this ... *races off*
Don't recall seeing any Sorrento mugs though

The 3024 shape is definitely an Apollo shape as it goes with Apollo d013 as well as the patterns mentioned in the main post. Anyone have one of these?????????
So there are two Apollo shaped cups then ....
well, I can honestly say that I haven't noticed any different ones, but will be on the lookout from now on!!!!

During the last week I've added another 10 cup shapes to the Cup Gallery. Many of these don't have any numbers yet .... the search continues.
Just want to post these three shapes together to see how similar they are side by side and welcome any comments ....

They look like a match to me even though the photos and the sketch are on different
size scales, wouldn't it be great if one could push a key and they were on the same size scale for comparison purposes?

I agree that the right one and the middle one are a perfect match.
It's the handle on the teddy one that I can't decide about, as the handle seems to finish further up the mug - also seems to have a smaller handle angle ...
unlike the other two

Am I seeing things?

Did a bit fiddling by taking screenshots and then putting all 3 on a new screen at the same size, and yes, the two made cups are exactly the same as far as handle shape and position are concerned but the sketched cup shows the handle as the same shape but larger and fitted at the same distance from the top rim but closer to the base.

So the handle mould was modified from the original sketch??

A drawing is just a drawing and not the real deal hey ....
I will just keep the 772 cup on the right in the Gallery.

not sure what number the cup on the right is

this was a freebie from Junk & Disorderly 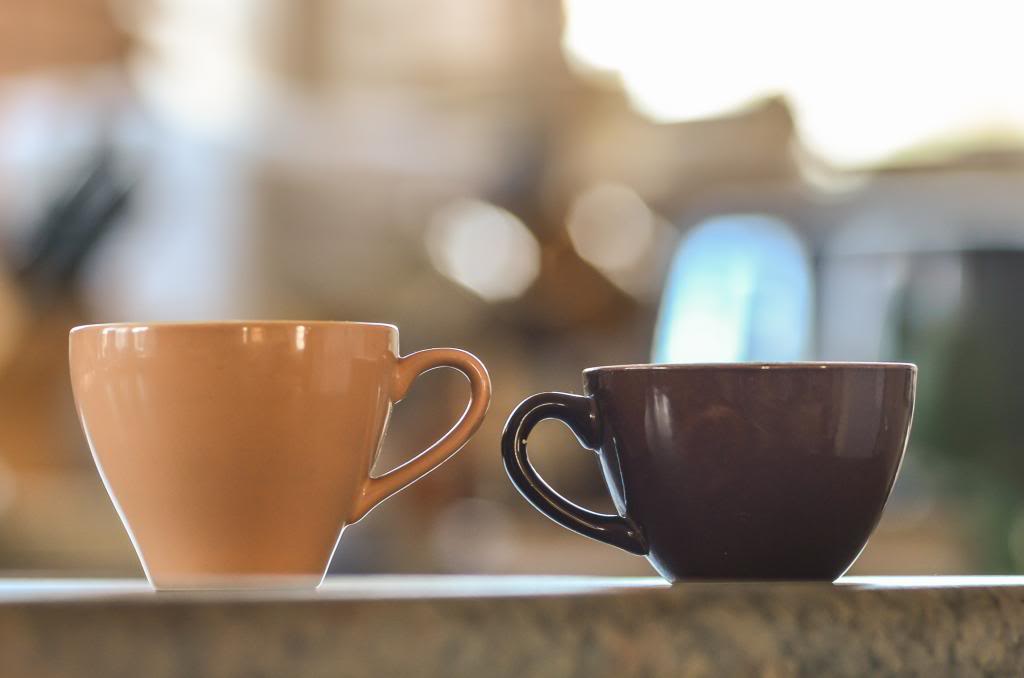 Do you mean Junk and Disorderly on the North Shore in Auckland????????
As I've seen quite a few pics from Auckland on your Flickr page I guess so.
Waaaaaahhhhh I want to go there !!!!!!!!

What are those two cups?
And what else did you get to be given those freebies ???? HUh ???