Which pieces of Crown Lynn were copied from overseas potteries?

No it wasn't numbered and it had the writing right around the inside of the foot on the base. The glazing was very different to what I have seen before. I remember that auction that you won and I believe that with the number 315 it was Crown Lynn probably finished by Salisbury, though now I wonder if the trader had seen one that was Made in Germany to compare it with.

I saw this teapot (centre pic) on a shelf at the Salvation Army clearing house in Oslo.

Immediately recognised the pattern as being the same as CL's 1179 Facets Coffee Mug from 1973 (top). Pattern and handle are a match. Maker is James Sadler and Sons from Burslem, England (see bottom pic).

Although the price only amounted to four dollars (I think), the condition and availability of room in my suitcase made it an easy no.

wonder who made these 3 then..no makers mark 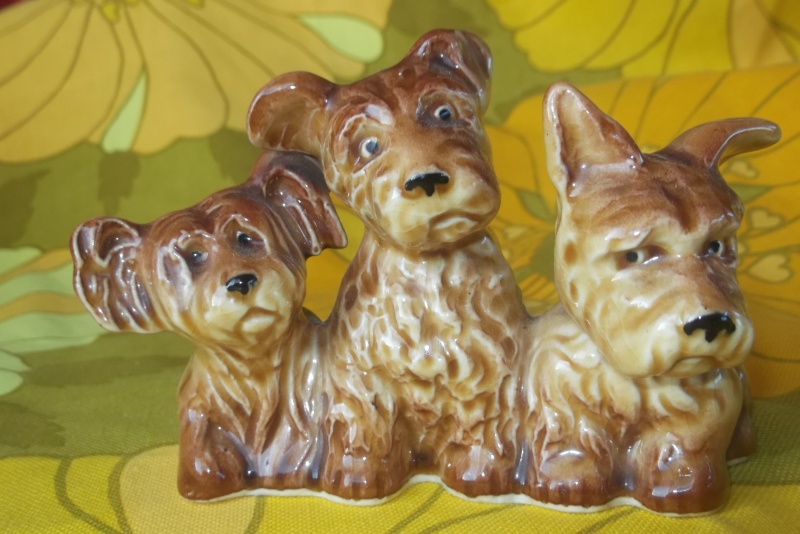 Hi cookreti, those three dogs often get called Crown Lynn, but the Crown Lynn three dogs are quite different. I would guess that these are British.

Yes having seen the real Crown Lynn ones last week at the mid-winter vintage markets realised mine are very different but non the less...still cute

I have never chosen to buy one of these as they are so big so illustrations will have to be by link. Oh, here's mrnarna's one from the site:

I had noted that Elischer Australia produced a set of graduated The McCallum jugs very similar to the Crown Lynn one ...

... then I remembered an experience from the life of our dear departed Graham Sharpe. Before coming to work full time at our house Graham had shared a shop in Whangarei as a second hand dealer. That was how we met. Graham eked out a comfortable living as a dealer but never got rich at it.

Graham once picked up a "The McCallum" jug, thinking he had another piece of CL to sell in the shop. On closer inspection he realised he had a piece of Doulton. A sale on ebay netted Graham enough for a return trip to see family in England.

That's a great story Jeremy!
Hon-john had the same luck with a pair of Jane Brenkley pieces that he found while opshopping and went back to England for a holiday.

I have found a third variant of the shape used by Crown Lynn for its Coronation cup/mug.

I have already written about the third image.
https://www.newzealandpottery.net/t4268p15-which-pieces-of-crown-lynn-were-copied-from-overseas-potteries#24765

The image on the left is a screen grab from google images that turned up when I was searching Elischer, looking at McCallum jugs. The original is no longer available. I originally thought it could be Australian but a bit more digging produced numerous examples.

The first gave me a pottery.
The seller, "Robbins' Roost Antiques" of Nashville Tennessee, gives the measurements as 3in H x 2.5in D, and says that it is marked "KSP", but unfortunately there is no photo of the base. USD35 + shipping if anyone wants it.
http://www.rubylane.com/item/20735-1901/Queen-Elizabeth-Coronation-Mug-1953

"KSP" led me to Keele Street Pottery and a third example:
http://www.ebay.co.uk/itm/KSP-england-keele-street-pottery-embossed-mug-elizabeth-II-coronation-1953-/161782955961?hash=item25ab03ffb9

I have found some others as well but this one on etsy shows the base:
http://madammillipede.com/Sports/iphone-4s-cases-nl.asp?listing/196940003/1953-ksp-coronation-mug-cup-queen?ref=related-0

Keele Street Pottery may prove to be a source for other CL shapes.
Here are some histories:

One aspect of KSP that stands out is their production of single-fire egg cups pre-WWII as German-made ones were taken off the market.

plastic or pottery: which came first?

(It's not an overseas pottery reference but I think this topic will do.)

Although it was $2 for an old plastic mug I couldn't resist this find at the Mangawhai community opshop a couple weeks ago. It was a very familiar shape!

This reminds me I have an orange bellows mug that I should photograph and add to the 1372 topic: https://www.newzealandpottery.net/t5317-blue-bellows-1372-which-castware-mugs-are-genuine-titian#19973

Similar topics
» Which pieces of Titian pottery were copied from overseas potteries?
» Crown Lynn copied many of the English Potteries ware ...
» Could this large vase be Crown Lynn?? Not Crown Lynn as it was made at Timaru Potteries.
» Crown Lynn bits n pieces from Jim
» speaking of forma? Marl says it's Tosca. Also Tosca pat.no.927