This is a different Tureen Shape..

or is it the Bell Shape Casserole?
http://www.trademe.co.nz/pottery-glass/porcelain-pottery/crown-lynn/other/auction-728585597.htm

Well I thought that this was the Forma casserole, but I'm sure that Cresta is the rimmed shape .... Hmmm.

I have a Ming tureen in this shape so can be pretty confident it's not Forma shape.

This is why I thought it was a Forma casserole -

I hope this link from the Museum works!!

Mix & Match with some patterns maybe.. as I wouldnt have thought the gravy jug Forma as its dorothy thorpe too.

You could well be right about the mix and match casserole though .... ?

Yay the link worked Ev. Well done. Does this advert have a date?  I have a big serving platter in this pattern and I don't know if its my imagination, but it seems a bit more rounded, a slightly different shape from the Forma platters I have in the same size. It fits more neatly into my Magnolia Moon platter which is also 1980s. What does this mean?  Dunno. But yes it is possible that they carried the 'Forma casserole' shape thru into the late 1980s.  By this time  the design department was no longer the force it had been when Jenkin and Cleverley were there.

Regarding your last post Maryr - is this what you are referring to ????

I have dug out my notes from Percy Golding.
He included a pic of the shapes for Contemporary Ceramics, a new range developed in 1982 and released in 1982/83... not sure of the exact date. Percy says the shapes were by Tom Arnold, who was CL head of design at that time. 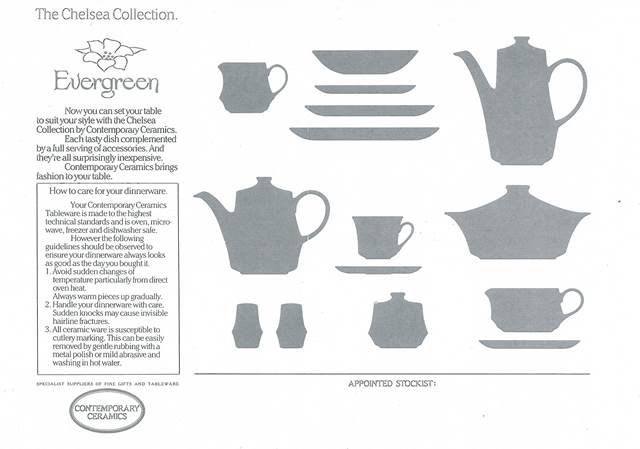 Percy definitely includes a vegetable serving dish in his list of new shapes for Contemporary Ceramics.  BUT the dish illustrated here looks very similar to the lidded dish in the Kashmir Rose Forma range from the Auckland Museum (as in link provided by Ev above).  Forma was first released in 1973 so I can only conclude that we have two lidded serving dishes which are very very similar in shape - one Forma from 1973 and one Contemporary Ceramics from 1982/83. I don't remember ever seeing a lidded vegetable dish in a Forma pattern - but we see one in the museum archives so they obviously exist!

As regards my big platters in Kashmir Rose and in Magnolia Moon - these are the same size as my other Forma platters but they are definitely a different shape, more rounded rather than the angular Forma shape. You can't pick this up in a photo but it is obvious when you get them together.  To complicate matters, my Kashmir Rose platter has the standard Forma mark on the base, and the Magnolia Moon platter is D 252, which is different from my dinner set which is D 609m, with the standard Contemporary Ceramics backstamp. Hmmm indeed. (see this link) http://newzealandpottery.forumotion.net/t4769-magnolia-moon-two-patterns-252-and-609?highlight=magnolia

So no silver bullets here. Maybe a person who worked there at the time could shed some light, but they are getting a bit thin on the ground.

I find all of that info extremely interesting. The shapes are all in the records as the "Classique" range ..... except for the Vege dish ... I can't even find it !!
Here is another photo from the Museum, this time it's Antique Rose another Forma shape that has the same shaped dish ..
http://muse.aucklandmuseum.com/databases/LibraryCatalogue/RecordImage.aspx?imagePath=f%3a%5cdata%5cdbimages%5cpictorial%5cph%5cph89-6%5cf%5cph89-6cn4.jpg&imageFormat=Positive+(Colour+Transparency)&originalID=122335&imageCaption=&Ordinal=12
Perhaps Kat is correct in thinking that this is the 8645 Bell Rim Casserole made sometime between 1981 and 1983 ...?

The date sounds right for the bell rim casserole... maybe they added it to the Forma range in the 1980s - um were they still making Forma in the 80s?
Hey another thought. I have some Seascape, which is in the Forma shape. It includes a casserole.  Is this (very common) shape the Forma casserole? 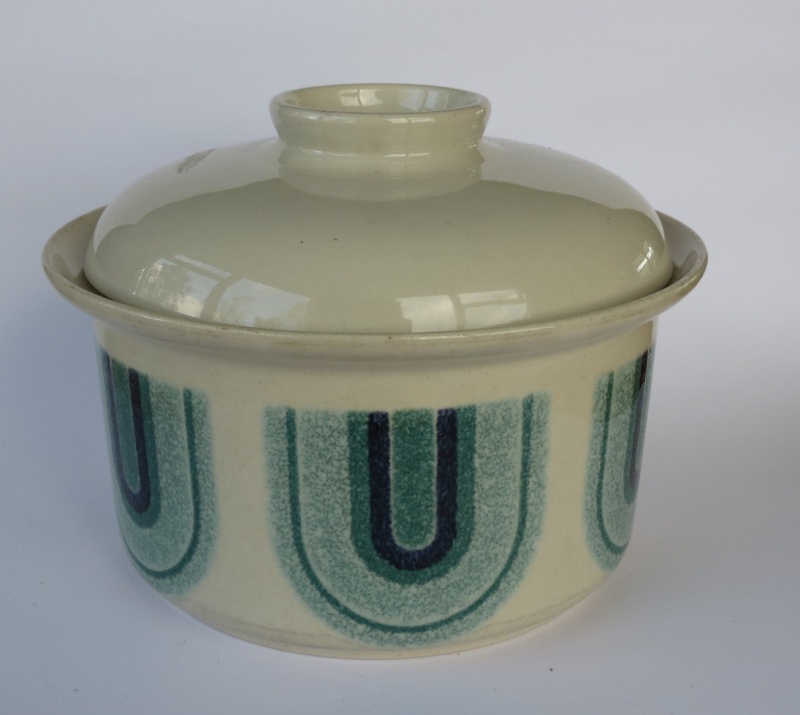 Maryr wrote: um were they still making Forma in the 80s?

Well they were still making Seascape, Last Wave and Blue Bouquet at the same time as Pirate Pete, Sally Anne and Tootle Train, so I guess the answer is yes to that question.  Now to ponder on that common shape to be the Forma Casserole, which is quite possible as we don't have shape numbers for those casseroles yet ...

Yay now I 'get' Antique Rose & the blue stripes on the rim,
..its all one pattern.

Kat & Co. wrote:Yay now I 'get' Antique Rose & the blue stripes on the rim,
..its all one pattern.

Old photos are really helpful for many reasons

Maryr wrote:The date sounds right for the bell rim casserole... maybe they added it to the Forma range in the 1980s - um were they still making Forma in the 80s?
Hey another thought. I have some Seascape, which is in the Forma shape. It includes a casserole.  Is this (very common) shape the Forma casserole?

My photo below shows the gallery item on the right (Sundowner d065) and a smaller one sharing the same lid size on the left (Interlude d085). It contains approximately half the volume, but I find the volume measures in the descriptions far from accurate so cannot tell which it is. (Up to the lid lip it holds the same volume as the 5620).

What they called these I have no idea.

Eds to say I mistakenly referred to 5620 as 5621 and have corrected this now.

Those are called Casseroles Jeremy, as they go into the oven and will have 6 for vitrified as their second number.  Actually your proposals on the shape numbers are most likely correct.  Does that small one hold .25 of a litre?

Val, your thoughts are prompting more thoughts .... thank you.
The "Forma" Casserole 5014 is not vitrified so would be made of earthenware clay and wouldn't be used in the oven and yet they call it a casserole ...?

Darned if I can find a photo and I know there is at least a couple.  It's the one that is this shape in the Spring Fair catalogue and Heather and Cat have pics ... 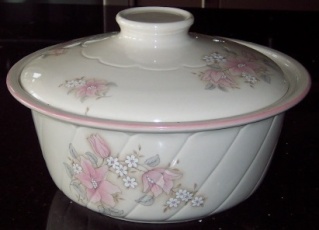 What I meant, Ev, is that I had no idea what style of casserole they are (Forma etc). The thread shifted a bit from the original tureen topic name. I use them for cooking, but would not dream of putting a tureen in the over.

You may remember that I had similar reservations about the 1649 stewpot that Val gave me as it too will not hold the stated 65oz. The number is clear on that one, therefore maybe the volumes stated SHOULD be taken with a grain of salt.

Supposing that Anne's one (and thus my larger one above) is correctly identified as a 5632 then the smaller one could only be the 5631 "Onion soup .25 litre". Whilst calling a container that holds 700ml a 750ml casserole is I mild exaggeration, calling one that holds 300 a 500 is beyond the pail.

These two sizes share the 5633 lid with the 5642 ".50 litre casserole". I cannot imagine that there is one even taller than this with the same lid so I am going with the 5632 being correct and the smaller being, as you suggest, the 5631, despite the rather odd name.

If Val can provide some measurements for hers it should be easy to put a number to that too, and its lid of course. I will check the size of my Auckland ones over QBW.

These casseroles have been knocking round the forum for so long it's great to think we are getting them sorted finally, and once all FIVE are in that will be a big hole in the gallery filled.

Well there you go! Ten points Ev for finding the bell rim casserole. And Jeremy I will dig out my Seascape in the next few days and measure it - but I don't think these measurements are always totally accurate, eg I have two mugs, both with the same number, and they are a full 0.5 cm different in both height and width across the top. Ergh!

I think Val's is the same one.

And here's a Seascape one with pattern on the lid!

My decision to say that Val's casserole was the largest one, in the absence of measurements was based on the calculations from the trademe example, and the relative proportions of the knob to the whole lid, which appeared to match the larger, rather than the smaller lid size. Plus of course Val's description as "casserole" rather than "mini casserole" etc.