I picked up another of these small containers recently and was surprised to see a Made in Taiwan sticker on it. It looks to have been on it for a long time as you can see the marks where a small piece of the sticker was that matches the shape of the other end that is intact. Any chance of these being Taiwanese or has a sticker just found its way on to it.
I bought a large Adelaar jug from a dealer the other day and he had stacked up all of his brown glazed pottery together and there was a piece of clearly marked Taiwanese that almost identical to the Adelaar jug glaze. I didnt get a pic but I might if I go back again. 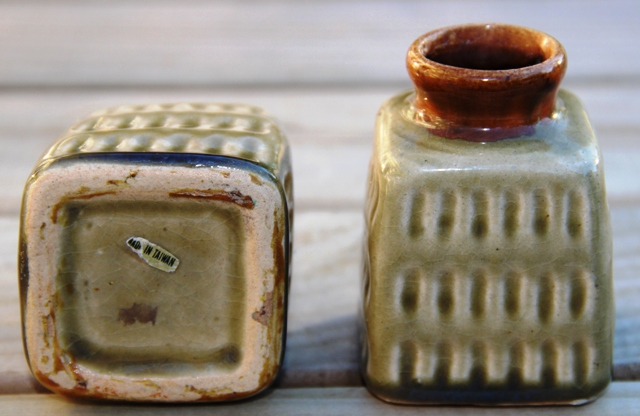 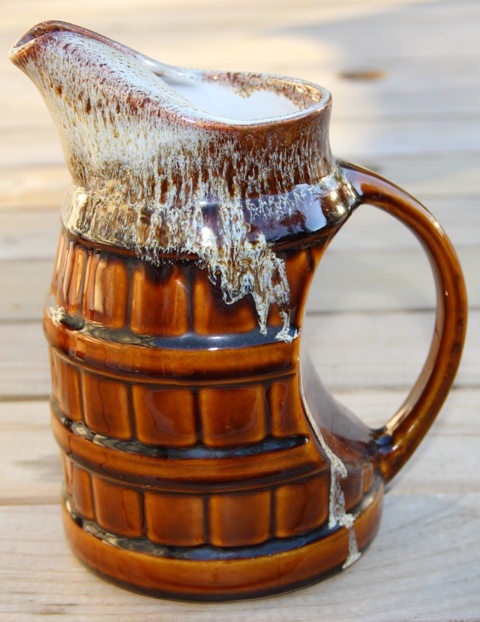 And the large Adelaar jug.

How very interesting to see that sticker Mike !!!!
To me it solves the mystery and it didn't seem that long ago that heaps of stuff came here from Taiwan.
That certainly is a lovely jug!

So you do think the little pots are Taiwanese?? Yes the jug is lovely..I had seen it in the gallery and in some earlier posts and just couldn't leave it for $15. It is well marked as well. The Taiwanese mug next to it in the shop was very similar in colour and glaze.
Could you offer an opinion on the small pots below:

Yes I do think that the lovely little bottle is Taiwanese as I have some pieces with Made In China stickers like that.
Perhaps the fourth along is Clay Craft?
No ideas about the others, but perhaps someone else can help.

in your picture the least short of the vases, in the yellow and brown, does appear to bear the KilnCraft colours, perhaps a bit pale on top but maybe that's in the photo. I think Val may have mentioned a variation in the glazes on some items.

In my weekend travels in the Waikato I saw a piece, can't remember what it was now, that also hade the Orzel/Adelaar frothy-coffee glaze and had, I think, "Japan" impressed. I have also seen a Japanese whistle mug in same, but on red clay. That glaze must have had universal appeal.

If the "inkwell" is Taiwanese then the other flowery pieces Janice and I found may be too. ???

Hi Jeremy
That tallest little vase has photographed lighter on the top so it probably is what you suggest, thank you.
Would you hazard a guess on the items underneath. I thought I had seen the mugs on the forum but can't seem to find them now. I already have a couple of marked Clay Craft angled storage jars that are different to this one. This one is smaller and is similar to the Clay Craft one in the gallery. It is smaller and has a more pronounced rounded rim than the ones in your posts and the ones I have already marked Clay Craft. The glazes do look like Clay Craft tho??? 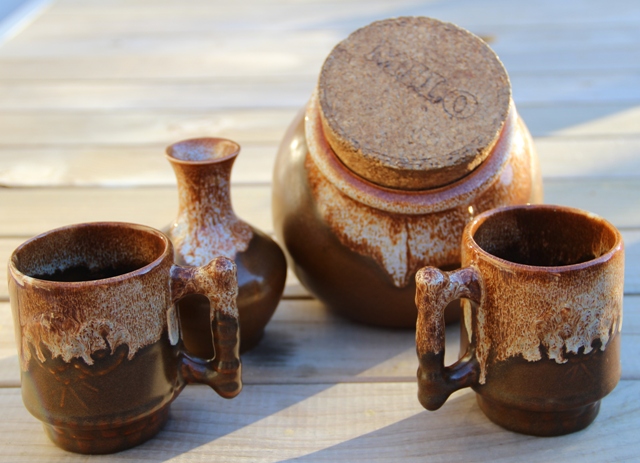 Mike,
All items appear to have the same CC glaze.
Linda, my Clay Craft advisor, told me the spherical canisters, like many CC shapes were made in many sizes.
The vase is a standard sort of shape used by CC amongst others and likely theirs.
The mugs are a new shape to me, so I will asker her about them next visit, which may be this week I have something else to show her of my own which I will post when the sun is up.

When I last visited I mentioned your previous two queries but did not have the iPad for photos. The octagonal vase appeared to have hollowed sides and Linda said it was not something she recognised from the sound of it. I forget what the other piece was but I will check later.

Hi guys this mug has very recently come my way. Marked Kiln Craft which you can see if you hold your mouth right.. So Mike's mugs are from this stable for sure. An interesting shape. 9 cm tall. 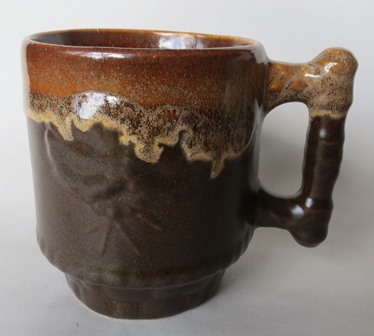 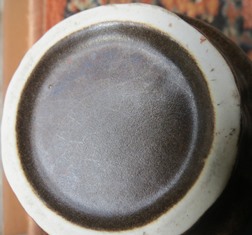 Thanks for naming these Val.

This one is a bit clearer. (But still ugly!)
You can see the whole design, including handle. 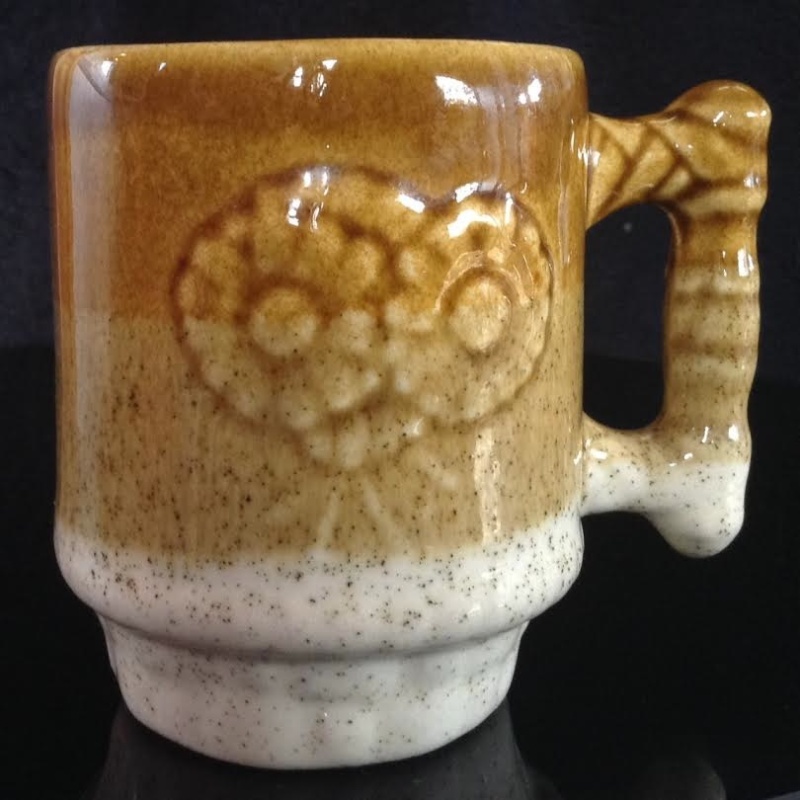