Hi all, I found this yesterday at the local recycling shop. It is unmarked on bottom but I imagine that I can see a faint raised area where Made In New Zealand would be. It is a lovely pale pink, mottled, not at all like colourglaze ware. Can anybody confirm that it is CL for me please? 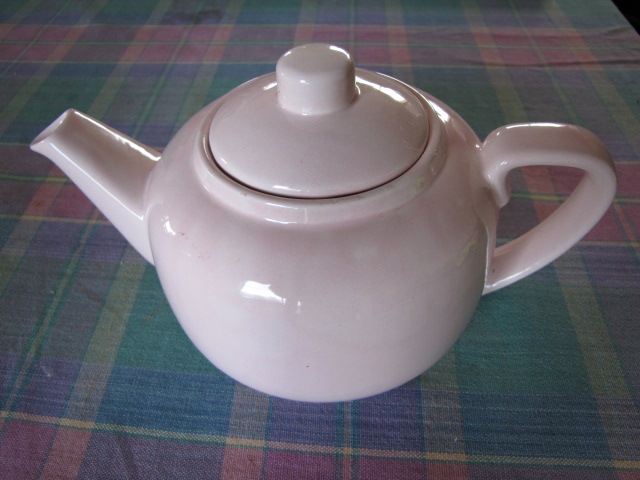 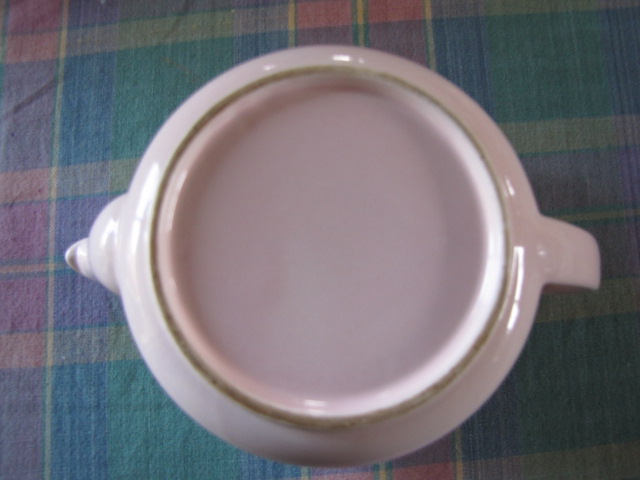 Thank you Ev. I think it will go straight to the pool room! For ages I have been saying to all and sundry that my life would be complete if only I had a teapot! I almost did not buy this one as it does not feel like vitrified ware, so I judged it to be English perhaps, but for $2 it came home with me anyway, mainly because I liked the colour. I have seen the same shade of mottled pink on those little vases CL made.

The body of your teapot is a Shape 830, but I'm not sure if we have the number of your lid as the 830 in the records has the recessed lid, but the same body. I will have to look into this when I get time.
I seem to recall you bemoaning the fact that you didn't have a Crown Lynn teapot

Great find, Thelma. For all my vit tea and water pots I don't have anything similar in earthenware.

Yes, it is just like the Topaz, so a real bargain.

I did have a 1616 with the older 830 style lid (pretty sure it wasn't the 830 shape body) and have seen them elsewhere, so I'm not ruling out the possibility of a revamp of the 830. Anything in the modellers' books?

I'm not sure when raised Made in New Zealand started but on the tulips I think impressed marks began 1963 and raised marks much later.

I looked at the shape 830 and I think the handle on my one is a bit more rounded, exactly like the Topaz one that was on TM and the one with For Barbara's on bottom methinks?

I just looked at an old post that mentions 1220 as being like the vitrified pots but earthenware instead. perhaps that is the shape number for this pot?

I was looking forward to using this pot but I think I had best leave it alone as, being earthenware, it would probably crack or craze. The inside looks mint! Oh well never mind. I will just stare at it lovingly.

Could this replace it now?

Yes ok Jeremy. Thelma it would be perfectly ok to use your teapot really it would as it has been fired to at least 1180' which is much hotter than boiling water isn't it .....

It would just pay to pre-warm it to avoid heat shock.

I do that with earthenware cups and mugs after past "shocking" experiences.
You can actually hear the glaze go "ping" when you you shock-craze a piece of earthenware: it's not nice to have your crockery tell you that you've been careless.

I know the feeling!

I washed the cup on my bathroom set and felt it go crack as I was drying it, glaze very fragile on those sets!