Latest topics
» Shape 21 Handpotted was made in three sizes.

» Need help with identification of mark. It's by Elizabeth Woodfield

» Double handled urn vase was made by Orzel

» Please help identify these. These were made by Kermiko

» PLEASE HELP TO IDENTIFY - MARKED TO BASE

This was sitting on the dining table as Jim sat Val, Kat, and I down to tea.

Kat read off the number and checked the gallery: "It's a saucer."
I knew just what saucer 734 was, the vit demi saucer.
I made excited noises and chattered. 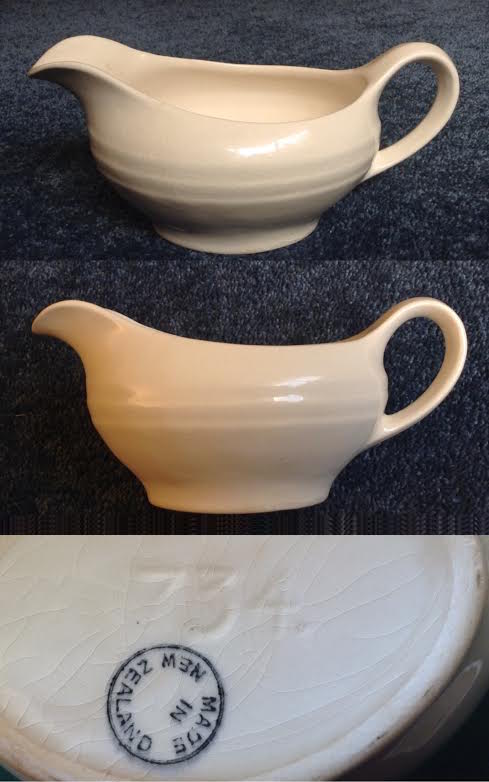 This is a totally unexpected discovery of yet another early shape for which the number was later given to a new shape. As keen as I am on early CL I wouldn't have taken much notice of it by myself.

Footnote: the other 734
Round about 1960 CL redesigned its demitasse duos which until then used the same mould for e/w and vit (773/774). The vit cup was beefed up (remaining as 773) and the e/w cup was replaced with the mini-South-Pacific cup which was given a new number (859). The e/w saucer was replaced with a new coupe shape but retained the original number (774) and the vit saucer was given a rolled edge and new number (734), that is an old number from a redundant shape, the gravy jug
.

Fantastic guys!!!
Thanks to Jim and everyone as these early shapes don't show up very often.
Great work !!

I have just won a 719 jug that matches this 734 Gravy Jug and it has a faint Made In NZ on the base so is from the 1940's.
A significant find as we don't have this shape recorded anywhere.

ps. I wonder why your photo above disappeared Jeremy?

I went to edit, didn't do anything and returned and it came back ???

I was watching that jug Ev so I got the notification when your buy now appeared.
I almost bought it but saw it was your request.

Your 719 deserves a new topic when it arrives.

The three bands match some of the early cups, AND the later Paris pattern so I'm thinking it is the original Paris.

How odd ..... your photos show up now.
Thank you for leaving the jug for me Jeremy, as I couldn't get back to the computer for a time after asking for the Buy Now and hoped that it would still be there.
Yes I will start a new topic for the jug when it arrives.
I hadn't considered the Paris Ware idea, but it is very feasible.

By the way I saw you bidding on some 'crimped' pieces recently .... any photos?

I saw you were taking a while to get back and with the same fears almost bought it for you Ev. Glad you got it.

I also left the Greengables mug for Brooke as he bid first. I'll get some photos when that arrives. It was hard letting that go. Bronwyn the Greengables collector was also very keen, bidding Brooke up to $181 I think.

I do have a yellow crimped trio but have not taken my own pics yet. All the shapes have already been posted I think but I will add mine.

It's the crimped plates that we don't have Jeremy and they will belong in the Gallery somewhere.
Gosh I stopped watching the Green Gables mug ...... WOW.
I met Bronwyn at Whangarei that time I was up there.

Turns out I did take a photo and added it as an edit (because we had the shapes):
https://www.newzealandpottery.net/t6186-pink-753-with-crimp-edge-saucer-photos-added#27219

Re Brownyn: yes, I introduced you!

Continuing with the idea of a "Paris" (3-ridge) dinner set, we have two numbers now, 719 and 734. We also have 3-ridge cup and saucer (possibly both e/w and vit). The existence of a gravy jug suggests there will be a complete dinner set, and presumably all with numbers in the early 700s, comprising say, three plate sizes, c+s, milk and sugar, gravy jug+saucer, p+s, and possibly even a tureen. Now all we need is a caWWII newspaper advertisement for an Ambrico Paris dinner set.

(This also gives us a further clue to the extent of the number substitutions.)